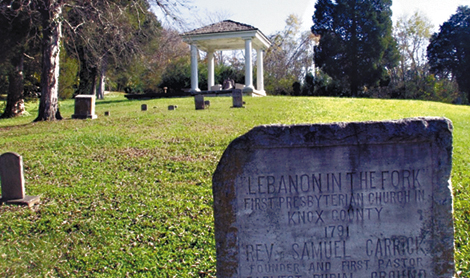 Photo by Mike Steely
Site of the Lebanon in The Forks in the Ramsey Community, the first Presbyterian Church in Knox County.

Throughout Knox County there are places that we probably know the names of but may not know why. This week The Focus takes a look at the communities and neighborhoods and how or why they got their names.

Some are pretty obvious, like Riverdale, Fountain City, Thorn Grove and Strawberry Plains. Each of those areas reflect the names of their location, aspects, or natural features. Yet some of our communities have names that are more obscure. Some names are based on early settlers or patriots and some name origins are still debated. We’ve chosen to highlight some of the places and mention others.

Robertus Love, an associate of Gen. James White, the founder of Knoxville, established a village about 1797 along what was then the Kingston Road. Originally called “Loveville,” time has altered the name to “Lovell.” The road and several neighborhoods now carry the name.

Mechanicsville got its name for the number of immigrants who were working in local mills as “mechanics” and the neighborhood took that name.

Ramsey, the community located in what most of us now call “Forks of the River” is named for the family of Col. Francis Alexander Ramsey who settled there. The Ramsey house is one of the area’s prized historic landmarks and is open to visitors.

Halls, also known as Halls Crossroads, was named for the Thomas Hall family that settled there and operated a business at the crossroads of Maynardville Highway and Emory Road.

Karns may be the only community named for a former school superintendent. As the area grew, a new school was needed and T. C. Karns, the county’s first superintendent, promoted the effort.

Ball Camp is named in honor of Nicholas Ball, an adventurer and trapper, who established a camp there that was used by people headed west through our region. Ball, a Revolutionary War veteran was killed in an attack by Native Americans when he was shot seven times before being fatally wounded. Ball Camp is said to be one of Knox County’s oldest communities. The Ball Camp Baptist Church was originally called the Beaver Ridge Baptist Church.

Campbell’s Station is named for Colonel David Campbell who built a fortified settlement there in the years before statehood. Although there’s a monument in the Pleasant Hill Cemetery in Farragut to Col. Campbell, he’s not buried there as he moved further west following the Cherokee Wars. Campbell Station today is part of the city of Farragut.

Farragut is named for Admiral David Farragut who was born near the river there and went on to become America’s first Naval Admiral and was a Union hero in the Civil War. He’s probably the most remembered for saying, during the battle of Mobile Bay, “Damn the torpedoes, full speed ahead.”

Inskip, Fountain City’s close neighbor, was named for the Rev. John S. Inskip who preached at National Camp meetings in the area in 1872 and 1873.

Gibbs is named for the family of early settler Nicholas Gibbs. The community is also known as Harbison’s Crossroads. Gibbs was a German immigrant who ran away from home and worked his way on a ship to America. He eventually settled in what is now the Gibbs area and became prominent in early territorial and state politics. The Revolutionary War soldier was granted 100 acres and is buried in the old family cemetery on Emory Road. The house he built still stands today.

Mascot was named for the Mining and Smelting Company of Tennessee. Prior to that the community was known as Meek, for a family that settled there. Local legend says the name came from a local woman who lost her cat named Mascot.

Shipetown, near Mascot, was named for the Shipe family.

Pedigo is probably named for the family of John Lee Pedigo, a Knox County settler.

Hardin Valley is named for Col. Joseph Hardin, a Revolutionary War hero, and his son Joseph.

Carter may get its name from the family of David L. or William Carter who settled as early as 1795.

Concord’s name can be disputed but most believe the name comes from the Concord Cumberland Presbyterian Church there. The name “Concord” appears as part of the name of many churches and comes from “The Book of Concord or Concordia” that establishes the right of a church independent of Roman authority. At one time Concord was the second largest city in Knox County; the decline of the marble industry and the later flooding of the Tennessee River to form Lake Loudon led to the decline of the town. Today only a small portion of the original Concord exists.

Heiskell, also known as Heiskell Station, is named for the Heiskell family who were active in politics prior to and after the Civil War.

Luttrell was named for the Col. James Luttrell family that settled there after the Revolutionary War.

Seymour was named for the family of W. A. Seymour, a city designer.

Vestal is so-called because of the three Vestal brothers who operated a lumber and manufacturing company there.

Asbury is named for pioneer Methodist minister Francis Asbury, who rode his horse throughout the region organizing churches.

Lonsdale gets its name in an odd way. What is now Lonsdale was part of a large farm owned by William Ragsdale. It’s located at the base of Sharps Ridge and when Ragsdale saw the housing boom in Mechanicsville he found investors and formed a land company. The neighborhood’s name  is a combination of his mother’s family name, Lonas, and the last part of William’s family name, hence Lonas-dale or Lonsdale.

Norwood might have one of two origins: Certainly there were lots of members of the Norwood family in Knoxville, but there is also a story that one man, George Hunter, suggested the name. He was a former Ohio resident who suggested “Norwood” for the large Cincinnati neighborhood of that name. Hunter helped found a civil club that met here and there and eventually bought some property on Merchants Road and built the Norwood Civil Club.

Dante is located between Central and Dry Gap Road and was the home of part of the Sterchi Family. Dante is Italian for “enduring” but just how the name came to apply to that community is in question. A school, Dante-Dale is listed there from 1938 until 1964 and is also known as Dante Elementary. Today the term applies to the road that passes through the community.

There are some Knox County communities and Knoxville neighborhoods that defy anyone searching a reason for their names. You can assume that Midway, near the Knox-Sevier County line and now on the route to Seven Islands State Birding Park, is so named because it is sort of mid-way between Knoxville and Sevierville.

But there are other areas and if you know the reason for the names please let me hear from you: Deane Hill, Ritta, Solway, Tipton Station, Trentville,and Topside.

I’ll welcome any answers and reply to you: steely@knoxfocus.com.