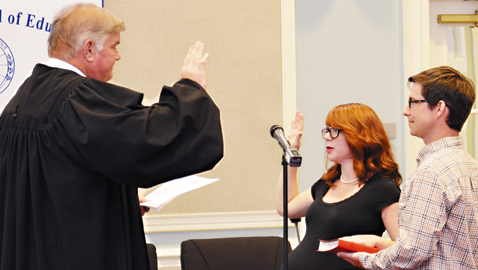 The Knox County School Board of Education had two back to back meetings last week, with the Sept. 2 Work Session meeting followed by the Sept. 3 Regular monthly meeting.

Two new board members and two returning board members were sworn in by Juvenile Court Judge Tim Irwin in a ceremony immediately before the Work Session meeting.

Interim District 2 member John Fugate was appointed by the County Commission on August 25, and will serve until the results of the November election are certified.

Board member-elect Patti Bounds was out of the country on a long-planned trip, and will be sworn in before the next work session on September 29.

Another new face at the BOE meetings last week was Bud Armstrong, County Law Director. David Sanders will continue working with the school system, but Bud will be attending meetings to provide more immediate answers to procedural questions that arise.

In his Superintendent’s Report, Dr. McIntyre said the ACT results were in, and Knox County overall showed an improvement from an average composite score of 20.2 in 2013 to an average of 20.4 in 2014. This is above the state average of 19.1.

Several items on the agenda received robust discussion last Tuesday, including an amendment to Board Policy EBH “Community Use of School Facilities,” the collection of Trustee’s fees, and the settlement of mixed drink tax revenues as proposed by the Town of Farragut.

A local organization sued KCS for “nominal damages” – approximately $900 for the cost of rescheduling the events as well as compensation for legal fees – after the district cancelled their after-hours reservation at Farragut High School due to concerns about the content of the meeting.

Law director Bud Armstrong advised the school board to amend Policy EBH regarding use of public facilities by community groups because the current policy was “constitutionally suspect.” The board voted to adopt the resolution, which includes the following amendment:

The Board also approved a motion for the Law Director to proceed with settlement of the lawsuit.

Armstrong said that his is an “advisory opinion,” and the BOE can take whatever action on that advisory they want, but if they sue, the odds of winning are “slim to zero to none.” Even Carson acknowledges such action would incur “tremendous legal costs.”

The Board voted to accept a settlement on delinquent mixed drink taxes by the Town of Farragut. The offer is $1.1M to be paid in installments over three years. The BOE originally asked for $1.3M and considered asking for interest as well. Dr. McIntyre pointed out that Farragut has since remitted the mixed drink taxes on schedule.

There was robust debate at the Work Meeting about the August vote on the 2020 Strategic Plan. Armstrong said that because the Board violated its own policy in declaring an “emergency,” the plan approved during the August 6 meeting is void.

Carson asked if the BOE can ignore the legal opinion. Armstrong said yes, but added, “Your own procedure nullifies the vote. That is not the opinion of the law director.” Armstrong added that the version of the plan approved at the July 2 meeting stands.

At Wednesday’s meeting, Mike McMillan asked if the BOE can take up the BOE approved plan at any point and amend it. Armstrong said, “If the procedures are followed, it is up to this Board how you want to implement and enact your plans and processes.”

McMillan asked Carson, “If you’re not going accept the law director, who are you going to accept?”

Carson replied, “I respect the Law Director… but this Board is under no obligation to accept the opinion of any legal director…. I was not put here by my constituents to sit here and say this is the King or the Pope or whatever you call it.”

Armstrong clarified that he was not voiding anything, he was only giving his opinion based on board policy, and the BOE is at privilege to accept or reject that opinion.

BOE member Doug Harris said he was in favor of keeping the August plan despite the procedural errors in the vote to approve it, saying “We implemented a lot of the changes that the teachers requested.”

McMillan wants to take up the plan again next month or the following month. Ms. Deathridge said “I understand, but I don’t want to keep going over this every month. I want us to make a decision, implement the plan, and move on.”

Harris made a suggestion to make this a workshop item in November, after the election, and vote on any recommendations at the following month’s meeting. He asked that it be put on the November workshop agenda.

The Board took no further action on the August vote, therefore the August version of the 2020 Strategic Plan stands, subject to revision and modification by newly elected BOE members in November.