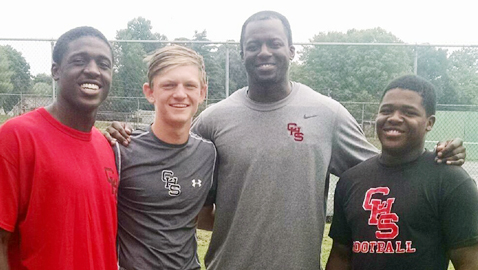 For most folks, turning 30 years old doesn’t make for the happiest of birthdays. But that wasn’t true for Bryson Rosser. That was the day he was offered the Central High football job.

To hear him talk now, that made it one of his happiest birthdays.

“I’m in my dream job,” said Rosser last Thursday afternoon. “I’ve been waiting for this opportunity. It gets my best shot every morning.”

The Bobcats seem to be happy he’s here, too, and appear to be running ahead of schedule under their new coach, whose first official day on the job was April 1.

Rosser actually made four trips to Knoxville from his home in Hackensack, N.J., prior to that to get a head start on his new program.

“When you get a dream job, you got to do what you got to do,” Rosser said of making those long trips from New Jersey to get the ball rolling and to get to know the school, the community and all those connected to Central High football.

The tradition-rich Bobcats ended a six-year playoff drought in 2012 but sputtered down the stretch last season and finished 4-6 overall and 4-4 in District 3-AAA, missing out on the playoffs again.

Rosser, a former Tennessee State University quarterback and offensive coordinator on Nashville Hillsboro’s Class 4A state championship team in 2008, inherits some key returning starters and Central should be good enough to be in playoff contention in a district that looks like it will be very competitive from top to bottom.

With a new coach comes new ideas and new schemes and that’s certainly the case at Central.

Returning quarterback Austin Kirby talked about what Coach Rosser had changed on the offensive side of the ball.

“He’s taken what we have and is using the best of our abilities. Last year, we tried to do way too much. He’s simplified it.”

Kirby, a junior, said the new plan includes a power running game “and getting the ball to our athletes and letting them do what they do.”

Veteran free safety Cedric Washington, an all-stater as a sophomore, said the defense has “changed to a 3-5 stack to put more in the box, because we’re focusing on stopping the run first. Then we can get to our strength – defending the pass game.”

Jeremiah Howard, one of the area’s most exciting running backs last season as a sophomore before a lower back injury sidelined him the last two games, shed light on a new motto at Central. “We play as a family. ‘Forget about me. I love you.’ We’re following that pretty well.”

Other probable starters on offense include sophomore running back Jadarius Sackie and a trio of junior receivers in Matt Randolph, Lyndon Wilson and Riley Gaul.

“Sackie runs the ball really hard and protects the quarterback really well,” said Rosser. “He’s not a big guy (5-6, 170). He runs with attitude. Everything he does is with attitude and great force. He’s one of our strongest guys and we expect him to keep growing and keep getting better.”

Alex Norris is the noseman in that 3-man front. He’s a 5-10, 260-pound junior. Other top defensive linemen are Davies and Thomas.

Joining Washington in the secondary will be junior cornerbacks DeMilton Rocker, Kelton Jones and Tristan Pressley.

Rosser is looking for aggressiveness on defense.

“We want those guys flying around, really playing as a unit and everybody hold up their part.”

Central’s place-kicker is Eli Holbert. He and Gaul are punters.

The Bobcats will open the season on the road at Jefferson County on August 29.