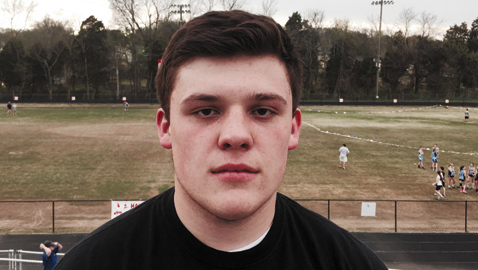 Jonathan Roth’s first year in the shot put event could be a golden one.

The Fulton High senior, who helped lead the Falcons to a state championship in football last fall, has the top mark in the state in Division I Class A-AA, according to Tennessee Runner’s state rankings for high school outdoor track and field as of April 9.

“This is actually his first year ever throwing the shot put,” said Fulton coach Justin Long last week. “Hopefully, he’ll make it to Murfreesboro and be able to compete at the state. That would be awesome.”

The Falcons could end up with two in the state in the shot put. D.J. Campbell, also a standout in football, missed qualifying by “an inch or half-inch” at last season’s region meet, said Long. “Hopefully, he can make it this year.”

The competition between Roth and Campbell is good for both.

“They are battling it out pretty good in practice,” said Long. “If they continue to work on their technique, I think they can be good.

“They compete a lot and I appreciate that, because we’re just trying to get them better every day, so hopefully they can continue to grow.”

Campbell saw action as a running back and linebacker and also handled kickoff duties. He’ll be continuing his football career at Georgia Military College, where he will reunite with former Falcon offensive lineman Akeem Cooperwood, said Long.

Catholic has two individuals and a relay team ranked No. 1 in the state in D-I, A-AA.

Field event standouts include Farragut’s Weldon Wright, who has leaped 21 feet, ¼ inch in the long jump and 44-3 in the triple jump. Bearden’s Joshua Sobota has a 48-10½ mark in the shot put. Lucas Campbell of Christian Academy has cleared 6-2 in the high jump.