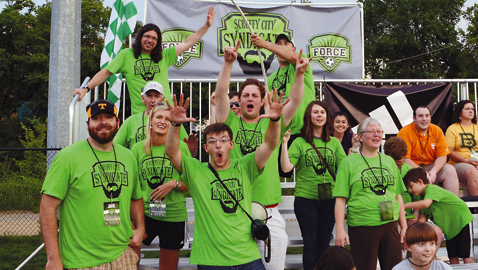 The Knoxville Force and Lady Force soccer teams recently opened their 2015 seasons at a new home with a new fan club — The Scruffy City Syndicate.

Now that the teams have a new home, they have some die-hard fans.

“This is our first year and I’m the leader of the Scruffy City Syndicate,” said Ben Winder, who works as a youth minister at Knoxville’s First Baptist Church. “I love to follow Knoxville’s local sports teams.

“I go to the Smokies games and I watch the Ice Bears but I especially love soccer and the Knoxville Force. Soccer is my favorite sport.”

Members of the Scruffy City Syndicate are die-hard soccer fanatics, though the game is relatively new to most, including Derek Green, who is a lawyer from Athens, Tennessee.

Green, who is an avid University of Kentucky sports fan, may be new to the sport, but he’s wasted little time finding his niche at Force matches.

“I saw my first soccer game [when both teams opened their respective 2015 home campaigns on May, 23].  “Ben’s brother is a partner at my law firm and I’m here to support the Force,” Green said. “I’m a big sports fan. My family is from Kentucky, so I’m a Wildcat but I love the [Nashville] Predators and the Titans.

“I grew up a Redskins fan but I became a Titans fan when they moved to Tennessee. I’m a big Predators fan and I love to go see them play whenever I can and the Ice Bears put a good product on the ice.”

Members of the Scruffy City Syndicate add to the soccer atmosphere with cheers and songs throughout Knoxville Force matches.

“We’ll sing all night,” said Winder, who graduated from Baylor University in Waco, Texas. “I’m a Bear but my roots are in East Tennessee, so I am a UT fan. I’m a mountain biker and I grew up in McMinn County.”

Winder’s true passion is soccer and he immediately forged a friendship and partnership when the Emerald Youth Foundation purchased the Force and Lady Force and gave the squads a new home.

“This is a new era for the Knoxville Force with the Emerald Youth Foundation buying the team after last season and we have a great relationship with them.

“We’re always looking for new members and if you join the Scruffy City Syndicate, it’s $40. That’s the price of a season ticket. You get a season ticket, a t-shirt and a soccer scarf.”

“We’ll attend some of the ladies’ games,” Winder said. “We came to their first game because it was part of a double header.”

“We’ll tailgate before all of the men’s games.”

The Lady Force, who compete in the Women’s Premier League, notched a 3-0 win over FC Nashville Wolves on May 23. They hosted a pair of matches over the weekend but results were not available at press time.

The Lady Force will entertain Charlotte Tuesday at 7 p.m.

Meanwhile, the Force dropped a 2-1 decision to New Orleans at home Thursday night.

Knoxville, which plays in the National Premier Soccer League, is 0-2-1 this season. The Force will return home to face Nashville FC on June 9.