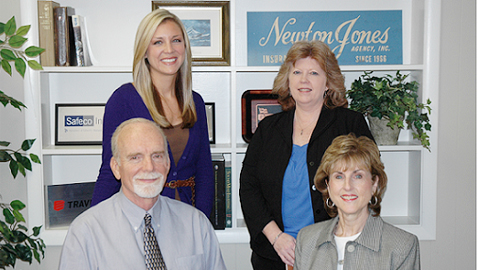 On the wall of the family-owned business is a plaque for independent insurance agencies that pledges personalized service. Since 1966 the Newton Jones Agency at 6712 Kingston Pike has a history of just that – service.

Earlier this year the founder, Henry Newton Jones, passed away and his family continues the “tradition of service.”

Thursday morning, Jennifer Asbury was busy working with a client who lives several hours from Knoxville. The person’s insurance policy was about to expire and they wanted to renew. Jennifer, the daughter of the founder, was working back and forth with the insurance company trying to find a way for the payment to be received in time.

“We service our own policies, we don’t just turn around and pass them over to an 800 number,” she explained.

“Relationships are really important to us,” Danny said.

The Newton Jones Agency began in Bearden on Forest Court and in the 1970s moved to their current Kingston Pike location.

“Since we represent more than one insurance company we’re not captive to one rate or coverage.  You can stay with us and we’ll work to find a company and policy that’s right for you,” Danny said.

The legacy of the Newton Jones Agency has served several generations of clients: grandparents, their children and their children’s children.

“We no longer write business or commercial insurance,” Danny said.

“And that allows us to give more attention to each individual and their needs,” added Rachael.

The Newton Jones Agency also has a Facebook page, hosted by Rachael, who adds another generation to the company and Jennifer said it puts them in touch with younger people needing insurance.  You can find them at www.newtonjonesagency.com. The telephone number is 588-3558.