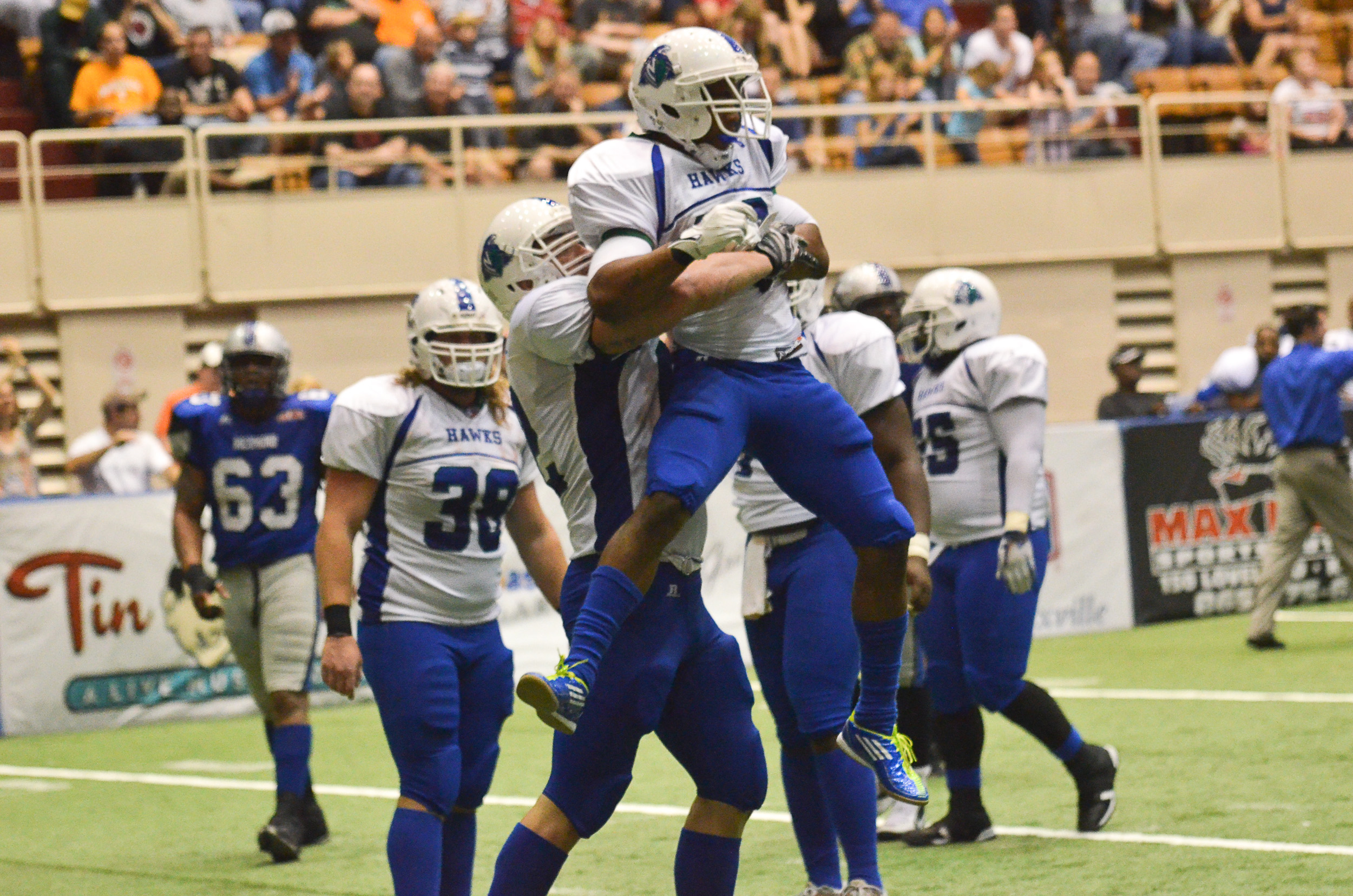 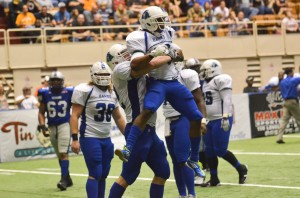 Photo by Adam Sullivan. Kelvin Thompson celebrates a third-quarter touchdown as the the Nighthawks attempt to rally from a deficit.

College basketball has crowned its champion. Baseball is in full swing, and the Knoxville Ice Bears are skating around in the playoffs. So what’s the football fanatic to do besides watch UT spring practice and the upcoming NFL draft? How about some live, hard hitting action ‘indoors’ on the pro level right here in Knoxville. Yes, that’s correct. Indoors!

Arena league football is back in Knoxville just in time to satisfy the hunger of the game for the football faithful.

The Knoxville Nighthawks, who are a member of the Professional Indoor Football League (PIFL), will battle with teams from the south region that boast talent once seen on the college gridiron nationwide. Currently, the PIFL consist of the Columbus Lions, Alabama Hammers, Richmond Raiders, Albany Panthers and the Louisiana Swashbucklers. Former players from Ohio State, Vanderbilt, Southern Mississippi, Tennessee, Carson-Newman and Tusculum are all represented in the Nighthawk royal blue, green, and silver uniforms that are donned at the Coliseum on Saturday nights. With the season well under way and a disappointing 0-3 start for Knoxville, hopes are still high for this upstart venue that is sure to entertain all the way to the closing horn.  Head coach Chris MacKeown, who has been on the arena league circuit with the AFL, and the af2 leagues, certainly knows what it takes to build upstart teams. Leading teams like the Colorado Crush, Amarillo Dusters, Austin Wranglers, Columbus Destroyers, Louisville Fire, Cincinnati Swarm, well you get the point, to play-off action has been a common theme for the forty-two year old Dayton, OH native.

“I just love a challenge. I have been with so many start-up teams, it’s hard to remember,” said the mentor. “Arena football is a game set to entertain, but winning is entertaining as well. That’s what we plan to do here.” MacKeown’s job is made easier by his staff of well proven assistant coaches that consists of former Alabama Crimson Tide National Champion Tommy Johnson (92’), line coach Greg Cotton, and Arena League veteran special teams coach Steve Smith.

Former Vol kicker Alex Walls can be seen booting kick-offs through the uprights from the opposite end zone during these contest on any given Saturday. Walls, a current associate at Home Federal Bank, likes the transition to the indoor game. “I enjoy these games. It gives me more opportunities to kick. The indoor climate never changes, and conditions are perfect,” Walls continued. “We just need to learn to quit shooting ourselves in the foot. We are young, but it can all be fixed.’

Former Carson-Newman lineman Shane Canterbury anchors the offensive line at a towering 6’ 7” 320 pounds. The former WWE strongman is optimistic about his squad. “We are not going to give up. These three games we’ve had are stepping stones for us. We need to focus on fixing these mental mistakes that keep bothering us. It’s great to see all these kids out here,” Canterbury told The Focus.

The kids Canterbury were speaking of were hold-overs from the days youth football league action that the Nighthawks have up-started as well. Nighthawk Account Executive, Dan Milas told The Focus that the new youth league is something that they hope will grow as the sports makes its mark in the Knoxville market. “We have about 160 youths involved in a league we have set up. It’s going to be an exciting thing for their kids as they actually play on our field, with the same rules implemented. It’s just a neat way of introducing the arena game to today’s youth. They really enjoy it. Seeing those kids out there bumping each other and running into walls as well is something to see. Parents just love the interaction and the excitement on their children’s faces,” Milas said.

Media and Public Relations director Jordan Halverson told The Focus that the personal aspects of the game can be expected at each contest. “This facility we play in offers a personal atmosphere. It truly is ‘up close and personal’ with the fan. So personal in fact, we’ve had a couple of players end up in a couple people’s lap,” Halverson continued. “There is no bad seat in this facility. Fan interaction is constantly at a high level. If a ball goes into the stands, they go home with it. How cool is that?”

All games can be heard on Tennessee Sports Radio 1180 AM during the season.

Coach MacKeown will have some time this week to regroup with his squad as the team will face a bye week in the schedule. “I think some time to rest and heal will do this team some good,” MacKeown explained.

The Nighthawks will entertain the Albany Panthers Saturday, April 14. Kickoff is set for 7:00 p.m.