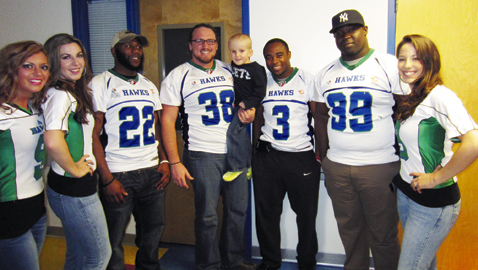 Members of the Knoxville Nighthawks and the Lady Hawks dance team made a recent visit to East Tennessee Children’s Hospital. Knoxville played its home opener Saturday.

The Knoxville Nighthawks, East Tennessee’s arena football team, recently announced their You are the Ace program. Through the program, the Nighthawks, who recently began their second season as a Professional Indoor Football League expansion teams, will reward students for academic excellence and good citizenship in the classroom.

Local students will be awarded with a free voucher that will entitle them to a ticket to a Knoxville home football game.

“This was a program started by our CEO, Jeff Knight and I don’t know all the particulars but I know that we distributed 1,000 vouchers to the Knox County school system’s central office,” Nighthawks general manager Andy Haskell said. “The county is going to use them as a reward system for its students.

Knoxville, which played its first three games on the road, has wasted little time getting involved in the community. Four Nighthawks players and three cheerleaders recently visited East Tennessee Children’s hospital and signed autographs for patients.

The Nighthawks (0-3 at press time) played their first of six regular season home games Saturday night. Knoxville, which plays its home games at Knoxville Civic Coliseum, hosts the Albany Panthers on April 5 at 7:30 p.m. The Nighthawks have home games on May 4 against the Louisiana Swashbucklers and May 11 against the Lehigh Valley Steelhawks. Kickoff for both games is scheduled for 7 p.m.

The Nighthawks have a home game on June 7 against Louisiana at 7:30 before closing the season with a home date against the Alabama Hammers on June 15 at 7 p.m.

The PIFL has franchises in Georgia, Alabama, Tennessee, Virginia, Louisiana, and Pennsylvania.

The league’s seven teams include; the Nighthawks, the Panthers, the Richmond Raiders, the Columbus Lions, the Steelheads, the Swashbucklers and the Hammers, who are also owned by Knight.