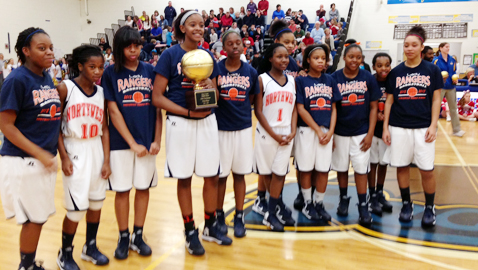 Young proved prophetic as the Lady Rangers had to fight to win a 23-18 defensive struggle over West Valley on Saturday, Feb. 9 at Karns Middle School’s Thomas L. Duff Memorial Gymnasium.

With the victory, the Lady Rangers (16-3 overall) culminated a perfect KCMSBC season but the jewel of the crown didn’t come easily for Northwest, which defeated the Lady Wolves by 29 points in the regular season.

“I’m very proud of my girls but I told them that this thing wouldn’t be easy,” Young said. “I knew that he [Lady Wolves coach Alex Comer] would have them prepared.

West Valley (17-4) was ready to play as it reached the championship game for the third consecutive season. The Lady Wolves won the title in 2011 and lost in the finals to South Doyle last year.

West Valley had a young team this season and Comer was a bit disappointed with the second straight runner-up finish.

“We were competitive and we had a chance to win late in the game and that’s all you can ask for,” Comer said. “Our game plan was good. We started two sixth graders and a seventh grader in the championship game.

“I told the girls after the game that I didn’t want one game to define our season after we’d spent three or four months together. It hurts getting there and losing for a second straight time.”

From the opening tip, it was apparent that offense was going to come at a premium in the game between top-seeded Northwest and the second-ranked Lady Wolves. The contest was scoreless before West Valley’s Tytiaira Spikes hit a free throw with 2 minutes, 22 seconds remaining in the first quarter.

Northwest battled back to open a 6-5 lead by the end of the frame. KeAndra McKinney scored four points in the quarter for the Lady Rangers to help them open the narrow advantage.

“KeAndra McKinney is the best player in the league,” Comer said.

The Lady Wolves hung tough as the two teams were locked in a 9-9 tie at halftime. The Lady Rangers, however, did just enough to take a 15-11 lead by the end of the third quarter.

West Valley pulled to within 15-13 when Trinity Lee made a shot. The Lady Rangers answered when McKinney hit the next two shots to make it 19-13 with 4:11 left. She finished the game with 11 points to lead all scorers.

From there, both squads stepped up their defense before Spikes made it 19-15 on a basket with 2:47 remaining. Tournament Most Valuable Player JaQuisha Hines gave the Lady Rangers a 21-15 lead with a bucket at the 2:30 mark. Deayshia Johnson made it 23-15 a short time later.

The Lady Wolves, who were sparked by Lee’s seven points, scored the game’s final three points. But it was too little, too late for West Valley.

In the third place game: Celine Hughes scored 13 points to lead the Halls Lady Demons to a 24-11 victory over third-seeded Farragut.

Halls, the tourney’s fifth seed led 9-7 at halftime before using an 11-1 third quarter run to open a 20-8 advantage and put the game away.

“This was a hard-working team and this is the best team that I’ve had at Halls,” Lady Demons coach Tom Poisal said. “We took Northwest to overtime [in the semifinals] and held the best player in the league [McKinney] to three points in regulation.”

Kate McMurry scored six points, on a pair of 3-pointers, for the Lady Admirals.