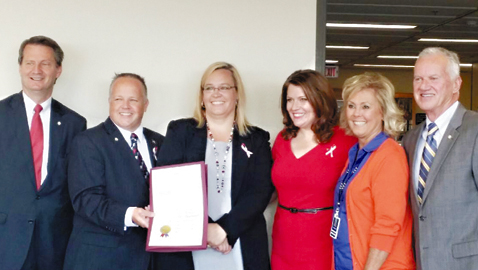 The National Center for Learning Disabilities explains that Dyslexia is a language processing disorder that can hinder reading, writing, spelling and sometimes even speaking.

How many of us have inadvertently “reversed” the letters in a word while reading, and laughed it off saying “I had a dyslexia moment?”

But for approximately 1 in 5 students, dyslexia is no laughing matter. Research has shown that 20% of American elementary school children have significant, continuing difficulties with learning to read, reading fluency and/or reading comprehension.

Statistically, that means approximately 5,500 of the 27,517 elementary school students in Knox County may have some form of dyslexia. Most are not identified.  But according to Learning Ally (learningally.org), the most prominent sign of dyslexia is difficulty in learning to read.

Dyslexia arises from difficulties or inefficiencies in the brain in analyzing and processing individual letter sounds (called phonemes), despite average to above average intelligence.

Dyslexics have problems blending phonemes into words at a speed that allows comprehension and fluency.

People with dyslexia may have other language-related deficits such as understanding rapid speech, difficulty in following complex instructions or trouble remembering things in correct sequence.

Under the Federal Individuals with Disabilities Education Act (IDEA) law, states are required to recognize dyslexia. But many schools in Tennessee tend to label children with dyslexia under the broad umbrella of “specific learning disability” (SLD) instead of identifying the disability as dyslexia.

“A disorder in one or more of the basic psychological processes involved in understanding or in using language, spoken or written, which disorder may manifest itself in the imperfect ability to listen, think, speak, read, write, spell, or do mathematical calculations… Such term includes such conditions as perceptual disabilities, brain injury, minimal brain dysfunction, dyslexia, and developmental aphasia.

But, the reading interventions that help a child with dyslexia are as specific as the label itself.

Sally Shaywitz, M.D., is the Co-Director at the Yale Center for Dyslexia and Creativity. She testified at a U.S. House of Representatives Committee on Science, Space, and Technology hearing last month on “The Science of Dyslexia.”

According to Shaywitz, “learning disabilities are comparable to what in medicine are referred to as ‘infectious’ diseases, while dyslexia is akin to being diagnosed with a strep throat – a highly specific disorder in which the causative agent and evidence-based treatment are both known and validated.”

She said, “It is imperative that teachers and parents learn about the powerful science of dyslexia, know how to identify dyslexia early on and to provide evidence-based methods to teach dyslexic children to read. We must not give up on teaching reading and limit a child’s future options. Education must, and can be, aligned with science.”

Both Johnson and Nagel have children with dyslexia, and have struggled to find the resources for their children. Tennessee schools do not specifically test for dyslexia, but they will do an evaluation to see if a child qualifies for services.

The trouble is that many children with dyslexia will not qualify for services or accommodations. The small percentages who do qualify are often not placed in a program that has been researched based specifically for dyslexia.

When asked about programs in Knox County schools, Johnson said, “Actually, KCS has a few programs in place now that are pretty good for elementary, but I would like to see them add more middle and high school programs.”

She adds, “This is just not about reversals! Does your child struggle with recognizing the letters of the alphabet?  Spelling? Left vs right? Tying shoes? Slow reader compared to same age peers?

“Those are the weaknesses, but also look for the strengths. Most children with dyslexia have large vocabularies, above-average creativity, and excellent engineering skills. For example, many can build Lego sets meant for children twice their age without ever looking at the directions.”

Johnson concludes, “We must identify these kids earlier. My child was not diagnosed until he was almost 8 years old. Dr Shaywitz says early intervention is key, and dyslexia can be identified at age 5.”

This week, Wednesday October 15 is recognized as National Dyslexia Awareness Day. The October 15 date was chosen to signify that 1 out of every 5 children has some form of dyslexia.

Although the official dyslexia color is silver, red was chosen for this day as part of the “redeem red” campaign. Too often, dyslexic relate the color red to the multiple corrections on their papers and tests. And, as Johnson says, “Children are the silver lining in sea of red ink.”

You are encouraged to wear red on October 15 to help spread awareness of dyslexia. If you would like more information, the Learning Ally website (learningally.org) has several useful tool, including an online dyslexia screener and free parent support specialists (they are not advocates, they just point parents to resources)

If you have questions or wish to get involved locally, contact Jennifer Nagel at jranagel@comcast.net.