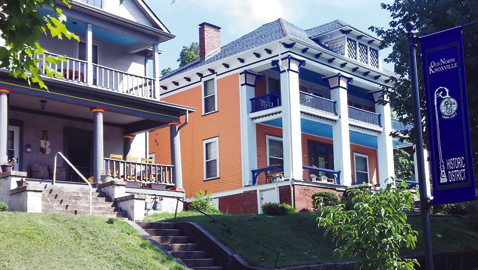 Photo by Mike Steely
Homes in Old North Knoxville area are of various styles. Since the neighborhood is within a Historic Overlay District, improvements or changes to the exterior must go before the Historic Zoning Commission.

Old North Knoxville sits in a Historic District. Here and there are a few homes for sale along the sidewalks and tree-lined streets. The houses vary in style; some are single story and some are large two-story homes, most dating from 1880 through 1920. The neighborhood was a city unto itself by 1889 and became part of Knoxville in 1897. It was, in those years, a streetcar suburb of downtown Knoxville.

Driving through the Old North Knoxville neighborhood you can see and hear the changes there. Workers are busy with the historic homes there, repairing, replacing, painting, etc. The area is alive with activity as longtime residents and newcomers fix up the fine houses there.

When homeowners want to improve the exterior of their homes there they apply to the Historic Planning Commission and appear before that group with their plans and ideas. That applies to all of Knoxville’s Historic Neighborhoods such as Old City, Fourth and Gill, Emory Place, Island Home, Sequoyah Hills, etc.

This past Thursday, three Old North Knoxville home projects came up before the Knoxville Historic Planning Commission, which reviews and votes on changes to the exteriors of the houses in the city. All three requests were approved with some changes and requirements to the renovations.

City Councilman Marshall Stair, who moved from downtown to Old North Knoxville, is restoring and renovating his home at 1325 Armstrong Avenue and wants to build a garage. Stair said the garage would go on an existing concrete slab behind the house where he said the “servant quarters” used to exist. It would be along an alley there which he says is narrow and rarely used.

Knoxville’s Historic Planner Kaye Graybeal told the other Historic Zoning Commission members that the staff recommended carriage-style doors on the garage. Pierce said the Old North organization has “no objections” to the garage which he said “fits the style” of the house.

Stair agreed to construct the siding with wood and will submit the plans to Graybeal. He also said he understands he must ask the Board of Zoning Appeals to get a smaller setback from the alley for the structure.

The owner of 1208 Kenyon Street asked the historic commissioners for permission to demolish a carport, construct a new one and restore the front porch. The staff and members approved the idea with some restrictions, including reusing some of the bricks on the site.

Speaking for the neighborhood group,  Pierce gave the proposal a “Big Yea!” and the commissioners said they were glad to see the home come back from disrepair and, informally, asked the new owner to remove the satellite dish at the home. The structure is a 1910 Craftsman Bungalow.

Replacing some windows and rebuilding a chimney at 424 E. Oklahoma Avenue in the Old North neighborhood was also discussed. Meg Lane was asking for permission and it was stated that some of the windows are rotten. Graybeal told the applicant to submit window specifications to her before buying the replacements.

The Old North Knoxville organization can be found on the internet at “oldnorthknoxville.org” or on Facebook, Yahoo, or Twitter. A potluck dinner is held at 7:30 p.m. on the second Monday of each month at the St. James Episcopal Church at 1101 N. Broadway.