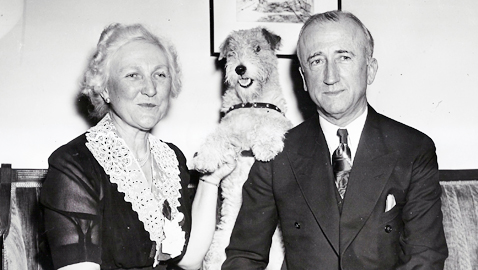 From the author’s personal collection.
Maude and Jimmie Byrnes with their beloved dog

James F. Byrnes had resigned from the Supreme Court of the United States to accept the responsibility for running much of America’s war effort at the personal request of President Franklin Delano Roosevelt.  Byrnes had given up a lifetime appointment, but being a wily politician, he realized the opportunity for further advancement.  As the 1944 Democratic National Convention approached, Byrnes believed he had the backing of President Roosevelt to seek the vice presidential nomination to replace incumbent Henry A. Wallace.

Wallace desperately wished to be renominated and Roosevelt, rather than telling the vice president the truth, nudged him to run again.  FDR had in fact encouraged any number of influential and ambitious Democrats to seek the vice presidential nomination.

Jimmie Byrnes’s innate sense of timing and politics failed him on one occasion where he allowed his own ambition to get ahead of his usually impeccable common sense.  There was little real chance for Byrnes to be nominated for vice president as he had several glaring weaknesses as a national candidate.  Byrnes was objectionable to organized labor and many of the big city bosses worried that the South Carolinian having left the Catholic church would be highly offensive to the hundreds of thousands of Catholics who comprised much of the Democratic voting base in large cities across the country.  African-Americans were opposed to a Byrnes candidacy as the former senator had been a white supremacist, although by Southern standards Jimmie Byrnes was something of a racial moderate, never having been a vulgar racist like so many of his colleagues.

Byrnes, sensitive to any political development, heard rumors that Missouri Senator Harry S. Truman might be a candidate for the vice presidential nomination.  Byrnes sought to commit Truman to his own candidacy by asking the little man from Missouri to place his name into nomination.  Truman readily agreed and was one of the few Democrats in the country who didn’t want the nomination.

Yet the most important Democrat of them all, Franklin Delano Roosevelt, was still weaving a web of deception as he encouraged the various candidacies of those who truly believed they had the president’s firm commitment of support.  Roosevelt gave Vice President Henry A. Wallace a carefully worded statement that said were he, Roosevelt, a delegate to the Democratic National Convention, he would vote for Wallace.  Roosevelt also gave the Chairman of the Democratic National Committee, Robert Hannegan of Missouri and a Truman supporter, a letter saying he would be delighted to run with either Senator Harry Truman or Supreme Court Justice William O. Douglas.

Once it became clear to a very surprised Jimmie Byrnes that he was not in fact Franklin Roosevelt’s choice to serve as vice president, he withdrew and returned to South Carolina.  President Roosevelt, perhaps in part to assuage any hurt feelings Byrnes might have, took the former senator with him to the Yalta Conference where the president met with British Prime Minister Clement Atlee and Soviet dictator Josef Stalin.

Within months of having been reelected to a fourth term, FDR was dead.  It was James F. Byrnes who informed President Harry S. Truman about the Manhattan project and the development of the atomic bomb.  Truman highly esteemed Byrnes and few were surprised when the president appointed the South Carolinian as Secretary of State in July of 1945.

Byrnes immediately took a hard line with the Soviet Union and increasingly rarely consulted with the President on foreign policy matters, an inauspicious beginning for any Secretary of State who serves at the pleasure of the president.

Despite the longstanding friendship between Harry S. Truman and James F. Byrnes, it was increasingly difficult for the two men to work closely together.  Truman fretted that Byrnes was setting American foreign policy himself, without regard for Truman’s own feelings.   President Truman also believed that Byrnes deeply resented not having been Franklin Roosevelt’s choice for vice president in 1944, which would have made him President of the United States when FDR died.

Truman was likely right about Byrnes believing he was superior in both ability and intellect to the president.  Relations between the two continued to deteriorate and although Byrnes was named by TIME magazine as its “Man of the Year” in 1946, he resigned as Secretary of State in 1947.

Byrnes set out to give his own version of events through what became a best selling memoir, Speaking Frankly.  Byrnes, already wealthy, used the royalties from his book to finance a foundation that would provide scholarships for orphaned children.  The Byrnes Foundation would become increasingly important to Jimmie Byrnes as he entered his twilight years.

At least one person was not entirely happy with Byrnes’s book; Harry Truman snapped that he knew how Caesar felt after reading the memoir.  Byrnes retorted that Truman was no Caesar and he was no Brutus.

Once again, Jimmie Byrnes had not completely abandoned elective politics.  With Strom Thurmond barred by South Carolina law from seeking a second term, Jimmie Byrnes was eyeing a gubernatorial bid.  Although he was sixty-eight years old in 1950, Byrnes entered the Democratic primary.  Byrnes faced little serious opposition and while he had three opponents in the primary, he won with quite nearly 80% of the vote.

Governor Byrnes tried hard to equalize educational opportunities for black students, dramatically increasing money for schools which served African-American children.  Byrnes also fought with the Ku Klux Klan again and the governor insisted the legislature pass a law which forbade anyone from wearing a mask in public save at Halloween.

Although still nominally a Democrat, Byrnes openly supported the presidential candidacy of Republican Dwight D. Eisenhower in 1952.  Byrnes also rejected the official nominee of the Democratic Party for the United States Senate from South Carolina in 1954.  Senator Burnet Maybank, a close friend and ally of Jimmie Byrnes, died in his sleep in 1954, necessitating a special election.  Due to the time frame for naming a nominee, the Democratic State Executive Committee hastily nominated long-time State Senator Edgar Brown.  While some believed Byrnes wanted the nomination himself despite being seventy-two years old, the governor quietly backed the candidacy of Strom Thurmond, who ran and won as a write-in candidate.

Byrnes left the governor’s office in 1955 and over time, it was Jimmie Byrnes who foresaw the South leaving the Democratic Party.  The former governor believed the national party was far more liberal than Southerners and would do little for the South, which had been staunchly Democratic in its voting since the Civil War.  Byrnes worked quietly and effectively, eventually becoming a Republican himself.  That same legacy exists today as South Carolina is a reliably Republican state.

Byrnes wrote yet another memoir, All In One Lifetime, which became a best seller and the royalties again went to finance the Byrnes Foundation to provide scholarships for orphaned children.  Byrnes and his wife Maude never had any children, but as they aged, they took a personal interest in the many youngsters who were the beneficiaries of their gift.  Neither objected to several of the young people referring to them as “Mom” and “Pop” Byrnes.

Like many childless people, both Maude and Jimmie Byrnes loved animals, dogs in particular.  They had a series of fox terriers they doted on and while living in Washington, maintained a very nice apartment in the elegant Shoreham Hotel.  Byrnes himself professed to be satisfied with a couple of tailored suits each year, as well as a supply of Hanky Bannister bourbon.

Byrnes remained an iconic figure in South Carolina during his lifetime and his advice was still sought by many aspiring politicians in his home state.  Not only those aspiring to office in South Carolina sought out Jimmie Byrnes; Richard Nixon consulted with Byrnes in his 1968 presidential bid.

James F. Byrnes continued to receive a steady stream of callers until the end of his life.  He and his wife devoted more time and energy to the youngsters who were the recipients of the scholarships provided by the Byrnes Foundation.  Despite all the honors and positions of power that James F. Byrnes held, he later said the Byrnes Foundation was the most rewarding thing he had ever done in his life.

Governor and Mrs. Byrnes took a real interest in each of the young men and women they were helping through college.  Frequently invited into their home, some recalled being entertained by the elderly couple who would sing “Let Me Call You Sweetheart.”  One young lady recalled holding up her camera to photograph Governor and Mrs. Byrnes when Jimmie Byrnes impishly said, “I’ll give you something to photograph!”  He then grabbed Mrs. Byrnes and gave her a big kiss.

Byrnes would write letters to the recipients of the scholarships, inviting them to contact him at any time with their problems, concluding with the simple, yet sincere statement, “I want you to make good.”

The former governor made it clear that financial support for the scholarship recipients was the least of what he hoped to accomplish.  Cards, letters, and telephone calls were answered promptly; students joined Governor and Mrs. Byrnes at luncheons and even weekend trips to South Carolina beaches.

After James F. Byrnes died on April 9, 1972, Maude Byrnes carried on the work with the foundation until her own death.  That legacy remains in place today.

A statue of James F. Byrnes stands on the statehouse grounds, oddly he is depicted in the robes of a Justice of the United States Supreme Court, an office he held for little over a year.  By any standard, James F. Byrnes lived an interesting and productive life.