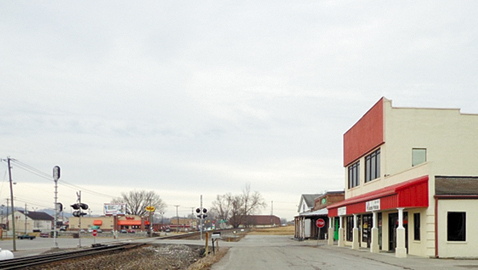 Photo by Mike Steely
Downtown Powell developed along the railroad and still has scenes like this one, reflecting how the unincorporated community looked many years ago. How the new Emory Road bypass will affect the community is not yet known.

Whether you call the road “Clinton Highway” or “U.S. Highway 25W,” the four-lane road between the I-75 and I-640 interchange and Emory Road was once the main route from Michigan to Florida. The heyday of the highway may have been in the years following World War II until the mid 1960s, when the interstate was completed.

Clinton Highway’s history goes back to the 1700s and the establishment of Menifee’s Station by John Menifee on a land grant from his service during the American Revolution.  As one of the area’s first settlers, Menifee gave two acres of land for the establishment of a community church. Many faiths held services there until they were able to establish their own buildings. Menifee’s fortified home was located near the current intersection of Clinton Highway and Emory Road.

Before I-75, Clinton Highway extended further south and flowed into Central Avenue. If you were headed north or south, Clinton Highway carried you through Knoxville. Today the busy highway touches the neighborhoods along the way. Norwood borders Inskip and Powell and Powell borders Halls Crossroads and Anderson County. Obviously Clinton Highway stretches northward to Clinton and passes through the heart of that town.

Clinton Highway has seen booms and busts and is now seeing growth as more businesses locate there to serve the growing population of Knox County’s northern neighborhoods and visitors who travel north and south along I-75. Recent new businesses include Cheddar’s Restaurant and a new Food City in Powell. One of the most popular businesses in Norwood is Knoxville Tours, which operates motor coaches throughout the nation from their office on Clinton Highway.

Until about 1930, the community of Norwood was called Tillerytown after the local family.  There are still streets in Knoxville named for the Tillery family. The McClain family was prominent there also and formed a large nursery which later became the Sunset Drive-In Theater. As Clinton Highway developed, so did Norwood. The highway section of the community once had a busy Cas Walker Store, a twin-screen drive-in theater, and businesses blossomed along the stretch of road. Today the neighborhoods of Norwood and Powell share fast food and family restaurants, new and used car dealerships, banks, supermarkets,  and the large Knoxville Expo Center.

Just how Norwood got its name is still in question. Certainly there were lots of members of the Norwood family there, but there is also a story that one man, George Hunter, suggested the name. He was a former Ohio resident who suggested “Norwood” for the large Cincinnati neighborhood of that name.

Hunter helped found a civil club that met here and there and eventually bought some property on Merchants Road and built the Norwood Civil Club.

“Norwood went from a farming community to a residential suburb in the 1950s,” Lynn Redmon, President of the Norwood Homeowner’s Association, told The Focus. “Lots of people, employees in Oak Ridge, The Coster Railroad Yards and TVA, many veterans of WWII, bought here and built homes.”

Norwood, which was annexed into Knoxville in 1963, also has a public library and a post office. Norwood shares the Norwood-Inskip Recreation Center at 301 Inskip Drive. The facility has a gym and several ball fields. The Norwood Library, Redmon says, started as a community center on land donated by the McClain family.

The Homeowner’s Association is quick to speak up when things threaten their neighborhood and Redmon says they have survived, even though they are constantly threatened with surrounding commercial zonings. “We have a lot of threats from within and without,” he said.

“One thing that has helped a lot is that Norwood is now zoned for our students to attend Powell High School,” he said, adding, “We also have an excellent program at Norwood School from the Greater Schools Partnership, where the students get extra hours of tutoring.”

Improved streets and roads have been the goal of Better Roads In North Knox (BRINK) and its president Clark Hamilton, who resides in Norwood. Since 1987 the group has been contacting the city, county, and state to get road improvements, make suggestions, and push not only for Norwood and Powell, but for other needed improvements in other places, like Norris Freeway and Emory Road from Maynardville Highway to Tazewell Pike in Halls.

“We wanted to get our tax money returned in the form of street and highways,” Hamilton told The Focus while explaining BRINK’s origins. “Everything  was going to West Tennessee.”

Hamilton said there are three projects that BRINK is working on currently: improving Emory Road in Halls to Tazewell Pike, improving Raccoon Valley Road from Norris Freeway to the Anderson County line, and extending Emory Road to Western Avenue.

“Western Avenue is still being worked and it needs to be through lanes through Karns,” he said, adding that the group goes to Nashville each year to meet with legislators about road matters.

While the Norwood neighborhood ends at Callahan Drive, both Powell and Norwood residents claim the Walmart and Target shopping centers there. The City of Knoxville extends to the top of the hill on Clinton Highway and ends just beyond the old Airplane Filling Station. It extends up I-75 to the Emory Road exit, taking in the old Powell Airport and the businesses at the exit.

The Powell community is unique in several ways and, aside from Fountain City in Knoxville, is one of the few communities in Knox County with an actual “downtown” area. Powell is not incorporated and is actually two years older than Knoxville, founded in 1789. Early settlers include Stokley Donaldson, brother-in-law to Andrew Jackson. He built a home that is now called the Alexander Bishop House and still stands there on Bishop Lane.

While some think Powell may have been named for Powell Valley far to the north or Ambrose Powell, a long hunter for whom the valley and the river were named, history says it was named “Powell Station” for the first railroad station there.

Being along the Emory Trace, the community grew into a trading center and, when the railroad came through, the little town grew. Downtown Powell has an obvious railroad heritage, with the tracks coming right through the town. Buildings on the north side of the railroad look like an 1880s village.

Powell is the home of Weigel Stores, with more than 50 gas and convenient stores in our region. The stores, which offer Weigel milk products and grocery items, were started 80 years ago by Lynn and William Weigel. The company’s corporate headquarters are located in Powell, next to the dairy farm.

A rerouting of Emory Road, currently underway and due to be completed this August, will bypass the historic downtown and the schools to exit on Clinton Highway. Locals have been complaining about traffic downtown, especially when the schools are opening and dismissing, but how the bypass will affect businesses along the downtown stretch is uncertain.

Members of the Powell Business and Professional Association shared their thoughts on the new bypass with The Focus. Kelley Jarnigan, past president, said that the destination businesses in Powell’s downtown probably won’t be hurt by the bypass but it could affect some of the retail stores that draw their customers for gas and such.

“We make it our purpose to patronize these businesses,” she said.

Thomas Hill, also an association member, spoke of the bypass and said “We won’t know until it’s completed” on how it will help or hurt business.

Sage Kohler, current president of the group, said that they are considering plans for fund raisers to beautify Emory Road through town to Western Avenue, but they have to wait until the new bypass is completed and the road is released by the state to the county before they can start.

Famous people connected with Powell include John Cooper, the ESPN commentator and College Hall of Fame member, and Archie Campbell, the TV comedian, who is buried in Glenwood Cemetery there. Archie’s wife passed away this past January. Powell is also the setting for the late John Agee’s “A Death in the Family” novel.