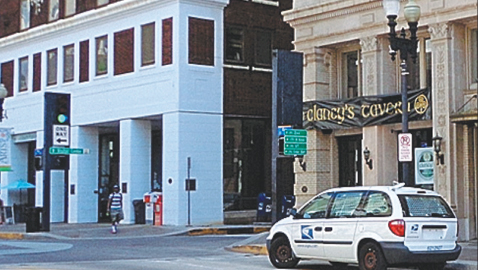 Each week the Focus looks at Our Neighborhoods and this week we focus on Downtown Knoxville. You might not think of downtown being a “neighborhood” but it certainly is, with more than 2,000 people living there now and more moving into the renovated buildings each month. Each neighborhood in Knox County has its own unique features and there’s none more historic, urban, and historic than Downtown Knoxville.

In recent years much effort has been placed on revitalizing the downtown. Nowadays, the effort is spearheaded by Mayor Madeline Rogero with the intent of bringing new business and residents into the heart of the city. She’s been working with the various city agencies, private investors and developers to restore some of the historic buildings. The loss of the McClung warehouse by fire set the efforts back a bit but the city has worked its way through that loss.

Much of the downtown revitalization has happened through the efforts of several developers, including Kristopher Kendrick and David Dewhirst. In fact, Dewhirst was honored last Tuesday for extended construction and contracting opportunities by the city’s Community Development Department at the Equity Awards Breakfast. Eight other entities were also honored, including Knoxville Drywall, which renovated the former Chariots of Hire building and created 25 new jobs.

Downtown Knoxville is alive and well. Historic buildings have, and are being, renovated for retail businesses and apartments. There are so many ongoing and future projects that it is impossible to cover all of them in one story. Here are just a few:

The Andrew Johnson or “AJ” Building has a long history. In its heyday it was a premier hotel that saw many noted visitors and guests. One of those was the late Hank Williams, who it is said became ill and was taken by his driver in the middle of the night from the hotel and driven out of state, where he died in the car. Some people believe that the famous country singer and composer died at the hotel.

At one time the AJ Building was the tallest in Knoxville, the home of WNOX, and Amelia Earhart lodged there the year before she famously disappeared.  Today the Knox County Board of Education resides there with other services and offices.

Dr. M. M. Copenhaver was a renowned Knoxville physician who had a vision. Despite being in the middle of the Great Depression, Copenhaver decided he wanted something much larger than his at-the-time office in the Burwell Building.  He knew medical professionals and others would come to a new building and they did. He and Dr. Herbert Acuff found financing and built at 603 Main Street. The Medical Arts Building planned was to be 13-stories tall, but the economy limited it to only 10 stories. Even so, the building can boast of  “upscale” marble and terrazzo floors, mahogany doors, vaulted ceilings, and brass elevator doors.  A multi-story parking garage was planned to be built next to the building but the economy limited it to four floors.

The building project was completed about 1930 but the economy caught up with the project, just as it had limited the number of floors, and in that decade the building was acquired by the Metropolitan Life Insurance Company that, in turn, sold it an out-of-state owner.

Today the Medical Arts Building is the location of luxury apartments and leasing is underway. The apartments include security, wireless internet, designer kitchens, new appliances, and one, two or three bedrooms. You can stop by as the building renovations are still taking place or call the Medical Arts Property Management at 766-2099.

The Burwell Building, located next to the Tennessee Theater on Gay Street, actually outdates the theater. Built in 1907, it was the Knoxville Building and Trust Building, and was the tallest building in town at the time.

When the bank closed the Southern Railway Company moved its main ticket office there. Then the building was bought by the C.B. Atkins Company and named “Burwell” after the family name of the owner’s wife.

Today the building houses up-scale apartments and is ideal for anyone wanting to be right down town and who wouldn’t want to be next to the Tennessee Theater?

Art Clancy has developed the first floor corner of the Burwell Building into an Irish-theme pub and hopes to open in early May.

Clancy’s Tavern and Whiskey House features woodwork by Art Clancy and women will appreciate the purse hooks on the sides of the bar so they never have to put their purse on the top of the counter. There are lots of other special amenities there and, even before it opens, you can buy Clancy tee shirts and other items.

Many people are anxious to see the tavern open, but not as anxious as Art Clancy. The application process, the renovation, and a battle with the city to get the sign he wants has held up opening. You can follow Clancy’s progress on Facebook or at www.clancystavernknoxville.com. You can also call the tavern at 384-6861.

Located at 530 Gay Street the Farragut Hotel developers recently received approval from the city council for a 25 year agreement in lieu of taxes. The idea is to renovate and create a hotel with 190 rooms and $ 40 million is the anticipated investment by the Farragut Group, LLC.

The renovated hotel will also have a restaurant and ballroom. At one time the Farragut and the Andrew Johnson were the premier hotels in Knoxville. The Farragut closed in 1977 as a hotel.

The Farragut was the place the Southeastern Conference (SEC) was formed and had guests like Babe Ruth and many others over its long years of operation. Today the only tenant in the hotel is the French Market.

After months of meetings with restaurant owners, the public, and those food-truck vendors that want to expand their downtown business, the city has issued new regulations. While it opens up some sections of town to the vendors it also restricts some areas.

Applications for operating permits are being accepted by the city from the mobile vendors and parking for vendors have been set up in five downtown zones. Vendors can apply for one of two permits. For an annual fee of $ 200 a permit will allow a food truck to operate on “appropriately zoned private property” with the property owner’s permission. For $400 annually the vendors will be permitted to operate on private property and in designated zones and hours on city streets.

Patricia Robledo, Knoxville’s Business Liaison, said the second permit was created as some food truck vendors were not interested in operating on the public right of ways and so a second tier was established for operation on private property.

The designated public zones and hours have been established based on feedback from the Knoxville Mobile Restaurant Association and two zones, Locust Street and Cumberland Avenue and along Depot Street, have been “put on hold” and may be added later.

A complete list of zones and hours, along with the pilot program rules can be found at www.cityofknoxville.org/business/mobilefood.asp.

The L&N STEM Academy resides now in one of the most recognized buildings in Knoxville. The L&N Station, on the corner of Western, Broadway, Henley and Summit Hill Drive, was built in 1905. Renovated for the 1982  World’s Fair it was added to the National Register of Historic Places in 1982, and although it stopped operation as a station in 1968, the L&N offices remained there until 1975.

In 1985 the building was renovated by Alex Harkness and was used for special events. When Ye Olde Steakhouse burned the historic restaurant operated out of the station for two years until moving back to its location on Chapman Highway.

The L&N Station was one of the most elaborate of railroad stations, featuring decorated dormers and a castle like appearance.

Rick Emmett, the city’s Downtown Coordinator, told The Focus there’s much more going on than most people realize, things like renovation of the Old Southern Railroad Depot into apartments, wine tasting and possible railroad museum. He said the former White Lilly building is becoming apartments, the Magnolia Urban Village will be built near the bus station, and the J.C. Penny Building will be also turned into retail stores and apartments.

The Walnut Street Garage will increase parking there to 1,000 cars plus offer retail store space. The city-owned property is next to Market Square.

The old Arby’s Building on Gay Street is becoming the “Tailor Lofts” apartments, named in honor of a tailor who once did business on the third floor. The ground floor might contain a restaurant.

The loopholes that developers must go through between plans and final construction can be discouraging and bureaucratic, but Emmett said that’s one of the things his department tries to help with.