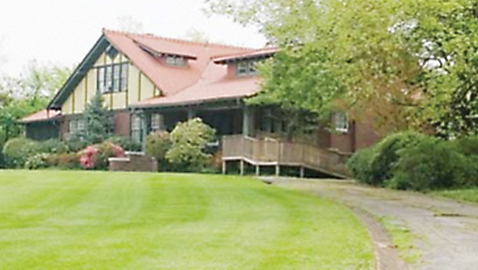 The Christenberry Home at 3222 Kingston Pike might be demolished but development of the historic home site to make way for multi-family dwellings is being opposed by neighborhood residents. (Photo courtesy of Knox Heritage)

Our county is the third most populated county in Tennessee, with about 441,311 people living here in our 526 square miles. The City of Knoxville has about 183,200 residents within its 98 square miles. The Town of Farragut has 20,678 people. In 2013, Knoxville was among the top 10 fastest growing cities in the nation according to CNN Money.

Knox County was created in 1792 from part of what was then the Southwest Territory, making it one of the oldest counties in the state and the capital of the territory. Knoxville later became the capital of Tennessee prior to its moving to Murfreesboro and then to Nashville. Since its creation the county and city have seen boom and bust, but in recent years has fared much better economically than many other areas.

During the last 20 years the city grew briefly with a spurt of annexations under Mayor Victor Ashe but, since then, the city has paused any further taking of the county and began concentrating on recovering, renovating, and renewing neighborhoods, buildings, and the downtown area. Conservation-minded groups have focused on the creation of greenways, walking and bike trails, and preservation of homes, buildings, and historic sites including the Civil War forts overlooking the city.

Under the MPC, there is the Historic Planning Committee and the Board of Zoning Appeals. The MPC also administers the Small Area and Neighborhood Plan with projects including the Bearden Village Opportunity Plan, the Broadway-Central-Emory Place plan, the Fort Sanders Neighborhood plan, the Inskip Small Area plan, the Lonsdale Redevelopment plan, the Oakwood-Lincoln Park Neighborhood plan, and the Vestal Site Improvement plan.

Farragut has its own city government, Planning Commission and Board of Zoning Appeals. Gary Palmer, Assistant Town Manager, told The Focus that neighborhood homeowner associations are consistently notified of zoning changes, which also appear on the town’s website and are published. He said the planning commission meets monthly on the third Thursday at 7 p.m. All town meetings have a public forum and anyone can get information by calling 966-7057 or going on the internet to “townoffarragut.org.”

The Office of Neighborhoods

Operating within the city’s Community Development Department, the Office of Neighborhoods works with established neighborhood groups and with new or emerging organizations to strengthen and improve Knoxville.

Groups in neighborhoods in or partially in the city can register. Such groups include neighborhood watches, associations, home owner’s organizations, tenant groups, and the like.

The Office of Neighborhoods helps the groups engage in citizen-led improvements, based on each area’s unique assets and needs as identified by residents. It provides groups with leadership training and other organizing tools. A website is maintained at www.cityofknoxville.org/neighborhoods and anyone interested can call 215-3232. The office is in the City-County Building downtown. A weekly newsletter is published and leadership classes are held each fall.

David Massey, Neighborhood Coordinator of the Office of Neighborhoods, said that there are presently 120 neighborhoods in the city directory and he explains that of those some 80 are active. He said that those active groups are assigned a liaison police officer that meets with each group. Massey can be reached by phone at 215-3232.

Community groups recognized earlier this month at the City of Knoxville’s Neighborhood Awards and Networking Luncheon for their outstanding work include: the Alice Bell Spring Hill Neighborhood Association, which negotiated with a cell tower builder for a better outcome; the Lakemoor Hills Homeowners Association, a county and city group that worked through some privacy issues to use technology to prevent crimes; the Lyons View Community Club for creating a partnership to upgrade their community center; the Parkridge Community Organization that supported a butterfly garden, historic home tours, and transformed a freeway underpass; the South Woodlawn Neighborhood Association for several major projects including an outdoor classroom, a community wildlife habitat, and programs to honor civil service workers; and the Western Heights Residents Association which partnered with an outside organization to build a proud community that is prepared to “take back the neighborhood.”

The Neighborhood Advisory Council is the advisory and partnership group that advises and provides feedback on the programs and policies of the Office of Neighborhoods. It brings issues to the attention of the city, proposes responses and solutions, and serves as a sounding board for city initiatives and proposals.

The membership has been enlarged to include two representatives from each City Council District and at least three At Large members. The meetings are hosted by David Massey of the Office of Neighborhoods.

The city office annually recognizes active and successful neighborhood organizations and chooses a “Good Neighbor” of the year.

In a recent Advisory Council meeting, Massey and the group considered recommendations of appointments by the mayor and heard from departing Council members.

Barbara Pelot, a former city council member who had voted to create the council while Bill Haslam was mayor, said, “I invited myself” into the group. She said the council is, “coming together with one voice. We’ve accomplished so much; this is where government should be.” Pelot was one of the At Large members and is a West Hills Community Association member

Cathy Irwin, also departing as a member, advised the remaining Council to “be proactive. Get out there, be active, talk to people and let them know there are solutions.” Irwin is a member of the Historic Fort Sanders Neighborhood Association.

Rick Roach said, “I don’t think the city understands the resources it has. I represent an area in Knoxville with a lot of potential.” He added, “Keep the ideas of openness on the table.” Roach is a member of Friends of Williams Creek. Another Advisory member leaving due to term limits is Mae Moody of the Wilkerson Road Neighborhood Watch.

“I don’t like to see wisdom and experience walk out of the room,” Massey said of those term limited members, explaining that the Advisory Council is set up to have turnover so other people can serve. Each member serves for three years.

Currently the group is awaiting new members to be named who will take their seats in April. The group will be talking about speed bumps vs. rumble strips for traffic calming, portable speed limit signs and other neighborhood topics in the April meeting as well. Massey said the mayor is asking all the departments for a budget request plus a budget request with six percent cuts. Massey said his office will roll out an Emergency Preparedness program in August, similar to a Neighborhood Watch, and that speakers will be available on the topic. The office’s Neighborhood Directory provides contact names and information for more than 110 neighborhood groups in the city. It also can provide a Guest Speakers Guide and each member neighborhood organization can have a web page on the city’s web site.

The Advisory group also learned that Ed McMahon, a consultant of sustainable development, will be speaking on March 26th and 27th.  The presentation is free to the public and will be held at the McCarty Auditorium at 1715 Volunteer Blvd on the 26th from 5 until 6:30 p.m., and on the 27th from 10:30 until noon at the East Tennessee History Center at 601 South Gay Street.

The Advisory Council meets each month on the second Wednesday at 4:30 at the L.T. Ross Building at 2247 Western Avenue.

The Council of Involved Neighborhoods (COIN) is a non-profit group that tries to get neighborhoods groups talking with each other. David Gardner of COIN says they are working with the city to allow more than one city-supplied sign per neighborhood and also with his Lake Forest Neighborhood to place a larger marble sign there. He said COIN also works with neighborhoods on larger zoning issues and will occasionally speak to the city council. Gardner can be reached at davidgardner@att.net.

Over the past year, many neighborhood groups have stood up to local developments that they thought could harm their area by increasing traffic, destroying the neighborhood concept, taking away green space, or violating zoning.

The groups regularly appear before the MPC, city and county government, the Board of Zoning Appeals, or even consider court action to stop a project they object to seeing in or near their homes.

Neighborhoods in West Knox County have united to push for a Hardin Valley Middle School, even sending speakers to the Board of Education meetings. They cite the area’s population growth, the cramped condition in area schools, and the need for a closer school as reasons for a new school.

Groups in Mechanicsville took to the planning commission and the city council to testify both for and against the conversion of the Old Moses School to senior living apartments and got some restrictions placed on the project.

Neighbors of the Old Knoxville High School on Central Street also organized to speak for and against the project, ultimately receiving some concessions from the developer.

The Inskip Neighborhood Association successfully pushed the planning commission into rezoning most of their area as R-1 and R-1A, restricting further apartment development. A few other Inskip property owners spoke up and got to remain R-2.

Residents around Emory Church Road have spoken against a large apartment development there and haven’t given up although the plans were approved by the MPC and County Commission. That matter may find its way to court.

Neighborhood groups have also opposed the construction of a new Tennova Medical Complex. The Middlebrook area group and other neighbors fought the new hospital through the MPC, City Council, and Board of Zoning Appeals and now may fight the hospital in Nashville when Tennova’s parent company files an application for a “certificate of need.” Opponents are waiting to hear when the letter is filed and said the new owners of Tennova, Community Health Systems have not responded to inquiries. So for now the proposed Tennova complex is on hold.

The Sequoyah Hills association is currently trying to stop a development on 5.66 acres, the site of the Dr. Christenberry House. The developer wants to rezone to RP1. The MPC has said that the house is not in the historic zoning area nearby but would qualify for historic zoning. Opponents would like to save the old house and object to the amount of traffic that would exit there on to a very busy Kingston Pike. Apparently the objections of the residents or the possibility that the RP1 zoning might fail may have caused a change in development plans. Unlike many developments the request for zoning is coming from the Christenberry family instead of a developer.

Neighborhood organizations are vital to the upkeep of local parks. While not necessarily their duty, most groups take pride in their parks and their members and volunteers plant flowers and trees, pick up trash, and keep the parks safe.

There are many local parks in Knox County and Knoxville and, depending on the park’s location; it could fall under either body. In most cases the community organizations should check with either the City or the County about making improvements or changes. The Knox County parks can be contacted by calling 215-6600. The city parks can be contacted at 215-4311. Both governmental bodies maintain web sites. Information about Greenways can also be obtained at those telephone numbers or online.