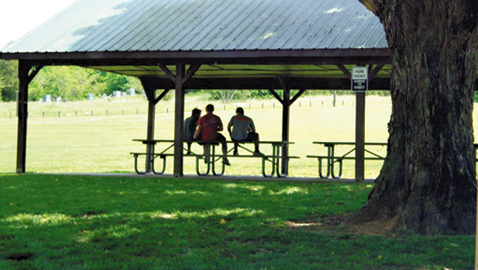 Photo by Mike Steely
Teenagers hang out at Mascot’s Park, in the center of the small community. Their classes at Carter High School are over and they’re thinking about what to do this summer.

It may be the most unique neighborhood in Knox County. Isolated in the eastern corner, separated by distance and the river, Mascot is also separated by history and culture.

About 2,000 people call the Mascot community home. Founded by the American Zinc Company as a company town the community is much like many of the other old East Tennessee mining company towns except that instead of coal fuelling the boom back then it was zinc.

Most of the homes in Mascot were originally company-owned homes. When the company pulled out in the early 1960s the homes were sold to former employees. Some still remain in those families and others have been repurchased by later residents.

To reach Mascot you can take Rutledge Pike to Old Rutledge Pike and follow it to the Mascot Road. You pass a few houses and eventually drive under an overpass and you’re there. An alternate route is to take Andrew Johnson Road almost to Strawberry Plains and turn left on Mascot road and head east. Just after the Industrial Park take a left across the tracks and you’re in the historic little community.

Rutledge Pike begins in East Knoxville at Magnolia Avenue and shoots northeast at Highway 11W. The four-lane highway eventually passes through Rutledge in Grainger County and continues its northwest route to Rogersville, Kingsport, and Bristol. While most of us probably know Grainger County for its tomatoes, the small town of Rutledge is the county seat. Beside the courthouse sits a small cabin said to have been a tailor shop of a young and future president, Andrew Johnson.

Rutledge Pike in Knox County begins as an industrial area for several miles. The Pike is home to Bridges Funeral Home and nearby Holston Middle School. Further up is Kinsey Gardens, Pull-A-Part, and RV’s For Less. Just north is the Skaggtown community and, to the west, House Mountain State Natural Area.

When Rutledge Pike reaches the Blaine Community it is crossed by Emory Road, one of the oldest routes in the state.

Along Old Rutledge Pike toward Mascot, there is a huge railroad yard, several farms, some mom-and-pop stores, as well as storage and scrap yards. You really don’t get a feeling of the community until you take the Mascot Road and go beneath the overpass.

Suddenly you are back in time.

Mack Walker, who lives in the two-story white house on the edge of the Mascot Park, told the Focus that his house had been a men’s boarding house and later a women’s boarding house back when the mining company owned the community. He said that American Zinc had its own law enforcement and pointed to the library just up the street, which was used as a company jail.

Ralph McGee, the librarian, said the right side of the current library was used as a small jail and the other part of the library was added later. Now a part of the Knox County Library System McGhee and Jackie McSwain were busy preparing books to be sent to other libraries around the county.

McSwain, a native of Mascot, spoke of the many photos there of the former mining community, the former school, and many other historic features of the area.

Ms. McSwain also helps out with a Mascot charity known as Year-Round Santa. She runs a flea market every weekend at the Four Way Market on the Andrew Johnson Highway. She explains that the $10 set-up fee all goes to the charity.  Ronnie Greene, a retired truck driver, and his wife Kathy, founded Year-Round Santa to provide toys and relief to local children and families in need. His wife has passed away and Ronnie, along with volunteers, continues to warehouse and distribute items. The charity is well known in East Knox County and Greene’s home atop the park is stocked with needed items. The effort has been featured on national and local television and in various newspaper and magazine articles. Everything donated is given away. You can donate to Year-Round Santa at 1821 Santa Claus Lane, Mascot, TN. 37806.

Over at the post office Tonya Gass, the “officer in charge” as she puts it, says that many of the Mascot people were zinc company employees. The post office and library tend to serve as the gathering place for locals. The internet is available at the library and patrons can order any book that is not on the shelves.  Gass said that if someone doesn’t come in to get or post mail the community becomes concerned and goes to check on them. She knows all her patrons by name and often the locals stay around for some conversation and to catch up on local news.

Just east on Mascot Road is a former residence that is now the Mascot Senior Citizens Center. It is named for former Sunday School teacher, Barbara Abernathy.

Thomas Talmage Morell, known as Tam, grew up in Mascot and said that the old home was pretty run down when the local citizens were able to buy it.

“Lots of people donated their money and time,” he said. At first it was used as a community center and was used for birthday parties and gatherings. Then it was turned over to Knox County and the seniors meet there.

Morell said most of the houses in the center of Mascot and along Staff Drive are original mining town structures, along with those on Sailor’s Ford Lane.

“When we were growing up the company funded the houses, the park, tennis courts, a community hall, a drug store, and the doctor’s office. We had Little League baseball teams, went fishing and swimming in the Holston River,” he said.

Over at what is now the Industrial Park, Morell said the company owned a large farm and dairy operation and the milk was delivered to the homes.

“It is not the close knit community it once was. We never locked our doors,” he said, adding that “To this day those people from Mascot agree they loved it.”

Some of the current home owners live in the “company” houses but newer arrivals have bought or rented homes there.

“The older folks have either retired or passed away,” he said.

Both Morell and Mack Walker agreed that there should be better law enforcement in Mascot. Morell said that he rarely sees a sheriff’s cruiser there.

“Over in the area of the rock piles and mills, on top of a tower, was once a red light. There were few phones at that time. My uncle was the local (company) law enforcement and someone would notify the mill of a problem and the mill would turn the red light on. That informed my uncle to get over there,” he said.

He added that the company had a whistle and would blow it in different sequences to tell people about fires or other emergencies; the last of the whistles would tell the residents which section of the town the emergency was located.

“People then know to either get themselves to safety or get over to help with the call,” he said.

I have a warm place for Mascot. I grew up in a little mining town, ours was coal and not zinc based, but when the mines closed the town almost vanished. Like Mascot some of the mining families bought the mining houses and stayed there for generations.

But Mascot hung on. Several of the houses there are modern and well maintained, expanded beyond what they once were. Generations grew up there. Many of the older folks love small communities like Mascot but most of the young people can’t wait to graduate and leave.

Yet, like me, they will hit that time in their life when they want to return to their home town. Some will and find it that it has not changed from when they left.

Sometimes you can go home again.