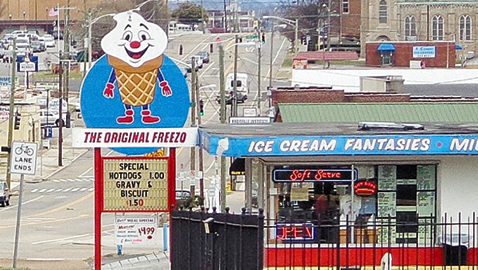 Photo by Mike Steely
The Original Freezo on Central, still open after all these years, is a nostalgic tasty treat of ice cream and pleasure foods.

North Knoxville is primarily fed by two main roads, Broadway and Central Street. Both Broadway and Central offer strips of mixed businesses, chic little clubs and shops, thrift stores, strip malls, fast foods and local restaurants and, of course, unique neighborhoods. This week, we’ll look at the area from Old City to Happy Hollow on Central and North Broadway to I-640, all in a hop-skip-and-jump view of the area’s neighborhoods, businesses, and other interesting features.

North Knoxville began to boom in the 1880s with the coming of the railroad. By 1889, the area was incorporated as its own town with L. A. Gratz as the first mayor. The neighborhood had a mainly well-to do populace, enjoyed its own water and electric lighting, and businesses thrived there. In 1897 the area was annexed by the city of Knoxville.

Trolley tracks connected North Knoxville with downtown and the coming of automobiles brought more streets and thus neighborhoods developed. Many of the finer homes that still exist today were built between 1880 and 1930.

Several remarkable changes are taking place this year in the North Knoxville area. The Old Knoxville High School is becoming senior living apartments. The John H. Daniel clothing company is leaving Jackson Avenue and moving into a totally renovated Star Sales company building on Central Avenue. Old City is getting a face lift and something is beginning to happen on Broadway…

This past week Mayor Madeline Rogero announced the city is now ready to look at challenges along the North Broadway Corridor.

Art Cate, president of the North Knoxville Business and Professional Association, told The Focus that he and others met for a pre-planning meeting last Tuesday evening to discuss potential improvements to the corridor. Invited to the first meeting were representatives of the neighborhoods of Belle Morris, Edgewood Park, Fairmont-Emoriland, 4th and Gill, Oakwood Lincoln Park, and Old North Knoxville.

“As you are aware, there are many challenges facing neighborhoods and businesses in the North Broadway Corridor, especially in light of the potential closing or down-sizing of Tennova Healthcare’s Physicians Regional Medical Center,” the mayor told the group. She said the meeting was a “starting point” toward establishing realistic priorities.

“It’s an exciting thing,” Cate said. “It’s informal right now. Downtown has developed so much that the entrance ways need to be addressed also.”

Andie Ray, the new president of Old North Knoxville, Inc. , echoed Cate’s excitement. She said that all the neighborhood representatives that attended the meeting are looking at what assets they have and making a list of houses and businesses in each neighborhood as a tool for the project.

Old North Knoxville, Inc. is an active neighborhood group established in 1978 to preserve, promote, and protect its historic neighborhood. ONK has been involved in planting and maintaining the playground on old Oklahoma Avenue, even building a Gazebo there. The group has applied to the TVA for solar panels for the structure to supply light and power.

Andie Ray said ONK is a combination of the old and new. The association is planning a park clean up April 6 and an Easter Egg Hunt April 19, which Ray says is a “huge event.” On April 25, Ray says they will do a cleanup of First Creek Greenway and creek and will supply work gloves for anyone who volunteers. They also sponsor a Holiday Home tour the first Saturday and Sunday each December.

Old North Knoxville is a wonder of different architecture, everything from Queen Anne to Colonial Revival. Most homes there date, at the latest, about 1940. In 1992 the area became a Historic District and home prices increased more than 150%. The streets are lined with trees, sidewalks, and shade. The homeowners are proud to live in one of the oldest neighborhoods in Knoxville and fight hard to keep it up and keep it residential.

“I love that almost everything our family needs are right here in our community – great food, shopping, recreation, fantastic neighbors, and schools our kids attend. And we can walk or bike it!” says Knox County Commissioner Amy Broyles, who represents the North Knoxville district.

“I’m excited about all the new developments and the continued vitalization of our historic neighborhoods. We often remark that there is no where in Knoxville we would rather live.”

Knoxville’s Old City is located just south of the Central-Broadway intersection and for locals is often the entrance into Knoxville and access to Gay Street and downtown.

Oddly enough, the Old City isn’t the oldest part of Knoxville. In its early days it was much like a wild-west town with saloons, crime, and general havoc. Immigrants and railroad workers partied there and wholesale warehouses cropped up to supply regional merchants.

By the late 1980s, Old City began getting a better reputation. New businesses arrived, more peaceful taverns and restaurants opened, and the young professionals began not only shopping there but living in loft apartments there as well.

Many of the neighborhood’s historic buildings are on the National Registry. Currently many of the buildings are being repaired or restored, getting ready for a busy nightlife visitation by adventurous singles and couples. The construction is visible now along the street and life is returning, as sure as spring is coming.

Three of the region’s most noted brand names once occupied Old City. White Lily Foods was there since 1885 and closed in 2008. JFG Coffee once took up many buildings there on West Jackson Avenue and became JFG Flats, a residential loft habitat. The John H. Daniel Company, known nation-wide for custom tailored clothing, operated there since 1928 and is currently renovating the former Star Sales building on Central where it plans to relocate.

Old City has been the location in novels of the earlier, rougher history of the neighborhood. Today it has been reborn and is flourishing as “The” place in Knoxville to dine, hear music, and gather.

So, is it Central Street or Central Avenue Pike? What’s the difference?

North Central Street begins downtown and runs up through the corridor until it ends at Heiskell Avenue. The name disappears and it becomes Bruhin Road as it crosses the gap below Sharp Ridge and then reappears just across I-640. A left turn there is where it becomes Central Avenue Pike.

At one time, before the interstates, Central Street was the main route into Knoxville from the north. Highway 25W, more locally called Clinton Highway, brought traffic downtown. The heyday of the corridor ended with the completion of Interstate 75 as Highway 25W dumped travelers onto the interstate highway.

Today, Central Street is struggling to be restored. The northern section is a hodgepodge of various used tire dealers, used car lots, recycling businesses, and thrift stores. One Central Avenue community, located between Baxter and Scott Avenues, is pulling itself back into the commercial spotlight. It became official three years ago when Dan Brown, the city’s first African American mayor, officially recognized “Happy Hollow.” A nameplate hangs now above the avenue, designating that section of town.

In recent years the homeowners around Happy Hollow have been reviving their streets and Victorian-style homes and new businesses are claiming buildings that had been empty or little used. The city created the Downtown North Redevelopment Area in 2007 to promote economic development there and has worked with the area on improvements and streetscapes.

The Happy Hollow stretch of Central has some very unique and eclectic businesses. City Councilman Nick Della Volpe highly recommends the Flats and Taps Neighborhood Pub and the Taoist Tai Chi Society, at 1204 and 1205 Central. Both were part of a section of renovated buildings a few years ago. Della Volpe also likes the North Corner Sandwich Shop at 2400 Central and mentioned the Time Warp Tea Room at 1209 Central.

“Downtown North is extending that way and I’m excited about the fixing up of all the old Victorian homes, “ Della Volpe said.

Three Rivers Market, at 1100 North Central Street, is one of the unique businesses in the area and is a community owned cooperative natural foods grocery. The coop owes its existence to the Knoxville Community Food Cooperative founded in 1981 with the idea of serving its members with local, natural, and organic foods. In 2005 the group became Three Rivers Market, a customer-owned food co-op. The market is open to the public although the co-op is there to serve its members, with the idea to create and nourish a healthier environment, healthier people, and a healthier community.

Another unique business is Chicken City at 2115 North Central. It’s a favorite of locals looking not only for fresh chicken, but other meats as well. The busy little business is known for its staff as well as its meat.

Further down the street from Chicken City is an icon on Central, the Original Freezo. The drive-in restaurant began in the early 1940s and has been there ever since. The ice cream and food is a nostalgic trip to earlier times and the restaurant was a forerunner of today’s fast-food national chains.

Freezo is at 1305 Central Street and is owned and managed by Darrel Dalton. The nostalgic Freezo sign reminds local people of earlier days when a trip to the drive-in restaurant was a special outing. And what kid wouldn’t want to stop by for a tasty cone, even today?

The Retrospect Vintage Store, at 1121 North Central, is a partnership between two former shop owners that came together to create a retro-themed business. Although they do rent space to other sellers, the store is mostly things the partners have collected and offer for sale, including collectables, clothing, shabby chic, local art, books and retro toys.

The partners, Gina Alazawi and Tree Ely-Griffin, proclaim their store as for “men, women and toy geeks.” You might find anything from 45 RPM record players to a Hardy Boys lunchbox there.

“The rejuvenation of Happy Hollow is an example of the good results that come from providing façade loans to fix up storefronts and business expansion loans,” Mayor Rogero told The Focus.

There are many other thriving and active neighborhoods in North Knoxville. Recent local changes, like the selling of Old Knoxville High School, rezoning, and proposed improvements have seen the neighborhood residents and their associations publically speak out for and against changes.

Other neighborhoods in the area include North Hills, 4th and Gill, and Fairmont and Emoriland.

Kim Trent, director of Knox Heritage, Inc., said her organization has worked with 4th and Gill and Old North Knoxville associations in restoring blighted homes and finding new residents. She said that Knox Heritage also helps with neighborhood tours, citing the tour of the George Barber houses. Barber was one of the prominent Knoxville architects that designed and built many homes in North Knoxville.

She also said she is working with the developer of the Old Knoxville High School on a preservation tax credit.

Mayor Rogero lived in Oakwood-Lincoln Park, North Hills and the Fairmont and Emoriland neighborhoods for more than 16 years. She now lives in South Knoxville but said she raised her children and cut her political teeth in North Knoxville. North Knoxville has benefitted from her initiatives, first from serving as the city’s Community Development Department director and now as mayor.

5th District Councilman Mark Campen told The Focus, “Good things are happening and I’m very pleased.” He said he will be pushing for new funds in the 2015 budget for improvements between Woodland and Heiskell Avenue and that the John H. Daniel Company’s move to North Central is a great bonus for the neighborhood.

Looking ahead, he also said that the First Creek Greenway needs to be completed and a pedestrian and bike route needs to be at the Broadway-I640 intersection, maybe along Old North Broadway.

“We just need to keep the momentum going,” Campen said.