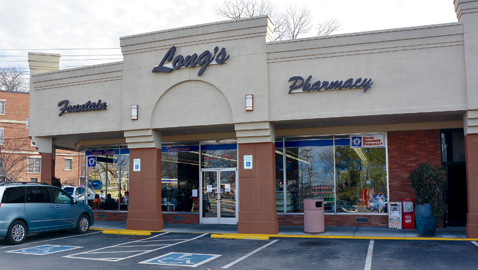 Photo by Dan Andrews.
Long’s Drug Store was established in Bearden in 1956 and still today boasts a soda fountain and sit-down bar counter.

In the past 30 years, no area in Knox County has grown faster than West Knoxville. Stretching from the UT Campus to the Loudon County line, the area has blossomed with subdivisions, apartments, shopping centers, malls, theaters, stand-alone local and national chains, medical offices and hospitals.
The influx of out-of-area professionals and their families have transformed the western portion of the city and county. West Knoxville neighbors are socially and politically active and stand together to protect their neighborhoods against crime, over-commercialization, and traffic and to encourage area beautification.
Farragut, Knox County’s other city, pulled away from any Knoxville annexation to keep its traditional and new residents. One of Knox County’s oldest communities, Concord, grew and then reoriented itself with the creation of Lake Loudon. Today Concord has a small, one-sided downtown and is a suburb of Farragut and the Northshore communities.

Bearden
The West Knoxville neighborhood of Bearden rests along Kingston Pike, just beyond Sequoyah Hills. Most locals consider Bearden as stretching as far west as West Town Mall and others consider it ending at the foot of “Bearden Hill” at Papermill Drive.
Bearden High School, named for the founder of Bearden, is not really in the Bearden neighborhood. It is located west of West Town Mall. West High School, built in 1951 with the closing of the Old Knoxville High School, is between Kingston Pike and Sutherland and students there come from Northwest, West Valley, and Bearden Middle Schools.
The community began around a fortified house near Kingston Pike and Northshore Drive. Initially known as “Erin” Bearden began to expand with the survey and construction of Kingston Road, now Kingston Pike. Early history saw raids there by the Chickamauga Cherokee and a “Wild West” reputation in the early 1800s.
Annexed by the city in 1962, the Bearden neighborhood is named for former Knoxville mayor and state legislator Marcus De Lafayette Bearden. Bearden and a partner built a paper mill on Third Creek and the road there became “Papermill Drive.” Early settler Major Robert Reynolds, a Mexican War officer, built a large house, Knollwood, which still stands today.
The construction of I-40 and I-75 caused a surge in homes and commerce in Bearden and along all of Kingston Pike. Western Plaza Shopping Center and West Town Mall pulled shoppers from the entire region and the growth of neighborhoods in Bearden and beyond lured home buyers. Today, Bearden and Kingston Pike are the main commercial area in the county.
Notable businesses and places in Bearden include the Mayo Garden Center, Calhoun’s Restaurant, Homberg Place, Bennett Galleries, Western Plaza, Knoxville Plaza, Bearden Shopping Center, McKay Used Books, Cherokee Country Club, Northshore Park, Summit Hill Medical Group, The Newton Jones Agency, Humane Society of East Tennessee, Bonefish Grill, Young-Williams Animal Center, Rose Mortuary, The Organery, and Arnwine Furnishings.
The Bearden Village Greenway stretches from Bearden Elementary School to the Third Creek Greenway which connects to the Sequoyah Greenway and the City Greenway and continues to downtown along the waterfront.
The Bearden Village Greenway is the prize of the Neighborhood Associations and the Bearden Council. The 23rd annual Greenways 5K and 2-mile Walk/Dog Jog begins there at West High School April 12th and traverses the Third Creek Greenway. Proceeds benefit the Knox Greenways Coalition and Legacy Parks.
“We’re working with the Metropolitan Planning Commission to get the neighborhood zoned R-1E, exclusive for single family homes,” said Amy Midis of the Forest Heights Home Owner’s Association. She said many homes there face Sutherland Avenue where it is becoming more commercial. She said, “We want to protect our boundaries.”
Midis credits Terry Faulkner, president of the Bearden Council, for many of the improvements in and near Bearden including the greenway. She also said that City Councilman Duane Grieve “is a tremendous advocate for us.”
The Forest Heights Association meets every other month and their next meeting is May 12 at the Bearden United Methodist Church.

The Bearden Council
The Bearden Council meets monthly with the idea of implementing the Bearden Village as part of MPC’s “small area plan.” In 1989, community volunteers began working with city planners, state and local governments, businesses, developers, institutions and non-profit groups to generate the Bearden Village Plan. The plan was approved by the planning commission and the city council. This plan is to increase pedestrian use, encourage sidewalks, create and care for Greenways, and work with homeowners and businesses to create a “village” atmosphere.
“We started with nothing and got five neighborhoods that join a commercial neighborhood together,” Mrs. Faulkner told The Focus. More than $3 million was generated to build the 5 plus miles of greenway and sidewalks, transit stops and shelters, plant trees and create historic markers.
Making Bearden greener also increased property values and attracted upscale businesses. Mrs. Faulkner says the Village Plan was approved in 2001 and that City Council has helped enormously, including Jean Teague, Barbara Pelot, and Grieves.
“We have also added over 700 trees in the pedestrian areas with the city, TDOT, and various merchant and developers’ help. It is a real success story,” she said, adding that the group works with new business developers to encourage sidewalk construction, adding benches and shelters at bus stops, encouraging small “monument signs” rather than large business signs, and watching for new business construction so as to work with early development of those sites.
The Bearden Village Greenway project has become successful and has many people using it. “You run into people on the greenway you’d never meet otherwise,” she said. Every Saturday, Bearden Bike & Trail sponsors a 2-hour training bike ride there starting at 9:30 a.m. at 126 Forest Park Blvd. You can call 200-8710 or go on the internet at www.beardenbikeandtrail.com.
City Councilman Duane Grieve told The Focus that the Bearden Council is one of the successes and a model for community involvement.
“One of the projects we’re working on now is the creation of a little park at the corner of Kingston Pike and Forest Park Boulevard. The green space will have trees, grass, benches and there’s a bus stop there. There was an old gas station there before and we hope to tie the park into the greenway,” he said.
Brickyard and Lyons View
Barbara Pelot, former City Council member and a member of the Knoxville Neighborhood Advisory Council, said that Bearden always been a progressive and diverse community.
“Bearden is the core community. A lot of UT professors moved there and a lot of people from out of Knoxville settled there. It was a melting pot,” she said.
Mrs. Pelot spoke about the African-American neighborhoods such as the Brickyard and Lyon’s View sections as being one of the first neighborhoods in Bearden. She recalls that most of the bricks in earlier homes there came from the old brickyard. She also said the coming of the automobile boosted the growth of Bearden as people could live there and commute into town.
The round historic markers, embedded in sidewalks in the neighborhood, identify early church history, schools, moon shining activity, an early airport, the history of an armored cavalry division, the brickyard, and when the first train arrived. A marker, at the transit stop at Kingston Pike and Noelton across from Western Avenue, tells of the early highway history and Lyon’s View Drive. Up at Pond Gap a marker tells of a drive-in theater that was once there.