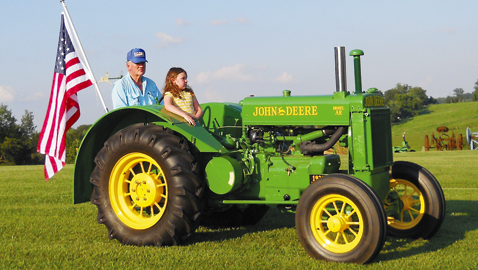 How long could it take to look at a tractor or two?  Longer than I had gauged!  There were tractors dating back to 1935, an orchard tractor with large fenders over the tractor tires, and a museum-like collection of antiques.  Our mother was most impressed with the miner’s lunchbox, probably because her father worked in the coal mines during his early years.  I really enjoyed the big swing positioned perfectly to catch the summer breeze.

Grady Lett’s barn is home to eleven antique John Deere tractors, all in showroom condition. Several have a huge American flag already mounted and ready to roll along the parade route.  It was not surprising to see all of those beautiful flags from this veteran who served in Korea from 1963-64 and was there when President Kennedy was assassinated.

Lett’s many tractors are a familiar sight in the Gibbs and Corryton Christmas Parades.  “It looks like a parade in itself,” his wife said.  Polly Lett, Grady’s wife, was referring to all those big green and yellow machines rolling down their driveway to join the parade.  Mother suggested to me that such a scene would make a great picture.  I put it on my list.  In the Knoxville Veterans Day Parade, Grady pulled a float carrying veterans from the Korean, Vietnam, WWII, Iraq, and Afghanistan Wars.  Two of the veterans were Purple Heart recipients, and two were Bronze Star recipients.  He transported three tractors and a wagon up the interstate for the Dollywood Parade where he has participated four times.

Grady’s interests do not end with the tractors.  He is very much interested in the community and its people, too.  He has hauled a wagon full of Boy Scouts and said they are some of the most well-mannered he has seen.  Grady also helps them with their Eagle Scout badges.  I learned that the man with those bigtractors has a big heart, too.  While I was sitting in the smaller wagon, beautifully built by Grady and Polly, he told how a little boy in a wheelchair sat in that same wagon while a family friend (Julie Goldman) pulled him around his farm.  Sitting there, I could imagine the child got as much joy out of hearing the tractor engine sputter as the grown men do.

Grady is a 1961 Gibbs graduate who gives back to his community in many ways.  He is looking to sell a couple of those John Deere tractors—but he will still have plenty for the parades.  The next time you see a John Deere, look closely.  It just may be one belonging to that man with the big barn full of Deeres and a big heart to go with them!