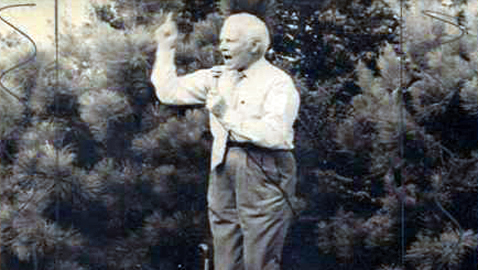 From the author’s personal collection.
Senator Albert Gore literally campaigning on the stump.

Congressman Ross Bass had been elected to the United States Senate in 1964 to fill out the remainder of the late Senator Estes Kefauver’s term of office. Senator Bass had to face the voters again in 1966 and the campaign would be a repeat of 1964, with Bass once again facing Governor Frank Clement in the Democratic primary and Republican Howard Baker in the general election.

Bass was upset in the primary by Governor Clement, who in turn lost to Howard Baker by about 100,000 votes. Although Baker had run a strong race in 1964, which had not been a good year for Republicans, his victory stunned many Democrats who could not bring themselves to believe a GOP candidate could win a statewide election in what had been a one party state for decades. Howard Baker was the first Republican to ever be elected to the United States Senate by popular vote.

The Republicans also managed to snag yet another Congressional seat with the victory of Dan Kuykendall in Memphis. Kuykendall had challenged Albert Gore in 1964 and had come within fifty thousand votes of winning. Kuykendall had run against Congressman George Grider, who had defeated the last remnant of the old Crump machine in 1964. Many of Congressman Davis’s old supporters had lined up behind Dan Kuykendall and a rising Republican Party. While the Democrats still held a majority of the Congressional seats in Tennessee, the Republicans were making serious inroads in areas that had never before supported a GOP candidate.

Lyndon Johnson had been the first presidential candidate to carry Tennessee since Harry Truman, but Richard Nixon carried the Volunteer State in a three-way race with Vice President Hubert Humphrey and Alabama Governor George Wallace. Wallace had run especially well in West Tennessee, while Nixon was amassing huge majorities in traditionally Republican East Tennessee. Nixon carried Tennessee with just over 37% of the vote.

Perhaps even more shocking to Tennessee Democrats was a temporary loss of control of the state House of Representatives. The election of a Republican Speaker of the House, Bill Jenkins, was an historic event in Tennessee.

Albert Gore would again seek reelection in 1970 and he had been a consistent opponent of the Nixon administration. President Nixon had engaged in a strategy to maximize Republican strength in the South and intended to help candidates win in states that had largely been one party states since the Civil War.

Senator Albert Gore was targeted by the Nixon administration for defeat. Tennessee Republicans were energized and there were a host of serious candidates for the gubernatorial nomination. House Speaker Bill Jenkins, millionaire industrialist Maxey Jarman, and former Republican State Party Chairman Claude Robertson all made determined campaigns, as did a little known dentist from Memphis, Winfield Dunn.

There were two candidates facing off in the GOP senatorial primary as well; one was former movie star and country music artist Tex Ritter. The other was Congressman William E. “Bill” Brock, III of Chattanooga.

It was Tex Ritter who christened Albert Gore the “Old Gray Fox” of Tennessee politics. By 1970, Gore was the very essence of senatorial appearance, with a head of distinguished white hair. Ritter explained Gore was a shrewd politician, crafty and hard to pin down. It was readily apparent the Republicans were going fox hunting.

Tennessee Democrats were not deterred from fighting amongst themselves as they faced a serious challenge from the Republicans. There was a fierce primary contest for the gubernatorial election where John Jay Hooker was the favorite candidate. Hooker had run against Governor Buford Ellington four years before and run a very strong race. John Jay Hooker was considered more liberal than many Tennessee Democrats, with an urbane appearance and folksy manner. Buford Ellington was considered to be far more conservative than Hooker, with close ties to President Lyndon Johnson. Ellington had first been elected governor in 1958 as an avowed segregationist; his successor had also been his predecessor in office, Frank Clement, thereby beginning the famous “leapfrog” government in Tennessee.

Senator Albert Gore was himself the target of many inside his own party. Many encouraged outgoing Governor Buford Ellington to run against Gore in the Democratic primary. Ellington was far more conservative than Gore and even the Nixon administration did not find the prospect of an Ellington candidacy unpleasant. In the end, Ellington chose not to run, but he did encourage the candidacy of his press secretary. Hudley Crockett, a former newsman, was running to the senator’s right. Crockett’s campaign for the Senate pressed Gore hard and he carried West Tennessee heavily.

Once the primaries were over, there were several surprises. Winfield Dunn emerged from the heated GOP gubernatorial contest as the Republican nominee. Dunn’s opponents were relegated almost to favorite son status as each carried his home turf and little else. Speaker Bill Jenkins carried upper East Tennessee, while Claude Robertson carried the Second Congressional district surrounding Knoxville. Maxey Jarman did well in the Third Congressional district and much of Middle Tennessee, an area where there was a notable absence of Republicans.

Winfield Dunn proved to be the second choice of many Republicans and he did surprisingly well across the state, but carried his home territory of Shelby County, the most populous in the state, by an amazing margin of around 95%.

Congressman Bill Brock had beaten Tex Ritter easily, unlike Senator Gore who came out of his own primary battered and wounded.

Gore loathed Richard Nixon and the dislike between the two was quite mutual. Senator Gore also had little or no regard for Vice President Spiro Agnew, who at the time had become something of a political lightning rod. Agnew was adored by much of the right wing, while he was anathema to the left wing.

Gore and Agnew had traded insults publicly and Gore’s opposition to the Nixon administration was taking its toll in Tennessee.

Senator Gore had opposed two of Nixon’s appointees to the United States Supreme Court, Clement Haynsworth and Harold Carswell, both of whom had been Southerners. Gore was acutely aware of the political danger in rejecting the nominations and had initially been delighted when President Nixon had nominated Harold Carswell. Senator Gore thought he would be able to support the nomination, which would have the effect of diminishing the charge he was traitor to his own South. Much to his dismay, Carswell proved to be unfit for the high court and he voted against confirming Carswell’s nomination. Despite Harold Carswell’s being a poor choice, Gore’s opposition to his nomination made the senator’s path to reelection all the more uncertain. Senator Gore himself later confessed he suspected his “political life” might very well be at stake in deciding the Carswell issue, he could not bring himself to support Harold Carswell.

Senator Albert Gore was also afflicted with several other problems that affected his political standing. Many perceived Gore as aloof and aristocratic, although Albert Gore was anything but an aristocrat, having come from a very humble background. For years Gore had disdained many of the things incumbents do to generate goodwill, a practice scrupulously practiced by his predecessor Kenneth McKellar, as well as Estes Kefauver. McKellar was renowned for his prompt response to every letter received in his office and the numerous favors he performed for constituents daily. It had helped to make him Tennessee’s longest serving senator and in 1970 there were many who remember Senator McKellar very well indeed.

Estes Kefauver had perhaps even gone farther than McKellar, noting the various anniversaries, birthdays, and other happy occasions celebrated by his constituents, all of whom received a note from the senator.               When Senator Albert Gore suddenly started taking notice of such events, it drew not good will but suspicion and scorn as he had been in the Senate for almost eighteen years and found it to be beneath the dignity of his office.

Hudley Crockett had campaigned hard on the theme Senator Gore was out of touch with Tennessee, a theme naturally picked up by the Brock campaign. Gore enthusiastically picked up the “old gray fox” analogy bestowed upon him, claiming a gray fox was mighty difficult to catch.

The change in the way campaigns were being run in a modern age proved to be a challenge for some of Tennessee’s most popular Democrats. Governor Frank Clement, widely acknowledged as a powerful orator, had fared poorly on television. Likewise, Albert Gore was an able and accomplished stump speaker and his personality on the campaign trail seemed less remote and reserved. Still, Gore found it difficult to meet the challenges of modern campaigning.

There was no extensive entourage, which is a staple of campaigning to this day. Neither did Senator Gore have the benefit of the advance men who help shape a candidate’s schedule for maximum benefit, attracting the local television news and encouraging supporters to attend various events. Gore would oftentimes arrive in a town or city without prior notice and simply visit from person to person. While it had been effective in the past, it was long outdated in 1970.

Congressman Brock ran a tough campaign, stressing he believed and shared the values of most Tennesseans. Of course the inference was Albert Gore did not share those same values.

It would be the theme of the fall campaign and Albert Gore’s last race for the United States Senate.