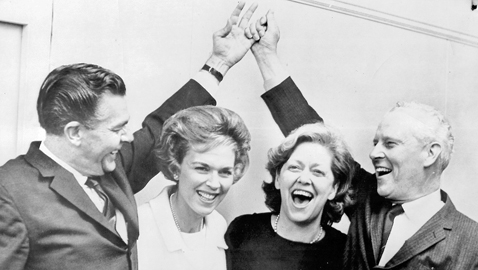 By Ray Hill
Having won a second six-year term in 1958 over serious opposition, Albert Gore returned to the Senate.  Although he had won a smashing reelection victory against former Governor Prentice Cooper, Gore believed the campaign left him with political scars that never quite healed.  The senator’s popularity in West Tennessee would never quite be the same in the future.

As 1960 approached, Gore’s national aspirations were rekindled; he longed to be on the national Democratic ticket.  Albert Gore’s senior colleague, Estes Kefauver, had waged two unsuccessful campaigns for the Democratic presidential nomination and there were indications he wanted to run again in 1960, but Kefauver was facing a difficult reelection campaign in Tennessee and focused his attention on keeping his job.  Like Gore, Kefauver was being challenged by a fierce segregationist, Andrew “Tip” Taylor, a judge who had quite nearly won the gubernatorial nomination two years previously.

Taylor ran a campaign very similar to that of former Governor Prentice Cooper, although he did not fare nearly so well.  Kefauver crushed Taylor in the Democratic primary, winning by more than 200,000 votes out of some 700,000 cast.

Albert Gore’s national ambitions died with the nomination of Massachusetts Senator John F. Kennedy for president.  The Kennedys were legendary for never forgiving an enemy nor forgetting any kind of a slight.  Gore’s own vice presidential bid in 1956 had cost Kennedy the nomination and relations between the two were never especially warm. Kennedy preferred to run with Lyndon Johnson, the powerful Majority Leader who came from the much more important (in terms of votes, both popular and electoral) State of Texas.

Senator Gore campaigned hard for the Kennedy – Johnson ticket, but Tennessee voted for Vice President Richard Nixon.  Tennessee had supported Eisenhower in 1952 and 1956; the victory of Richard Nixon in the Volunteer State in 1960 was a portent of things to come.

The dawn of the Kennedy administration did not dampen the independent spirit of Albert Gore, who immediately drew the ire of the new president when the Tennessean found fault with the appointment of Douglas Dillon as Secretary of the Treasury.  Dillon was a respected financier and the populist Gore was none too pleased with his appointment.  Gore also was part of the revolt in the Senate’s Democratic caucus against Lyndon Johnson.  Throughout the decade of the 1950s, Lyndon Johnson had been perhaps the most powerful and skillful Majority Leader since the birth of the Senate.  As Vice President, Johnson proposed to preside over the Democratic caucus, a notion much resented by even many of those who supported Johnson.  Senator Gore denounced the idea in no uncertain terms and while he was in the minority, LBJ was so distressed by the opposition, he never exercise the right to preside given to him by the caucus members.

If the decade of the 1950s were largely placid and prosperous in America, the 1960s was a decade of unrest, dissent and the beginning of a cultural war in the United States.  Albert Gore was buffeted by the winds of change in his own state.

When the Supreme Court struck down a New York law relating to prayer in schools, Senator Gore refused to support the proposed constitutional amendment allowing prayer in public schools sponsored by the Republican Leader of the Senate, Everett Dirksen.  Gore had also ably defended just about every aspect of the Kennedy administration, which was not as popular in Tennessee as elsewhere.  The politics of Tennessee were changing as well.

Former Governor Frank Clement, once the youngest chief executive in the nation, announced his intention to reclaim the governor’s office in 1962.  Clement won the Democratic nomination, but faced a stiff challenge in the general election from William Anderson, once Captain of the submarine Nautilus, who ran as an Independent.  Anderson got a considerable vote, although Clement won handily.

Gore’s senior colleague Estes Kefauver died unexpectedly in 1963 and Clement appointed Herbert “Hub” Walters of Morristown to serve until the next election.  Walters, a multi-millionaire businessman who was oftentimes referred to as “Mr. Democrat” in Tennessee had been an important ally of the late Senator McKellar and was quite close to Governor Clement.

Both of Tennessee’s seats in the United States Senate were up for election in 1964, just as they had been thirty years earlier in 1934.  Gore would be running for reelection to a six-year term while the other seat would be up for a two-year term to complete the late Senator Kefauver’s term.

Governor Frank Clement, despite having just been elected to another term in the statehouse, decided to run for the United States Senate.  Clement faced Pulaski Congressman Ross Bass in the Democratic primary while Albert Gore ran unopposed.  Bass upset Clement in the primary and went on to the general election where both he and Albert Gore faced Republican opponents.

The Republican Party in Tennessee was becoming a factor to be reckoned with; no longer was the Democratic nominee automatically assured of victory.  Republicans had won the Third Congressional district in 1962 when conservative Democrat James B. Frazier, Jr. lost the primary to Wilkes Thrasher, Jr.  GOP nominee Bill Brock had quietly gotten the support of many of Congressman Frazier’s backers and despite a campaign of supporting President Kennedy, Thrasher had lost to Brock.

Congressman Bass faced Republican Howard H. Baker, Jr. in the general election.  Baker was the son of the late Congressman Howard H. Baker who had died suddenly in 1963.  Baker’s stepmother, Irene, was the incumbent Congresswoman from the Second District, although she was not seeking reelection.  The younger Baker had an impeccable Republican pedigree and also happened to be the son-in-law of the Minority Leader of the United States Senate, Everett McKinley Dirksen of Illinois.

Albert Gore’s own opponent in the general election was Dan Kuykendall of Memphis.  Kuykendall was a Republican activist and successful businessman who would go on to serve in Congress from 1967 until 1975 when he was defeated by Harold Ford.

The two Republican candidates for the United States Senate ran not only credible, but active campaigns.  Unfortunately, they also had to carry the yoke of an unpopular Republican presidential nominee, Barry Goldwater.  The Arizona senator had suggested Tennessee could do without the Tennessee Valley Authority and that certainly didn’t help the Republican ticket in an area where the GOP usually ran well.

Both Senator Gore and Congressman Bass held on to the coattails of the popular LBJ.  Bass only narrowly defeated Baker, while Gore won by a more comfortable margin, but in losing Dan Kuykendall had won approximately 46% of the vote statewide.

By 1964, both John F. Kennedy and Estes Kefauver were gone.  The country, as well as Tennessee, was changing profoundly.  Lyndon Johnson stepped into the presidency and pressed his agenda, which was termed “The Great Society”, but Johnson also increased the American presence in South Vietnam, a fact which troubled Albert Gore.

Senator Gore had visited South Vietnam in 1959 and had been skeptical ever since.  Gore also disliked the authoritarian government of South Vietnam’s rulers.  Even though Gore voted for the Gulf of Tonkin resolution, he became a critic of the war.

Albert Gore would later say he considered his stand against the Civil Rights bill of 1964 as a mistake, but the truth is his position on that particular piece of legislation helped his reelection campaign.

President Johnson liked Senator Albert Gore little better than he had previously and likely wouldn’t have objected to Gore being defeated in a party primary.  Yet Johnson was one of the most astute politicians ever to sit in the Oval Office and he knew that the passage of the Civil Rights bill had changed politics for decades to come, especially in the South.  Johnson had admitted as much to one aide and he preferred Albert Gore in the Senate to a Republican.  Johnson’s campaign visits to Tennessee helped both Albert Gore and Congressman Ross Bass.

The 1964 election signaled a revival of Republican fortunes in the Volunteer State.  Howard Baker had quite nearly beaten Ross Bass and Dan Kuykendall had been almost completely unknown in Tennessee prior to the election.  Kuykendall came within fifty thousand votes of defeating Gore.

Gore had won a third six-year term, once again displaying his frenetic pace and making numerous speeches along the way.  Albert Gore’s independent populism had proved to be still popular with a majority of Tennesseans.

Yet within two years, Tennessee politics would change again and usher in an era of two party politics.  It would also serve as a warning to Senator Albert Gore for the future.