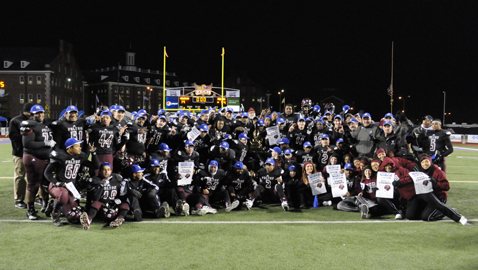 To lay claim to being Knoxville’s best high school football team since the playoff era began in 1969, Fulton would have to go undefeated.

“I think so,” said Rob Black, Falcons’ head coach, after his team wrapped up a practice session in UT’s indoor facility on Thursday night, Dec. 5, less than 48 hours before its state championship game against Giles County.

“I’ve heard a lot of people talk about that,” added Coach Black. “I’ve asked this team several times this year, ‘How are we going to be remembered? What’s our story going to look like at the end? What will people say about us 10, 20, 30 years from now?’ Still, a lot of that is unanswered, and I think a lot of that can be answered . . . with the outcome of this next game.”

The answer was punctuated with an exclamation point.

On a freezing cold and overcast late Saturday afternoon (Dec. 7), when the Bobcats from Pulaksi pulled to within six points of Fulton at the start of the second half in the TSSAA Class 4A title game, the Falcons responded like champions, scoring 34 unanswered points to pull away for an impressive 54-14 victory at Tennessee Tech’s Tucker Stadium in Cookeville.

It was Fulton’s first-ever undefeated state championship team and the sixth in Knoxville in 44 years to hoist a gold football after finishing with a perfect record.

What makes the 2013 Fulton squad extra special is how it dominated opponents throughout the season. Before its Mr. Football state honoree, running back Daryl Rollins-Davis, was sidelined with a leg injury 10 yards short of the 2,000-yard rushing plateau in a second-round playoff game against Sullivan South, the Falcons had outscored their 10 regular season opponents 612 to 57 and beaten Unicoi County 74-0 in the opening round of the playoffs.

The Falcons also did it against a tough schedule, which included three Class 6A opponents and one Class 5A foe. They overcame adversity with the injury to Rollins-Davis. They also took everybody’s best shot, including Catholic’s in a semifinal game that wasn’t decided until the closing minutes.

Last Friday, Coach Black said he’d heard “the best-ever talk” many times since the title game. “It’s a huge compliment from people out there who think that.

“This is a special team. I think (the compliment) shows a lot about who this team is and what they’ve accomplished.”

What will be said about this team in the future?

“Obviously, the state championship and 15-0 record,” said Black. “That’s what they’ll begin with … Then the number of athletes on this team … the speed of the defense and having so many people around the ball.

“And here’s a telling number about this team – We had 17 different players score touchdowns in various ways.”

Wide receiver/tailback Xavier Hawkins, who ran for two touchdowns and had two TD catches, was named the Offensive MVP in the title game. Linebacker Sidney Jackson earned the Defensive MVP award as he totaled 11 tackles (3 solo, 8 assists), intercepted a pass, recovered a fumble and had two tackles for loss.

Fulton capitalized on the first of five Giles County turnovers, recovering a fumble, and took a 7-0 lead in the opening quarter on Hawkins’ 1-yard run and Josh Coleman’s PAT kick.

Early in the second quarter, Lennox Roper stopped the Bobcats with an interception at the Fulton 15. Another interception, this one by Jackson late in the quarter, led to the first of four TD passes by Penny Smith, a 29-yarder to Hawkins.

KJ Roper hauled in a 47-yard touchdown aerial from Smith with 36 seconds left in the first half to make it 20-0.

Giles County didn’t quit. Quarterback Kenton Baker was a one-man show after halftime and scored on a 13-yard run out of the zone read attack. After a Fulton punt, Cameron Ordway broke a tackle and went 45 yards down the Bobcats’ sideline to cut the gap to 20-14.

But a huge play by Smith got the momentum back for Fulton. After sophomore Kentel Williams returned a kickoff 42 yards to the Bobcats’ 41-yard line, Smith, on a crucial 3rd-and-7, hit Domonique Williams over the middle for a 38-yard touchdown pass.

Giles County Coach Walt Smith said the Falcons’ senior southpaw stepped up and showed what kind of player he is on that play. The Bobcats had come with a blitz and Penny took one on the chin. But he still managed to throw a strike to Williams, who was heavily covered.

The clutch completion and score padded Fulton’s lead to 26-14 with 3:43 left in the third quarter.

Giles County went three-and-out on its next possession as Michael Scates recorded a tackle for loss, De’Ontay Tate sacked the quarterback and the Bobcats threw incomplete with Hawkins defending.

On the Bobcats’ next possession, Kenny Marsh pressured the quarterback and 5-8, 254-pound lineman Tony Gunn picked off a screen pass and hauled it back 30 yards for a TD. Fullback DJ Campbell’s 2-point pass to Smith surprised Giles County and made it 34-14.

Fulton’s defense continued to make big plays as a hit by Hawkins forced a fumbled, which was recovered by Jackson at the Bobcats’ 14. That led to Smith’s 10-yard TD pass to Hawkins on the first play of the fourth quarter.

Following a Giles County punt, Hawkins took a direct snap and scooted 68 yards down the sideline, right in front of a jubilant Falcons’ bench, to make it 48-14 with 10:11 remaining.

Hawkins’ breakaway reminded many Fulton fans of the season’s numerous blowouts. All that was lacking was a running clock for the mercy rule. It started ticking at 5:06, following a 22-yard TD run by Tate.

The final five minutes were used for subs to get in the game . . . and the Falcons to soak it all in and bask in the glory of what surely will become a most memorable season.