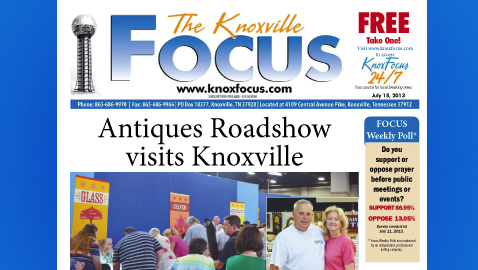 Click here to view the full Focus for this week.

Billed as part adventure, part history lesson, part treasure hunt, PBS’s primetime series Antiques Roadshow visited Knoxville this past weekend as part of an eight-city summer production tour. The all-day appraisal event was held in at the Knoxville Convention Center Saturday and was the Antique Roadshow’s first visit to Knoxville in its 18-year history.

“We are thrilled to be visiting Knoxville for the first time,” said Roadshow executive producer Marsha Bemko.

At the appraisal event, 5,000 to 6,000 ticketed guests received free valuations of their antiques and collectibles from specialists from the country’s leading auction houses and independent dealers. Each guest was invited to bring two items for appraisal. Participating in the local event were appraisers from the world’s leading auction houses, including Bonhams & Butterfields, Christie’s, Doyle New York, Skinner, and Sotheby’s, along with independent appraisers and dealers nationwide.

Among the participants were Greg and Sarah Lawson, owners of Fountain City Auction. Lawson was in the photography business for 22 years, but when he began attending auctions 12 years ago, he found a new passion in antiques and collectibles. He later turned it into a successful business.

The Lawsons brought an automaton for appraisal. The item originally belonged to Captain Peter Burbank, a relative of the Vanderbilt family, from Staten Island, NY. He gave the musical dome as gift to his housekeeper. The Lawsons purchased the automaton at a local estate from the woman’s great granddaughter.

“The Roadshow was very well organized. It seemed we were in and out of lines in no time at all,” Greg told The Focus.

As part of the visit, Antiques Roadshow also taped field segments in and around Knoxville, highlighting local history and places of interest. These segments took place at the Museum of Appalachia in Clinton, the Rhea County Courthouse in Dayton, and the McClung Museum in Knoxville proper.

From Roadshow’s visit to Knoxville, three episodes of television will be created for inclusion in Season 18, airing in 2014. Antiques Roadshow, Season 18, will air on East Tennessee PBS Mondays at 8 p.m.