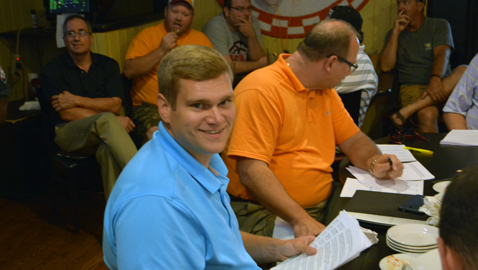 Tonight, the league begins its second summer at Catholic. In 2013, Christian Academy of Knoxville hosted games after Bearden was the venue for the first five seasons.

“Catholic is the best venue that we’ve ever had,” said league commissioner Andre Whitehead. “It’s air conditioned and the people at Catholic have been great.”

The league underwent a change this summer. No junior college or high school players are participating and that will allow college coaches to attend the games according to Whitehead.

“In the past, we’ve had Juco and high school players,” Whitehead said. “Those were all considered [potential recruits] by the NCAA so the coaches couldn’t attend.”

In addition, Tennessee had a coaching change when Rick Barnes was named the team’s third coach in three years and Whitehead did a bit of a selling job. Barnes was hired to replace Donnie Tyndall, who was fired after just one season due to NCAA violations at Southern Miss.

“[At Texas], he recruited talented [in-state] players and had a pipeline in Canada, I reached out to people who knew him and he came aboard.”

The coaches are now excited to get the season underway.

“This is a good time to get together with old friends,” said H3 Sports coach Scott Barron. “Catholic is a great facility. Now, it’s time to coach and find out what kind of talent you have.”

Game Time Lights coach Brent Watts returns for his eighth season in the league and he’s looking forward to defending his title.

“”I love the fact that I got Armani Moore,” Watts said. “This is an exciting time of year for me and I am the defending champion.”