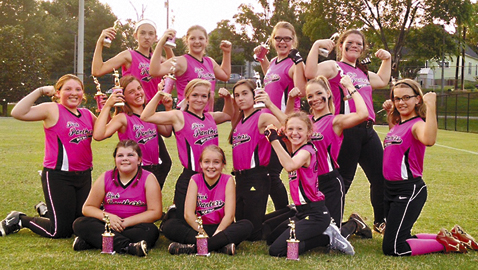 A joint effort by two recreation commissions – Holston-Chilhowee and Carter – made it possible for a group of 12-and-under girls to have a softball team this summer.

And what a team it turned out to be!

“Our team was made possible by a joint effort by the commissions of Holston-Chilhowee (Julie Townsend) and Carter (Jeff Cable),” explained Coach Ray Wynn via e-mail last week.

“Neither commission had enough players to field one softball team, so we were able to combine the girls who signed up at each park to make this team possible to give these girls the opportunity to play softball.”

“We had a roster filled with 15 players ranging from girls who have played for a few years and girls who had never played,” stated Wynn. “I was proud to see the improvements they made across the board.”

The Pink Panthers capped the special season with an 8-1 win over the Knoxville Falcons in the City 12U tourney finals.

Top honors in the City 10U girls softball tournament went to South Knoxville.