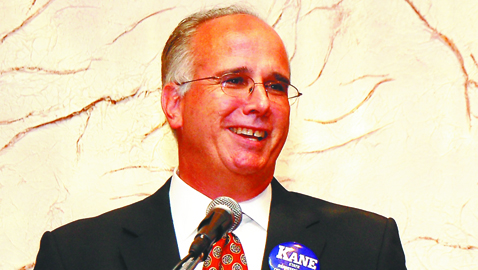 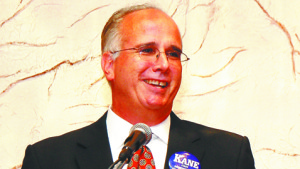 Roger Kane thanks his supporters during the Election Night celebration at the Crowne Plaza last Thursday. Photo by Dan Andrews.

Redistricting gave birth to the new 89th District and the best known candidate to fill the seat was former Knox County Sheriff Tim Hutchison. Several other candidates entered the primary and yet another prospective candidate tried in vain to get on the ballot.  The Republicans were always thought to have the advantage inside the 89th District and eventually four candidates competed for the GOP nomination: Hutchison, Roger Kane, William G. “Bo” Pierce, and Joey McCulley.  Shelley Breeding, a young attorney, tried to get on the ballot to run as a Democrat in the general election, but was unsuccessful due to residency requirements.

All of the Republican candidates have been around the edges of politics and government.  “Bo” Pierce was the long-time Director of the Knox County Housing Authority; McCulley’s father is a member of the Blount County Commission; and Kane made an unsuccessful bid for Knox County Trustee in 2008.

Once the most powerful and perhaps the most personally popular politician in Knox County, Tim Hutchison was seeking to comeback from a devastating defeat for the mayoral nomination, which he lost to then-State Senator Tim Burchett two years ago.  At his peak, Hutchison commanded the loyalty of thousands of Republicans in Knox County.  As Sheriff, Hutchison was pursued by The Knoxville News-Sentinel relentlessly, yet he was elected five times.

Tim Hutchison literally came out of nowhere to win election as Knox County Sheriff in 1990, defeating two-term incumbent Joe Fowler.  Hutchison quickly improved the department and put his personal stamp on just about everything.  Young, handsome, and exceptionally photogenic, Hutchison was enormously popular.  The Sentinel’s vendetta against Hutchison (somewhat reminiscent to its current pursuit of Mayor Tim Burchett) did little to damage his popularity.  In fact, one could argue it had precisely the opposite effect.  Harry Moskos, then-editor of The Knoxville News-Sentinel, exhibited a personal hatred for Hutchison while at the same time loyally supported Mayor Victor Ashe.  For years, politics in our community was divided between “city” and “county” factions and Tim Hutchison was at the top of the heap in county politics.

The apex of Hutchison’s county organization came when voters overwhelmingly rejected consolidating the city and county governments.  Yet Tim Hutchison frittered away much of his personal popularity with endless disputes and feuds.  Dissatisfied with the pace of a proposed Justice Center, Hutchison demanded control over the project and a subservient County Commission gave it to him.  It was also the death knell of the project, which was never built.

Elections were getting closer for Hutchison and more and more voters inside the City of Knoxville were voting for his opponents, but the Sheriff was still enormously popular in the outlying county precincts and his large majorities there kept him in office.  When term limits were enforced, Tim Hutchison’s reign as Sheriff came to an end.  His tenure ended in controversy, as he was due to receive a generous pension after voters had approved a defined benefits package for deputies.

Hutchison seemed not to realize his popularity had diminished and the continuous feuds had taken their toll.  He had publicly pondered whether his future lay in Congress or perhaps as the head of Knox County government.  Hutchison announced he would run for County Mayor and suffered a humiliating defeat with Burchett winning by a huge majority.

As Hutchison prepared for a comeback, many thought he would benefit from a crowded primary field.  The former Sheriff was better financed than Roger Kane, although Kane ran a more modern campaign. Hutchison plastered the district with billboards, always a staple of his campaigns.  Kane’s own campaign concentrated on robo-calls, mailers and radio advertising.  In the end, Hutchison’s liabilities were simply too much to overcome, along with Roger Kane simply running a better campaign. Kane won the Republican nomination with better than 42% of the vote.  Without a Democratic opponent in the general election, Kane will certainly go to Nashville and has an opportunity to make a difference.