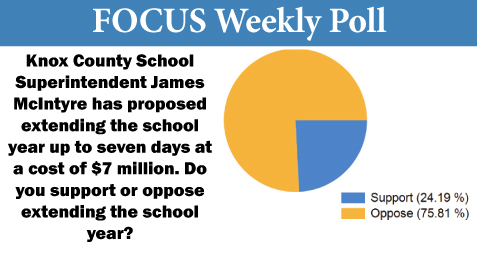 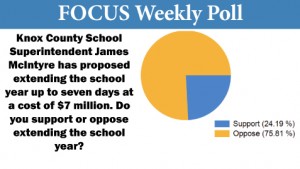 Once again, McIntyre’s policies are the least popular in the 8th District, closely followed by the 9th, which is South Knoxville and South Knox County and represented by Pam Trainor on the School Board and Mike Brown on the County Commission. Even in the 4th and 5th Commission Districts, McIntyre’s proposal is not popular. Extending the school year did get more support in the 4th District, which is Sequoyah Hills and points west, but it was only a third of the total. The 5th District, which is Farragut and surrounding areas, saw over 70% of respondents in opposition to extending the school year.

Recent polls have shown overwhelming opposition to increasing either the property tax or the sales tax and now McIntyre’s proposal to extend the school year.