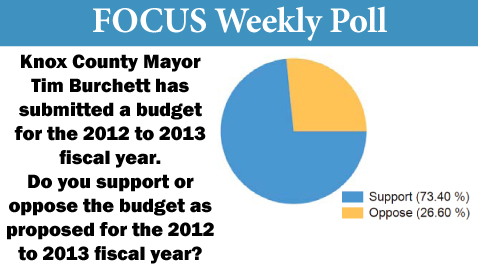 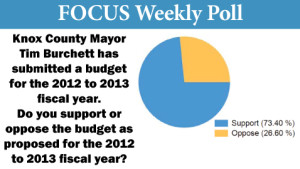 The Knoxville Focus polled just over 500 voters two months ago and asked the same question in this week’s poll: “Knox County schools Superintendent James McIntyre has requested $35 million in new revenue for the school system. This would require an additional 35 cents or 14.83% increase in property taxes. Do you oppose or support the tax increase?”

In stark contrast, the least affluent communities in Knoxville, the First and Second Districts also showed some movement, although not in favor of McIntyre’s tax increase. The First, which is primarily home to Knoxville’s African-American community, registered over 78% opposition to increasing the property tax. Two months ago, 77% residents of the First District were opposed to an increase in the property tax. Likewise voters in the Second District, which is largely a community of working class and retired folks, proved to be more solidly against increasing property taxes. Just over 79% of residents of the Second District are opposed to increasing property taxes, a jump from just over 75% two months ago.

The sales job done by McIntyre and his surrogates doesn’t seem to have worked in the Third District, which is comprised largely of folks inside the City of Knoxville, as are the First and Second Districts. Almost 83% of voters inside the Third District are opposed to increasing the property tax, a jump of nearly 5 points from two months ago when 77% of voters were opposed to increasing the property tax.

The number of people polled on both occasions is almost identical; that holds true even inside each of the districts. Not a single member of the Knox County Commission can vote for the property tax increase and truthfully claim he or she is representing the majority will of his or her constituents.

Several well-heeled individuals and the Chamber of Commerce realize the sales campaign by Superintendent McIntyre and his allies has failed to convince Knox Countians of the need to raise taxes for schools. So they have hired virtually every PR firm in town and a barrage of TV commercials supporting a tax increase are expected to start airing shortly, if they haven’t already. The purpose of the television advertising campaign is to prop up Superintendent McIntyre and convince Commissioners the political fallout won’t be as severe as they fear.

According to these polls, the vast majority of Knoxvillians and Knox Countians remain solidly against increasing the property tax.