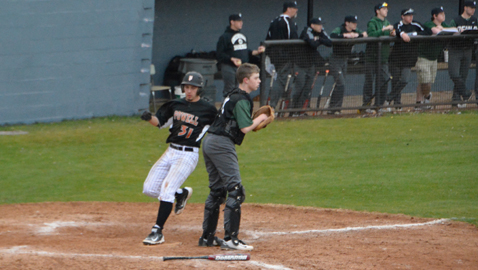 Photo by Dan Andrews.
Powell first baseman Peyton Alford scores a run in the Panthers’ 7-3 victory over Greeneville Wednesday night at Danny T. Maples Field. The win improved Powell to 2-3 on the season.

Powell High School baseball coach Jay Scarbro finally saw his squad put it all together Wednesday night and the result was a second victory in as many days for the Panthers.

“Tonight, we were finally able to get some clutch hits,” Scarbro said after Powell notched a 7-3 victory over Greeneville at PHS’s Danny T. Maples Field. “We started the season 0-3.

“We went 0-3 last week and now that we’ve won a couple of games, we feel a little better about things. This is a big confidence booster for us because Greeneville is a very good team. They’re probably the best team in their district.”

The Panthers (2-3) took a 1-0 lead in the bottom of the first. Riley Cooper started the modest rally with a one-out walk. He advanced to second when Joe Stucky flew out and took third when Cameron Payne singled.

The Panthers, who stranded a runner in scoring position in the second, scored two more runs in the third.

Cooper drew a leadoff walk to open the frame. He went to second on a single by Stucky and advanced to third on a sacrifice fly by Payne before making it 2-0 when the Panthers successfully executed a double steal. Stucky also swiped second on the play. He would score Powell’s third run of the contest when he scored on a hit by Jonas Payne.

The Greene Devils (4-2) pulled to within 3-2 in the top of the fourth inning.

In that frame with one out, Powell starting pitcher Levi Everett hit both Cody Hartness and Lincoln Bowman. Both would score one out later on a two-run double by Greeneville left fielder Augustus Fraley to make it 3-2.

Fraley’s double was Greeneville’s only hit off Everett, who had seven strikeouts and hit four Greene Devils.

“Levi Everett has been lights out for us,” Scarbro said. “He’s thrown well. He’s hit more batters than he’s given up hits.”

While Greeneville’s hitters couldn’t solve Everett, the Panthers had no such trouble against Shephard and reliever Caden Ramsey.

Ramsey, who moved from shortstop in the bottom of the fourth, surrendered three runs in his first inning on the mound, thanks to an RBI single by Cooper and a two-run double by Stucky that made the score 6-2.

Powell made it 7-2 on Noah Mallicoat’s single that plated Conner Sepesi, who singled to start the fifth inning and stole second.

After a scoreless sixth, Greeneville got a run in the seventh off Panthers’ reliever Matthew Fortner.