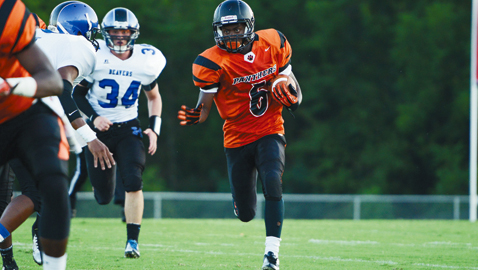 Photo by Eric Kennedy.
Powell senior running back Tyshawn Gardin (6 in orange) carries the football on Friday night as Karns’ Colby Huffaker (34 in white) chases from behind. Gardin played a huge role in the Panther’s 19-13 win over the Beavers as he gained 177 yards on 16 carries and scored a touchdown.

On paper this game wasn’t supposed to be close.

Powell was a team coming in off of an emotional win at CAK a week ago.  Karns was a team coming off of two straight lopsided losses, and suffered even more losses with injuries to starters that would prevent them from playing against the Panthers.

But as the saying goes, football games aren’t played on paper. They are played on the field.  And just as it has been so many times in recent years, this Battle of Beaver Creek 2013 turned out to be close to the end.

Defense was the word for both teams in the first half.

Powell had several scoring opportunities, but it just couldn’t cash in either because the Beaver defense came up with a stop, or Powell just flat stopped themselves with penalties and bonehead plays.

Karns had no opportunities to score in the first half, as the Powell defense held the Beavers to just 24 total yards of offense over the first 24 minutes.

The only scoring of the first half came on two Austin Rogers field goals for Powell – one from 30 yards with 3:19 to go in the second quarter, and then another at the 8 second mark, this time from 32 yards away.  Powell led 6-0 at the half.

The Panthers added to the lead a minute and thirty four seconds in to the second half when senior QB Hagen Owenby took the ball in from 3 yards away.  Powell went for two, but didn’t make it, and the Panthers now led 12-0.

Early in the 4th quarter Powell stretched the lead to 19-0 when Tyshawn Gardin went straight up the middle behind the jumbo package from 7 yards away.  Rogers’ kick was good, and it looked like Powell was going to pull away from the pesky Beavers with 10:20 left in the 4th.

Karns had other ideas, however.

Senior Blake Bowman received the ensuing kickoff at his own 10, and after an initial hesitation turned on the jets and headed down the sideline.  Ninety yards later he was in the end zone and the extra point kick by Kevin Ellis the score was 19-7.

From that point it was the Beavers who were the aggressors, continuing to gnaw at the Panthers.

Sophomore quarterback Greg Tye, getting his first start for the Beavers, directed his offense on a drive that culminated with a 13 yard pass to Matt Nauman.  Ellis again made the kick, and Karns had cut the Powell lead to 19-13 with 6:48 to go.

Karns interim head coach Travis Tipton opted to kick deep and hope his defense could hold and get the football back, and that is exactly what they did.  Karns forced a bad Powell punt and started on one final drive from the Powell 38, one that the Beavers hoped would result in a touchdown and extra point and a huge upset.

Tye led the Beavers down the field, and had a first and goal at the 3 with under 2 minutes to go.  Trying to be too exact and not leave much time on the clock backfired, as Karns was called for a delay of game penalty.  That pushed the ball back to the 8, and then a sack and another delay of game pushed Karns even further away from the goal line.  On fourth and goal from the 15 with just six seconds to go, the Beavers were either going to score a touchdown and have a chance at the win, or Powell’s defense was going to make one final play and hold on to the win for themselves.

Nye took the snap and rolled right looking for an open receiver in the end zone.  Nye lost the handle, however, and a wild scramble for the football ensued.   Players from both teams fought for the football, and as the whistle blew the clock showed no time left and Panther football.  Powell held on to a hard fought 19-13 border rivalry win over Karns.

“I credit Karns for coming in and playing a whale of a game”, Powell Head Coach Tobi Kilgore told me after the game.  “Our guys made a ton of mistakes again tonight, but a W is a W.”

For the second week in a row Gardin had a big night running the football.  Against the Beavers he carried the ball 16 times for 177 yards and a touchdown.  Owenby added 78 yards on 21 attempts, also finding the end zone on the ground.

Powell amassed 366 yards of total offense to Karns’ 115, but it continued to shoot itself in the foot time after time when getting in to scoring position.

“We can’t continue to do that and be successful against teams in this district”, Kilgore said.  “We’ve got to find a way to eliminate those fixable problems.”

With the win Powell goes to 2-1 overall on the year, and 1-0 in District 3AAA play.  The Panthers will enjoy an open week and travel to Knoxville Central on September 20.

Karns is 0-3 and 0-1 in 3AAA.  The Beavers will host Knoxville Central this Friday.

Just because Powell is off this week doesn’t mean that we won’t have high school football on AM 620 WRJZ.  Our crew will be in Seymour to bring our listeners the broadcast of the Jellico at The King’s Academy game.  Former Powell head coach Matt Lowe is now the coach at The King’s Academy.  Air time on Friday is 7 p.m.

Bill Mynatt is the Radio Voice of Powell Panther Football on AM 620 WRJZ.