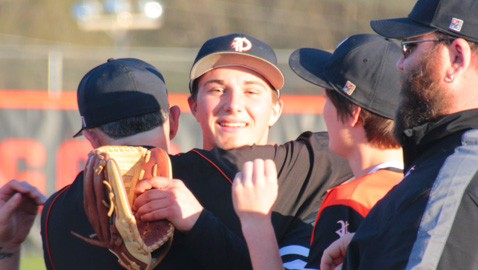 PHOTO BY KRISTY TETER OF KT PHOTOGRAPHY
Peyton Alford gets a hug from Powell High head coach Jay Scarbro as the Panthers celebrate the junior southpaw’s perfect game in a 3-0 win at Clinton last week.

“I was pretty much hitting my spots and had good velocity,” said Powell High School’s junior lefthander last week, recalling the perfect game he recorded in a 3-0 win at Clinton on March 23. “The big thing was my teammates behind me. Without them, I wouldn’t have had it.”

One defensive play, in particular, came to mind.

“There was a ground ball to shortstop,” said Alford. “He had to backhand it and threw a little high, so the first baseman had to jump and tag the runner out.

“That (the swipe tag) was a really good athletic play by the first baseman, and that was his first game this year playing first base for us.

“It saved it for me. I went and gave him a big, old hug after that.”

Another close call – a 3-2 count — occurred in one of the late innings, “and I was pretty nervous,” said Alford, but he retired the batter.

Powell teammates also upheld the baseball tradition of not uttering a word about a no-hitter, or in this case, something even bigger than that.

“I could tell the guys knew something,” said Alford, “but they were being good teammates and weren’t saying anything … thank goodness.”

Powell skipper Jay Scarbro got drawn into the drama as well.

“In seven years as a coach and four years as a player, I had never seen a seven-inning perfect game in high school baseball,” he said. “It was pretty amazing.

“I’ve seen a few on TV, but that was just the highlights. I’ve never personally seen one, so it was a pretty big deal for me.”

Scarbro became really aware of what was unfolding before him in the fifth inning. “After that, it became a real focal point for me,” he said.

It didn’t affect how Scarbro managed the game. “But I did become eager to try to get the ball back in his hands. He had everything working right.”

The Panthers scored all three of their runs in the top of the first inning. After that, the scoreless innings went by quickly for both teams.

“It ended up to our benefit to get him back on the mound,” said the Powell skipper.

“As it was about to take shape at the end of the game, everybody sort of worked their way out of the dugout. They were ready to go out there and congratulate him.”

Alford said his curve ball and change-up were working really well in the District 3-AAA game and he went with those pitches early in the count most of the time, and then finished up with fast balls.

His fast ball clocks around 84 to 85 miles per hour.

Alford comes from a “baseball family.” Older brother Tyler currently is a senior catcher at Cumberland University in Lebanon, and younger brother, Taylor, is an eighth grader on the Powell Middle School team.

Peyton primarily plays first base when he’s not on the mound and also is the Panthers’ leadoff batter.

“He does a good job for us where ever we put him,” said Coach Scarbro. “He’s been our No. 2 pitcher since he first walked in the door of our school. He threw our second district game the first week of his freshmen year and since then he’s been one of our top two or three pitchers.

“He pitched in our regional game and sub-state game last year. He’s been a key guy for us all along.”

And one day he was perfect.