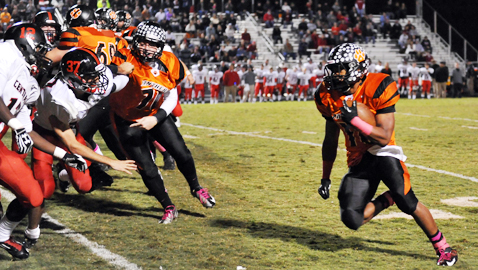 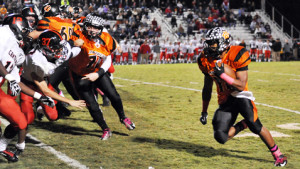 Powell running back Montario Washington (in orange with the football) cuts off of a team mate’s block towards the end zone on Thursday night. Washington’s 3 touchdowns helped propel the Panthers to a 20-0 Senior Night win over Central, and put the wraps on a 9-1 regular season. Powell will be at home for the first round of the playoffs on November 2. Photo by Eric Kennedy.

By Bill Mynatt
Radio Voice of Powell Panther Football on AM 620 WRJZ
PowellFootballRadioVoice@yahoo.com
Just as it has all season long, the Powell defense rose to the occasion on Thursday and pitched a shutout in the Panther’s 20-0 victory over Central on Senior Night 2012. Twenty Powell seniors played their last regular season games on the grass surface of Hayworth Field at Scarbro Stadium. And what a senior class it has been!
In their three varsity seasons, the senior class current holds a 34-3 overall record. They have not lost a regular season game at home, and they likely wrapped up a third consecutive #1 seed in the Class 5A playoffs. Powell has week 10 off, and then will prepare to host the first round when the playoffs begin on November 2. Playoff brackets will be released by the TSSAA next Saturday morning (October 27).
“We certainly believe that we’ve earned a one seed, but with the way it has gone in the past you just never know”, Powell head coach Derek Rang told me after the game. “Heck, I’m a math teacher, but I still can’t figure it out”, he said with a chuckle.
After losing 16 starters from a 14-1 team that finished as the state runners up in class 5A a year ago and seeing the head coach in Matt Lowe that got them there resign in February, few thought that the Panthers would be in this position again so soon. Rang, however, modestly refused to accept the credit for the 9-1 season in his first as a head coach.
“Coach Lowe did a great job of setting things up here, and the assistant coaches and the players did most of the work.”
Maybe so, but Rang’s leadership and steady demeanor certainly played a huge role in the process, as well. He deserves a huge amount of credit for the program’s continued success.
Things didn’t look so great from the start on Thursday, however.
Central won the coin flip and chose to defer to the second half. After the Panthers received the kickoff, near disaster struck as the kickoff was mishandled, and then a bad snap forced Powell to punt from its own end zone. The Bobcats looked poised to take the lead early as they had first and ten on the Powell 38. The Panther defense kept Central out of the red zone, however, and the Bobcats turned it over on downs.
In the process, Central’s outstanding junior running back JaJuan Stinson suffered a leg injury. He would not be able to continue to play in the game.
With Stinson on the sideline, the Panther defense controlled the line of scrimmage, keeping the Bobcats bottled up the rest of the night.
Offensively Powell was led by junior QB Hagen Owenby and senior running back Montario Washington.
Owenby put up the numbers – 17 carries for 172 yards – and Washington put the ball in to the end zone three times. The first came on a 26-yard reception from Owenby at the 6:36 mark of the first quarter that put Powell up for good.
Before the first half would be done, Washington would also score on runs of 1 and 14 yards. Austin Rogers was good on 2 of the 3 point after attempts, and Powell had the lead 20-0 at the half.
With the lead well in hand, the Powell defense took things upon its collective shoulders to bring home the win in the second half, and it was appropriate on this senior night that two seniors would lead the charge.
Defensive end Shar’ron more continued his superb play with another solid night, registering 11 tackles, 2 for loss, and 2 sacks. The two sacks moved Moore further up that record list at Powell. He is now in second in single season sacks with 11 – 3 behind Justin Galyon’s 14, and he is now tied with Will Barnes for the career lead with 17. Playoff games count towards season and career records, so Moore has an opportunity to own both records before his career at Powell is over.
Linebacker Devin Scott also continued his terrific season, making 14 tackles – 3 for lost yardage – against the Bobcats. Scott’s play was certainly noted by his head coach.
“I don’t care what anybody says, Devin Scott is one of the best linebackers in the region, if not the entire state”, Rang told me. “He’s a sideline to sideline guy who just knows how to play defensive football.”
Junior Dalton Long also had a solid game, stepping in to the starting lineup for an injured Cody Reed. Long made 8 tackles for the Panthers.
The win stretches Powell’s win streak over the Bobcats to 6.
With Week 10 of the season off, the waiting game begins to find out if Powell will be placed in Quad 1 or Quad 2. Either way, expect a one seed for the Panthers.
For Central, with five wins already they are likely in the playoffs as an at large team. A win this Friday night over Halls would most certainly cement that bid. The job Bobcat head coach Joe Hassell and his staff have done this year has been impressive, and especially when you consider the 0-3 start of the season.
Playoff games kick off at 7 p.m., instead of 7:30 as regular season contests do. That means that air time for the radio broadcast of Powell’s first round game on AM 620 WRJZ and streaming at www.powellpanthersfootball.com will be 6:30.