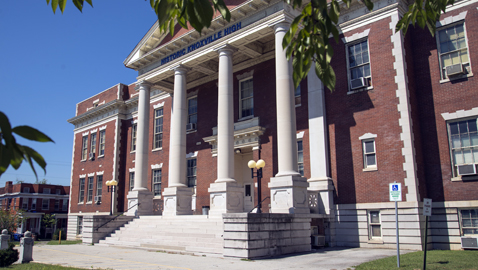 The Knox County Commission will receive a proposal Monday that recommends that Family Pride Corporation of Loudon be awarded the bid for Old Knoxville High School. Family Pride’s president, Rick Dover, has remodeled and repurposed several Loudon, Lenoir City, and Knox County schools, including Oakdale Elementary, for assisted living facilities and multi-purpose use. The firm is currently working on renovations of a former hospital in Loudon and the Alexander Inn in Oak Ridge.

The recommendation now goes from the mayor’s office to County Commission and will apparently be discussed in the commission’s work session Monday, October 21st.

The high school was built in 1910 and closed in 1951. It has since been used for administration, storage of records, and adult education.

Family Pride’s proposal calls for restoring the school within historic guidelines and keeping and maintaining the Doughboy statue that stands in front.