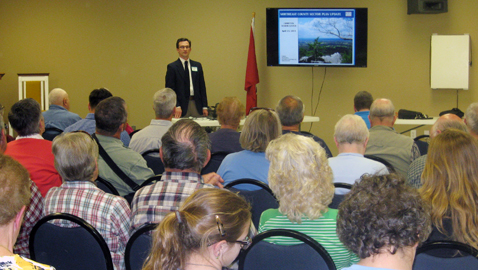 Thursday night the Knox Co. Metropolitan Planning Commission hosted a public forum at the Corryton Senior Center to update citizens on its Northeast County Sector Plan, which was originally put forward in 2003, but has been updated. Bryan Berry, Research Associate with the MPC, made the presentation, which lasted about 20 minutes. In the presentation, Berry informed citizens on what a sector plan is, how the county has changed in a background report, what the timeline is for proposed changes, and ideas for transportation, community facilities and land use. Local residents addressed their concerns to Berry about the sector plan and the proposed growth and development uses following the presentation.

In his presentation, Berry provided some background information in on how the Northeast County Sector, which encompasses Corryton, Harbisons Cross Road along Emory Road, Gibbs, Mascot and Ritta has changed since the original sector plan was proposed in 2003. Berry said a sector plan recommends policies to address development opportunities and issues, recommends land use types or zoning changes in appropriate locations, and recommends guidance for appropriate development. Berry covered how the Northeast Sector has grown and changed.

In general, some things that can be done to improve communities are widening roads, improving parks, building schools, improving sewer management, etc.

In the public comments section of the program, one resident asked Berry if he believed a Gibbs Middle School would boost the local economy. “Yeah, I do,” replied Berry. “I think the potential in adding a middle school, particularly in close proximity to where the elementary and the high school is, would be a draw for residents to move to this area,” he said. “To what degree, I don’t know. I wouldn’t speculate on it,” Berry added.

Other citizens voiced additional concerns.  One of those citizens, Jack Walker, a resident of Northeast Knox County for 40 years, expressed his concern over some of the transportation details and narrow roads.

“I own a business, I’ve got a farm off Emory,” Walker said. “You have to stay over the center line to keep from dropping off in the ditch, because there’s nothing there. You drive up through there and see all this pavement already broken off, because of equipment going up there, the ditch is just under-bedding underneath the pavement, so the pavement is dropping off into the ditch,” he said. “What would really get a response is to send the bills for repair to the state,” he said.

“Keeping this a rural community, I’m for that 100 percent,” Walker added. “But the businesses that are already here, need some help.”

“We’re not opposed to some growth,” he stressed. “We want to keep it the rural, quiet community.”

Another concerned citizen, Rebecca Longmire, former Gibbs’ school teacher and Chair of the Metropolitan Planning Commission, said she favors keeping the area a rural community as well. Longmire lives in Corryton. Longmire said of the Corryton area, “We would like to maintain that rural area, which we can do as long as sewers don’t come in. Once sewers start coming in, you get a lot more development. We need to work ways to develop it responsibility.”

Longmire also talked about the need for parks to grow and recreational opportunities to expand. “The community park is very under–utilized,” she said. “We used to have church league ball, there’s nothing happening there (at the community park). A lot of people like to come out here, which is why we desperately need bike lanes because the roads are narrow.”

“It’s possible to maintain your rural integrity and still have opportunities for employment,” Longmire emphasized.

Berry explained a little bit about what the Metro Planning Commission does. “MPC does land use planning for Knox County,” he said. “We’re also the agency that administers the zoning board amendments and the subdivision regulations for Knoxville and Knox County,” he added.

Berry talked about an impression the public meeting left on him following the meeting.  “I think a lot of people enjoy the rural character and the agriculture heritage of this area,” Berry said. “They’re not opposed necessarily to growth and development but they want to preserve the reasons why they live out here.”

For more information or to take a survey, citizens can go to www.knoxmpc.org/northeastcounty/index.htm.