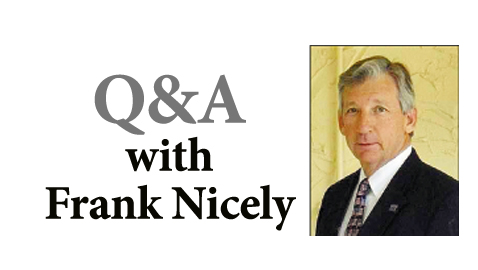 Frank S. Nicely serves in the Tennessee House of Representatives, representing District 17 which encompasses parts of Knox County and the majority of Jefferson county. Questions were asked by Focus writer Tasha Mahurin.

1.             Following the horrific tragedy at Sandy Hook Elementary School in Connecticut, you were among the first to address the need for improving safety in Tennessee schools. What was your initial reaction to the tragedy? Were you previously aware of the need for increased security in our school systems?

Like all Americans, as the details of the Newtown massacre unfolded I was shocked and horrified. Innocence lost is something that can never be replaced. Here in our area we have been touched by similar tragedies on a smaller scale at the Unitarian Church, as well as our schools. I have been aware of the dedicated efforts by Sheriff J.J. Jones and the KPD in strengthening security in Knox County where sufficient resources exist to do the job. But, while affluent, Sandy Hook is a remote rural area and I began to reflect on my new Senate District. Most have SRO officers in High Schools, some in high schools. Many systems were saying we’d like to step up security, but resources are limited and many schools weren’t designed with limited access in mind. The lesson of Sandy Hook is that no school is immune to an attack. Those teachers and staff acted bravely and unselfishly giving their lives for their students. I have no doubt every Tennessee teacher would do the same. It is up to us to make it as least likely as possible that they ever need to.

2.             You’re in the process of drafting legislation that would require a school resource officer or a comparably trained staff member in every Tennessee school, as well as requiring firearm training for faculty. Could you explain your proposed plan to our readers in greater detail?

My proposal is NOT aimed at arming teachers, nor requiring staff firearms training. Simply stated it does two things: sets the requirement that every K-12 school have security; and establishes the training standard for security officers. There will be a provision that gives rural and small systems flexibility beyond the traditional SRO officer in meeting the security standard, but certainly not the training standard. This proposal DOES NOT extend concealed weapon handgun permits into our schools. I have a strong belief that there is a major difference between self-defense and defending others.

3.             I was surprised to learn that there, in fact, is not a school resource officer assigned to every Tennessee school. Could you explain why this is currently the case, and why, given a significant increase in school related violence over the last decade, this issue has not been previously addressed?

The biggest obstacle has been and will continue to be dollars. Money is tight at both the state and local level. Unlike Washington, we can’t just go out and print money. But, I do believe the NRA proposal, which does basically the same as my proposal is erroneously aimed at a large federal program. States and local government offer the better solution in flexibility and efficiency.

4.             It is estimated that placing a resource officer in every Tennessee school comes with a $56 million dollar price tag? Can taxpayers afford this legislation and how would it be funded?

The $56 million dollar estimate is based on 1,800 schools needing coverage. Already we have nearly half of our schools covered, so that gets us down to $28 million. If we assume a 50/50 match between state and local we are down to $14 million and the state already funds $5 million per year in safety grants. So, from the state we are going to be somewhere between $10 million and $20 million as a safe estimate.

The local portion is exactly why we need to build in flexibility and I would suspect some funding component similar to the BEP formula to compensate for local systems’ funding ability. That’s one option that has been tossed out.

5.             Gun control is a politically charged, socially sensitive issue. What sort of response have you received since making the recommendation for this measure?

Very Positive from parents, teachers and school administrators in my District.  There are a few people that are horrified that we would consider any armed person in schools, saying that an armed policeman would scare the children or cause parents concern. I happen to think we need more positive interaction between our kids and law enforcement officers. And in many cases these SRO officers have proven to be positive influences and have saved lives in Tennessee. I also have firmly placed in my mind that this is a school security issue, and not a 2nd Amendment issue. It is a positive, measured plan to enhance the safety of our schools. In fact, in every place we compel citizens by law to attend (courthouses, DMV, etc.) are guarded, except our schools. We require attendance at schools so it is our responsibility to keep them safe.  By the way, I’ve created a facebook group:  Secure our Schools to post information about my plan and to share ideas on how to improve my proposal. I’d invite everyone to check it out and join in the discussion.