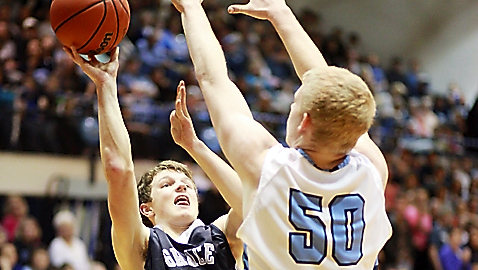 Kara Mckamey Photography. Grace Christian Academy’s Kobe Kelley works to get a shot off over a Hampton defender during this season’s Class A state sectional action. Playing on the road in a boisterous environment, the Rams notched a 71-65 win to qualify for the TSSAA state tournament.

A lot of basketball games were won by Grace Christian Academy this past season, and it wasn’t just the boys high school team, which advanced to the TSSAA state tournament, that was successful.

Grace Christian’s girls (23-10) set a school record for victories, swept District 3-A titles and also captured the Region 2-A championship without a senior on their roster.

GCA freshman standout Sydney Duggins was named Most Valuable Player in the district and region tournaments. She scored 19 points to lead the Lady Rams past Midway 49-35 in the district championship game. After the Grace girls notched their first-ever win in the region tourney, they went on to beat Oliver Springs 48-38 in the finals with Duggins’ 16 points leading the way. Their tourney run ended with a 45-25 loss to Hampton in the state sectionals.

Duggins, Hensley and D’Anna Johnson earned All-District 3-A regular season honors. Katherine Griffith joined those three in being named to the district and region all-tourney teams.

GCA’s Ben Andrews was named the Most Valuable Player in the ET sectional and teammates Chase Kuerschen, C.J. Gettlefinger, Connor Arnold and Benjamin Conner made the all-tournament team. In winning the district, Kuerschen was MVP and Andrews and Arnold received all-tourney recognition.

Mercer’s Rams put the cherry on top by advancing to the state tourney in Murfreesboro, where they saw their second-half comeback bid come up short in a 54-46 quarterfinal loss to Richland.

“This team probably went further than most expected,” said Mercer. “We only had one senior. I think we peaked at the right time.”

Grace earned its trip to the state by winning on the road in the state sectionals.

“They just played their guts out,” said Mercer, recalling the 71-65 victory at Hampton, a small upper East Tennessee school long known for its basketball tradition, which includes a 1960 TSSAA state title.

“It was a Hoosiers-type atmosphere, very intense. But our guys were used to it.”

The Rams also had played in boisterous environments in district and region tournaments. After winning the District 3-A regular season title, they lost to Harriman 71-51 in the district tourney finals at Midway. They also lost to Wartburg 79-71 in the Region 2-A tourney finals at Harriman, which forced them to have to travel for their sub-state contest.

Shooting guard Trey Stewart was Grace’s lone senior and the team’s leading scorer for the season, averaging 16 points and five rebounds. He is expected to sign with Bryan College, said Mercer.

Luke Shepherd, a 6-1 post/forward “with guard skills,” according to his coach, averaged 20 points in post-season play, and Mercer believes he could be in the running for Sophomore of the Year honors.

“I felt called to be there,” said Mercer. “He has confirmed that call many times.”

About a week after coming to Grace, news hit that GCA was being put on probation by TSSAA and that meant Mercer’s team would be ineligible for post-season play for two years.

“I was disappointed, but we would move forward,” recalled Mercer.