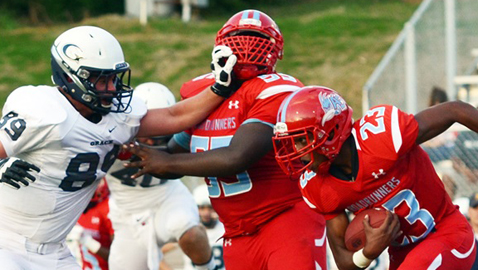 GCA senior workhorse Kyron Inman’s diving 21-yard touchdown reception just inside the pylon late in the first quarter looked like it would be the only score of the night until the Rams took advantage of a short field and tacked on a score with 1:26 remaining in the game.

Senior running back Cameron Kuerschen tallied from 3 yards out after the Roadrunners turned the ball over on downs at their 16-yard line. Skyler Sexton added his second PAT kick for the final margin.

Fumble recoveries by sophomore Shannon Cozart and senior Devante Johnson gave Austin-East scoring opportunities in the first half, but the Grace defense allowed only one first down each time and nothing more.

Grace Christian Coach Randy McKamey said putting the ball on the ground was “unacceptable, and I take full responsibility for that. We’ve kind of dropped our guard on ball security.”

McKamey said his team will have to work harder on carrying the ball “high and tight” in practice.

“That can’t happen against a good football team like Austin-East,” he said. “It will definitely cost us as we move on, if we don’t correct it.”

“Our defense played well, and did exceptionally better in the second half. Our coaches made some adjustments up front because they were gutting us early on some of those draws. We totally shut that down in the second half and kept the quarterback in check.”

Grace Christian’s first-quarter scoring drive covered 93 yards in 12 plays. Kuerschen had runs of 13 and 16 yards in the march and junior QB Jimmy Clevenger had a key 9-yard gain. An encroachment foul by the A-E defense on 4th-and-2 gave GCA a first down at the Roadrunner 36.

A 15-yard run up the middle by fullback Tyler Beck proceeded Clevenger’s TD pass to Inman with 33 seconds remaining in the first quarter.

“I’m proud of our defense,” said second-year A-E Coach Jeff Phillips. “They played hard and gave a lot of effort and that’s all I can ask. They gave us numerous opportunities to score and showed us they can be a dominant defense.”

In regard to his team’s offense not capitalizing on Grace Christian’s fumbles, Phillips said, “We made some mistakes as coaches and we’ll get better as coaches. We’ll practice harder and execute better. It all just comes back to practice.”

Despite the loss, Phillips, whose team was 1-9 last year, saw encouraging signs.

“The passion for the game has come. A lot of our seniors kept their heads up, knowing it’s a long season and knowing Grace is a good team and will probably make another run in the state playoffs this year.

“I think it gave us some confidence. The kids know we can have a dominant defense. Now we’ve got to find our answers offensively.”

McKamey said he and his staff knew coming into the game A-E was much improved.

“They are very sound defensively, and I think they’re going to play Anderson County tough next week, too.”

Grace Christian will host Kingston this Friday in its home opener.