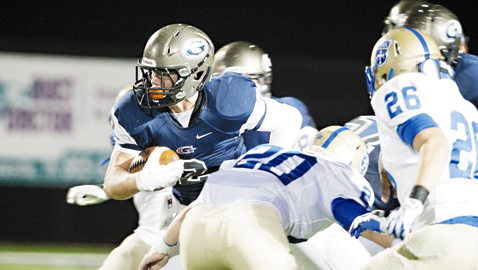 PHOTO BY KARA MCKAMEY
Grace Christian Academy’s Cameron Kuerschen rushes for yardage against rival CAK in 2013. The Rams’ senior tailback will be a key offensive weapon for Grace this season.

The goal hasn’t changed for Grace Christian Academy’s football program. The Rams will be trying to capture that elusive state championship in 2014.

“Really for us, the only thing we’ve not done is win a state championship, and that’s our goal,” said head coach Randy McKamey, who is coming off a second Class 2A semifinal appearance in five years.

They’ll just be going about it a little differently

Grace’s offense last season featured quarterback Devin Smith, who is now a preferred walk-on at the University of Tennessee. He passed for 3,031 yards and 29 touchdowns his senior year.

This season senior tailback Cameron Kuerschen (5-11, 205) and senior running back Kyron Inman (5-8, 195) are expected to lead GCA’s offensive backfield, which Coach McKamey believes is the strength of the team.

“Cameron is an unbelievable athlete and a great leader on and off the field,” said McKamey. “He’s a guy that’s going to be a difference maker on Friday night.”

Inman, like Kuerschen, also will be a linebacker on defense.

Nathan Pettit, a 5-9, 150-pound junior, also will contribute in the Rams’ attack and McKamey is looking forward to seeing what senior Kobe Kelley, a 6-1, 175-pound receiver and defensive back, will do in just his second football season at Grace.

“He was a basketball player and converted out to football.,” said McKamey. “Last year was really his breakout year.”

The development and production of the offensive line will be a key.

“Clay Keaton is one guy we’re really counting on,” said McKamey. “He’s 6-foot-7, 280 pounds and he’s got to grow up and be tougher. He did a great job for us last year, but we’re expecting more out of him.

“Our offensive line has to continue to come together. We’re a little thin there, but our five that we’ve got can play with anybody.”

In the quarterback battle, Jimmy Clevenger, a 6-foot, 160-pound junior, “got the nod” over senior Brady Moyers (6-1, 155) in spring practice and has been maintaining it.

“Brady has done a great job in our past scrimmages and is chasing him,” said McKamey. “It’s a good, healthy competition. I’ve never had the luxury of having two quarterbacks.”

The GCA coach also pointed out what a “big difference” Skyler Sexton can be in the kicking game. The 5-10, 210-pound senior came on strong last season and now regularly sends the ball into the end zone on kickoffs.

“That will give our defense a great opportunity,” McKamey said. “You make a team go 80 yards, it’s going to be tough.”

Sexton also will punt in addition to handling all phases of the kicking game.

McKamey, who started his head coaching career at Grace after being an offensive coordinator at Clinton, Oliver Springs and Anderson County, has a 66-15 won-loss record in seven seasons. Last year’s team was 12-1 after the 34-27 loss to eventual state champion Trousdale County.

As for this season’s race for the playoffs, McKamey said “our region opponents are just as tough as ever” and Trousdale County “is going to be good year in and year out.”

The Rams’ first order of business, he added, is to take care of business on their end of the state, and “get that first-round bye if we can.”

Grace Christian’s season opener will be at Austin-East Aug. 22.