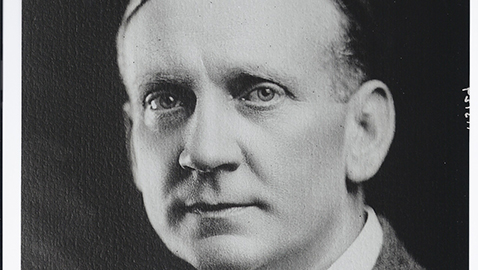 General Lawrence D. Tyson of Knoxville had officially kicked off his campaign for the Democratic nomination for the United States Senate in Trenton, Tennessee.  The General spoke before a crowd estimated at 5,000 persons.  Tyson flayed the incumbent, Senator John Knight Shields, as well as criticizing the record of the third candidate in the race, former Tennessee Supreme Court Justice Nathan L. Bachman of Chattanooga.

Lawrence D. Tyson’s military ties did him no political harm, while John Knight Shields’ refusal to back Woodrow Wilson and the League of Nations did him no good.  Democrats in Henry County, many of whom were veterans, endorsed Tyson’s candidacy while at the same time denouncing Senator Shields.  The meeting in Henry County was presided over by the Reverend P. P. Pullen, a Confederate veteran; many others had served under the General in France during the First World War.

While campaigning in Kingsport, Tennessee, General Tyson gave much the same speech as his campaign opener in Trenton.  Tyson did apparently score points with the women in the audience when he stated he was for strict adherence to temperance laws, as well promoting the rights of women.  The women folk of Tennessee had only been voting since 1920 and had become an important constituency in the state.  Senator Shields had alienated many female voters by his stance against women’s suffrage.  Unlike his colleague Kenneth D. McKellar, John Knight Shields had argued voting rights for women was an issue for individual states to consider.  Senator Shields did not believe the federal government should dictate to the states.  McKellar had been an avid supporter of voting rights for women and employed a woman as his chief of staff in his Washington office.  The position taken by John K. Shields was hardly unique in Tennessee; notably Congressman Cordell Hull had taken precisely the same position as Shields, as did, at least initially, former governor A. H. Roberts.  Interestingly, both Roberts and Hull had lost elections in 1920 to Republican challengers.

All three of the candidates for the Democratic nomination for the United States Senate, John K. Shields, L. D. Tyson and Judge Nathan Bachman, participated in a program on international affairs in Knoxville sponsored by the women voters of Tennessee.  Judge Hugh B. Lindsey, a candidate for the Republican nomination for the U. S. Senate, was scheduled to participate as well.

By the end of May, Senator Shields had returned to Tennessee from Washington and immediately met with leaders to confer about the campaign.  The news could not have been altogether pleasing to the senator, as it was obvious General L. D. Tyson’s bid was picking up steam.  It seemed Shields was keeping a rather low profile, as the senator did not bother to attend the Tennessee State Democratic Convention in Nashville.  His junior colleague, K. D. McKellar, attended, as did former governor Benton McMillin, former governor and U. S. senator James B. Frazier, and incumbent governor Austin Peay.  The absence of Tennessee’s senior senator did not go unnoticed.  Robert P. Williams, clerk of the city court of Knoxville, had been attending state Democratic conventions since 1890 and wondered why Senator Shields was not there.  “I was asked by many of the delegates as to the whereabouts of Senator John K. Shields,” Williams said.  “He was in the city but did not attend the convention.  I told them that the senator would have to answer that question for himself.”  Williams added, “I was afraid he would be embarrassed when they indorsed [sic] Woodrow Wilson and the League of Nations.  At any event, he was conspicuous by his absence.”

With the state convention over and the beginning of June, the real campaign for the senatorial nomination got under way.  General L. D. Tyson, hearty former soldier that he was, kept anything but a low profile, crisscrossing the state in search of votes.  Tyson agreed Senator Shields’ opposition to the Wilson administration and American entry into the League of Nations resonated with Tennesseans.  “Senator Shields’ vote against the League of Nations,” Tyson said, “is the principal thing he must explain to the voters of Tennessee.  It was his opposition to the League that brought to light his other activities against President Wilson.”  The state convention duly endorsed the League of Nations, which was an implicit rebuke to Senator Shields.

When asked for comment about the actions of the state Democratic convention, Senator Shields snapped he had none.

General Tyson organized his campaign in Shelby County and the presence of veterans was impossible to miss.  Tyson’s local campaign manager, Colonel W. L. Terry, was also a veteran of the First World War.  Confederate veterans abounded in Memphis and General Tyson proudly recounted many of the gray-haired veterans of the Civil War were active on his behalf.  Tyson noted with satisfaction he was expected to carry West Tennessee and was confident of his chances in East Tennessee.

Senator Shields was also catching fire from Judge Nathan Bachman.  Speaking in Winchester, Tennessee, Judge Bachman had been greeted at the train station by numerous citizens and was escorted to his hotel by a marching band from his native Chattanooga.  In his speech, Bachman charged John K. Shields had betrayed not only Tennessee, but also the entire South when the senator “broke from the ideals of Woodrow Wilson.”

“He is now a candidate before the democracy of Tennessee,” Bachman cried, “and asks that democracy for its indorsement of his course as the bitter antagonist and foe of Woodrow Wilson, and as the open and avowed ally of Senator Henry Cabot Lodge of Massachusetts.”  Bachman did not dwell entirely upon the perfidy of John K. Shields, but in a lengthy oration, the judge landed on several issues important to Democratic constituencies, including women, small business and farmers.  Like General Tyson, Bachman pledged he would support American participation in the League of Nations.  Bachman told his audience he was opposed to unrestricted immigration by aliens and defended himself from charges made by General Tyson for his failure to enlist during the Spanish-American War and the First World War.  Tyson had also been critical of Bachman for having resigned his seat on the Tennessee Supreme Court.  Bachman pointed out John K. Shields had “waged his candidacy for two months before the legislature in 1913 for the office of United States Senator and only resigned after his election.”  Bachman said he did not believe it to be right for him to conduct a campaign for a higher office from the bench of the state Supreme Court.

Bachman gave the General a taste of his own medicine during his opening speech, noting Tyson “waited until he was long past the meridian of life before he ever became interested in public journalism, and it was only after he announced his candidacy for the greatest office within the gift of the people of Tennessee” that “it was suddenly announced that he had acquired from the owners of the Knoxville Sentinel” control of the “great daily newspaper…”  Bachman was quick to repeat that Tyson had reputedly bought control of the Knoxville Sentinel for $1 million.  A million dollars in 1924 was a staggering sum of money, almost the equivalent of $14.5 million today.  Bachman complained “this newspaper is daily circulating over a large part of East Tennessee and is read by many voters who do not realize that it is the absolute personal property of General Tyson.”  Worse still, according to Judge Bachman, many of the Sentinel’s readers were unaware Tyson’s newspaper “that it might print daily the exaggerations about his candidacy that constantly appear therein.”  Bachman scoffed that L. D. Tyson had realized an overwhelming desire to pursue journalistic endeavors and become the editor of a daily newspaper.  Judge Bachman insisted Tyson had bought the Sentinel to further his own senatorial ambitions.  The judge had a point, as General Tyson sold the Sentinel not long after the 1924 election.

Judge Bachman said L. D. Tyson’s entire campaign for the United States Senate was based upon the approximately eighteen months he had been in “the military service of this country.”  “General Tyson says little of the avocations in which he was engaged during the other, more than 30 years of his career,” Bachman said.  “He does not tell you that during nearly all of that time he was engaged in the operation of large manufacturing and industrial plants through the ownership of which he was enabled to amass a great fortune.”  Bachman was careful to say that simply because L. D. Tyson was quite wealthy, it did not detract from the General “as a citizen.”  Bachman pointed out Tyson’s profile in “Who’s Who in Tennessee”, citing the page number, L. D. Tyson had been listed as the “president of the Knoxville Cotton Mills, that he was president of the Knoxville Woolen Mills that he was president of the Lenoir City Land Company; that he was vice president of the East Tennessee Coal & Iron Co., and of the Coal Creek Mining and Manufacturing Co.”  Judge Bachman pressed his point, noting quite nearly “every one of those manufacturing enterprises” owned by Tyson had “been a large beneficiary of the protective tariff schedules that have from time to time been placed by Republican Congresses on the statute books of this country.”

Bachman’s speech in Franklin County was the official opening of his drive for the senatorial nomination.

Senator John Knight Shields was not entirely bereft of political allies.  The Nashville Banner, owned by the Stahlman family, was solidly behind the senator in his reelection campaign.  The bitter rival of the Nashville Tennessean, the animus between the two daily newspapers in Tennessee’s capitol had seeped into the crevices of relations between the rival publishers.  The Banner, according to Luke Lea’s Tennessean, had practically all but endorsed the election of President Calvin Coolidge and was threatening to back the GOP nominee for the U. S. Senate if Shields lost his reelection bid inside the Democratic primary.

John Draper Erwin, the Tennessean’s national correspondent in Washington, had worked for both senators Luke Lea and John Knight Shields at one time or another.  Erwin published a story to likely refute rumors Senator Kenneth D. McKellar was backing his senior colleague for renomination.  Erwin wrote McKellar denied “giving aid and comfort” to Senator John K. Shields.  Erwin thought McKellar’s statement “direct and positive” and believed it “will settle all controversies over the matter.”  Senator McKellar insisted, “I have been absolutely neutral in the present senatorial campaign, and know of no reason now why I should take part in that contest.”  In a press release, McKellar related, “I have never disclosed to a single human being which of the three candidates I expect to vote for, and at this time do not even know myself.”  Whatever controversy existed about McKellar supporting Shields had been created by the Memphis Commercial Appeal, which complained the junior senator had placed in the Congressional Record a speech made by the senior senator.  McKellar said his placing the speech of his senior colleague in the Congressional Record was a common courtesy extended between senatorial colleagues and was above petty criticism.  What McKellar had put into the Congressional Record for Shields was a recitation of Shields’ record while in the U. S. Senate.  Senator McKellar pointed out he had extended every possible courtesy to all of the candidates; McKellar said he had “furnished General Tyson with records or documents that he, or his manager, has asked for, and just as I would in like manner perform the same courteous, official acts for Judge Bachman, should he so request.”  McKellar poked at the editor of the Commercial Appeal, saying, “I would even put one of C. P. J. Mooney’s editorials in the Record, should he ask me to do so, though I might not agree with such editorial at all.”  Mooney had been vociferously opposed to Senator McKellar’s reelection just two years earlier.

In just over a month’s time, Tennesseans would go to the polls to determine the Democratic nominee for the U. S. Senate.