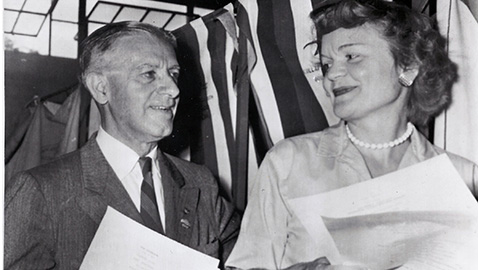 By Ray Hill
Former governor Prentice Cooper was running hard for the Democratic nomination for the United States Senate against incumbent Albert Gore, who was seeking a second term.  The sixty-two year old Cooper toured the state accompanied by his much younger and attractive wife and three small sons.  Some Tennesseans certainly got a smile out of the fact the fifty year-old Albert Gore’s own children were older than those of Governor Cooper.

With only two months before the primary election, both candidates kept up a frenzied pace.  The issues between Gore and Cooper were also more clearly defined than usual.  Cooper had formally kicked off his campaign in Murfreesboro and sharply criticized Gore’s record on civil rights in particular.  The former governor was also lambasting the senator for supporting foreign aid.  Gore shrewdly raised the specter of the late Secretary of State Cordell Hull in defending his support for foreign aid and reciprocal trade agreements.  Hull was still a revered figure throughout much of Tennessee.

Although Gore’s senior in terms of age, Prentice Cooper was running hard.  Cooper had scheduled 11 stops in East Tennessee in one day alone at the end of June.  Nor was Albert Gore sitting on his hands; the senator was also campaigning at a frenetic pace.  While campaigning in Dickson, Tennessee, the senator denied Cooper’s inference he had voted for forced integration.  Gore pointed out he had never voted to “force children into unwanted racial mixing in schools” and promised he would never do so.  “No such bill has been acted upon by the U. S. Senate during my six years and I know of no such bill during my lifetime and I am 50.”

One of Governor Cooper’s stops in East Tennessee was Knoxville.  Having settled on the themes of segregation and foreign aid, Senator Gore was campaigning in Memphis and said he was “delighted” to campaign on issues raised by his opponents.  The issue of segregation in schools had seeped into the gubernatorial campaign and Edmund Orgill, the mayor of Memphis and perhaps the most progressive candidate seeking the Democratic nomination for governor, denied he had ever advocated racial integration in schools.  Gore, responding to charges he was favorable to integration, told audiences in West Tennessee he had never “supported measures which would force our children into unwanted and unwarranted racial mixing in our schools.”

Mrs. Fred Loy of Knoxville wrote a letter to the editor of the News-Sentinel, saying she had not considered the possibility of Prentice Cooper being elected to the United States Senate until after hearing the former governor speak.  After listening to Cooper’s speech outlining his views “on civil rights, closing public schools rather than integrate, and the reciprocal trade agreement” Mrs. Loy worried the former governor might be elected, a prospect she frankly confessed “horrified” her.  Mrs. Loy wrote that Prentice Cooper being elected to the Senate would put Tennessee on par with Georgia, who was represented by Herman Talmadge in the U. S. Senate.  Mrs. Loy described Albert Gore as “intelligent, educated, honest” and “hardworking” on behalf of Tennessee and Tennesseans.  Mrs. Loy complained about politicians “using civil rights, as they always have, as a political football.”  Mrs. Loy wrote that after hearing Governor Cooper speak, “I felt like we had gone backward about 97 years instead of forward.”  She urged her fellow citizens to vote for Albert Gore.

Apparently Prentice Cooper or his advisors believed Albert Gore was having some success in reminding Tennesseans of Cordell Hull’s strong support for reciprocal trade agreements.  In truth, the subject was something of an obsession for Hull long before he was selected by President Franklin Roosevelt to serve as Secretary of State.  Hull had fervently supported reciprocal trade agreements as both a congressman and senator.  Cooper tried to reshape the issue by telling audiences Hull had something else in mind rather than giving away tens of millions of taxpayer dollars.  Governor Cooper said Cordell Hull’s own trade program was quite simple and could be summarized as “trading a commodity we had plenty of for something we needed.”  The Chattanooga Times, like Mrs. Loy, was horrified.  The Times challenged Cooper’s interpretation of Hull’s policies and said the late Secretary of State must be turning over in his grave.  While acknowledging Cooper had the right to his own opinion, the Chattanooga Times fretted the former governor “despoils the memory of a great American when he attempts to boil down Cordell Hull’s deep convictions on trade to any such restricted aim.”

Senator Albert Gore continued to hit back at the former governor’s assertions he was merely giving away taxpayer dollars in supporting foreign aid and trade agreements with other nations.  “I wish to emphasize,” Gore said, “that the program which would be extended by the pending bill is the same program as that conceived by Cordell Hull.”  Gore pointed out Tennessee had an interest in the trade bill pending before the Senate, as the state’s share of exports of agricultural and industrial products amounted to more than $230 million.  When Senator Gore flew back to Washington to vote for the trade bill, his wife Pauline campaigned in his stead.  Mrs. Gore proved to be more than an able substitute for the senator, telling her audience should the Cordell Hull Trade program die, the practical effect would be fewer jobs for many Tennesseans, as well as lower market prices for Tennessee farmers.  Prentice Cooper had a hard row to hoe in facing down legislation that bore the name of Cordell Hull.

Cooper picked up the endorsement of fellow former governor Jim Nance McCord in early July.  Both Cooper and McCord had enjoyed strong support from the late Senator Kenneth McKellar and his political partner E. H. Crump, leader of the Shelby County political organization.  Gore was picking up endorsements of his own and saw a steady tide of support from local unions across the state.  Unlike Cooper, Senator Gore refused to utter the name of his opponent and used the occasional flash of humor to pick at the former governor.  Cooper had repeatedly referred to Gore’s supposed national ambitions, as evidenced by his abbreviated bid for the vice presidential nomination at the 1956 Democratic National Convention.  Gore’s competitors included his colleague Estes Kefauver and a young senator from Massachusetts, John F. Kennedy.  “It hadn’t occurred to me that anyone had to be a traitor to Tennessee in order to allow his name to be presented before a Democratic National convention.”  With a little smile Gore added, “And that goes for 1944 as well as 1956.”  It was a subtle jab at Prentice Cooper who entered the 1944 Democratic National Convention as a candidate for vice president.  While his support was confined to Tennessee, unlike that of Gore in 1956, Prentice Cooper’s fellow Tennesseans had supported him until the bitter end, refusing to vote for eventual nominee Harry S. Truman or incumbent Vice President Henry Wallace.

Senator Gore did hit back at Prentice Cooper by stressing his own support for TVA.  The former governor replied he was somewhat puzzled by the inference he was not enthusiastically for the Tennessee Valley Authority.  “The only way I can explain this is that he may have found a few of my friends who said they were not for TVA,” Cooper said.  “If they are against TVA, they have not so advised me and they will certainly have no influence on me in the matter.”  The Tennessean gleefully used the incident to point out those influential friends who most certainly were not for TVA.  The Tennessean noted “millionaire” Justin Potter “who gives the Republican party more lavish financial support than any other person in Tennessee” had not merely stopped at calling TVA socialistic, but had bought “expensive ads in the Chicago Tribune to denounce it as communistic.”

The Memphis Press-Scimitar reminded its readers Prentice Cooper, while seeking to reclaim the governor’s office, had frequently touted his experience, a qualification he no longer could extol while campaigning for the U. S. Senate.  Albert Gore, on the other hand, at age fifty was a veteran of twenty years in Congress.  At sixty-two, it was doubtful Prentice Cooper could remain in the Senate long enough to accrue enough seniority to become powerful enough to help Tennessee.

Senator Gore continued to campaign on his support for reciprocal trade agreements, always careful to invoke the name of his political mentor, Cordell Hull, and believed Prentice Cooper’s opposition might be backfiring.  “In the past week I have accepted the issue of extending or scrapping the Cordell Hull reciprocal trade program and I’ve won smashing approval of the people for my stand on extending it,” Gore said.  “Out of 35 counties in East Tennessee, where this is a big issue, I expect to carry more than 30.”

Columnist Edward B. Smith, writing in the Knoxville News-Sentinel speculated Prentice Cooper’s senatorial campaign was having a negative effect upon the gubernatorial campaigns of both Andrew “Tip” Taylor and Buford Ellington.  Smith thought Cooper was “running poorly against Sen. Albert Gore” following a “campaign of demagoguery and misrepresentation” traits “Cooper had not hitherto revealed.”  Smith’s somewhat tortured analysis concluded the Cooper for Senate campaign tended to boost the gubernatorial campaign of Edmund Orgill of Memphis.

By the middle of July, Prentice Cooper was pounding Gore for having missed 85 roll-call votes in the Senate.  “This man Gore is being paid $75 a day to represent you,” Cooper charged in a speech in Clarksville.  “And I say he isn’t doing it.”  The former governor noted Albert Gore had “been to Europe 16 times since he’s been in Congress” yet did not “have the time to talk to the farmers and manufacturers of the state.”  Evidently realizing he was behind, Governor Cooper doubled down on the theme of segregation.  Cooper pledged to “dedicate my utmost efforts to fighting against forced mixing of the races in our schools as your U. S. Senator.”  Cooper told audiences in West Tennessee his first act as senator would be to add his name to the Southern Manifesto.  Cooper growled there was much yet to be done in “preserving the Southern way of life” and he was just the man to do it.

As Albert Gore campaigned through the oppressive heat of West Tennessee in his shirtsleeves, the senator accused his opponent of utilizing “half truths and outright lies” about his record.  Gore complained none of Cooper’s attacks on his record on civil rights “made no mention of the bitter fight I waged, along with other southern senators which resulted in a watered down version of the civil rights bill.”  Gore boasted he had voted with his Southern colleagues on “six important amendments” which had the effect of leaving the civil rights bill as “nothing more than a right to vote bill – – – and I believe in the right to vote.”

The campaign raged right up until Election Day with Senator Gore remaining the favorite, although Prentice Cooper continued to campaign hard.  One indication Prentice Cooper likely knew he would not defeat Senator Gore was his insistence upon going home to Shelbyville rather than remaining at his Nashville headquarters.  A seasoned veteran of Tennessee politics, Cooper’s hunch was correct.  Albert Gore won a sweeping victory in winning the Democratic nomination for the United States Senate.  Prentice Cooper only carried one of Tennessee’s big four counties – – – Hamilton – – – and a few counties surrounding Chattanooga, as well as a handful of counties in West Tennessee.  Cooper carried only two of Tennessee’s nine Congressional districts, the Third (surrounding Chattanooga) and the rural Eighth District in West Tennessee.  The former governor won both by similar margins, winning more than 55% of the vote.  Albert Gore carried everything else, including the once formidable domain of Ed Crump.  Gore defeated Cooper by more than 120,000 votes.

The 1958 Senate race was the end of Prentice Cooper’s elective political career.  Albert Gore’s was far from over.