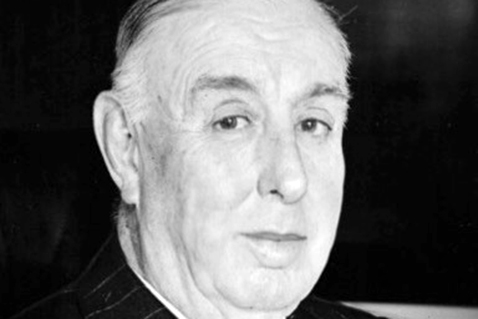 William Hale Thompson enjoyed a long political career in a city known for its corruption.  “Big Bill” Thompson was the last Republican to be elected mayor of Chicago.  A modern political showman without being burdened with many core beliefs, Thompson had something of a pedigree.  His father of the same name was a successful and respected businessman in Chicago, while his mother Medora’s father had been the first fire chief of the Windy City.  One contemporary observer recalled after the former mayor’s death, “William Hale Thompson was the most potent political power in Chicago for two stormy decades. . .”

One newspaperman remembered William Hale Thompson brought notoriety to Chicago.  “’Big Bill’ Thompson was in the headlines nearly every day,” Sam Tucker wrote, “Chicago appeared to all the outside world as a bloody field of battle; Thompson and Thompsonism were held up to most of the world as a strange and dangerous sort of American lunacy.”

The younger William Hale Thompson certainly had a mind of his own and departed Chicago at fourteen for Wyoming where he became a cowboy and owned cattle.  Oddly enough, one of his talismans for his future campaigns became the sombrero.  Yet the young “Big Bill” Thompson returned home to Chicago with $30,000 (more than $100,000 today).  Thompson also managed the estate left by his deceased father.  Six feet tall and usually boasting an ample figure, he earned the nickname “Big Bill,” which stuck with him throughout his life.

William Hale Thompson allied himself with GOP boss William Lorimer who had won election to the United States Senate, only to have that body vote to expel him.  Thompson narrowly won a seat on the Chicago City Council in 1901 and served as an alderman.  In 1902, “Big Bill” Thompson won election to the Cook County Board of Commissioners.  Thompson won his first term as mayor of Chicago in 1915.  Even then Thompson’s bent toward isolationism showed through his somewhat pacifist attitude toward American entry into the First World War, a position which was admittedly unpopular with many Chicagoans.  Still, Thompson managed to win reelection as mayor in 1919 by 21,000 votes.  Mayor Thompson feuded with the Chicago Tribune, which became a bastion of isolation opinion under its publisher Colonel Robert “Bertie” McCormick.  Thompson sued the newspaper in 1920 for $500,000, alleging the Tribune had libeled him over things it had written about his war record.  The case actually went to trial, but the judge declared a mistrial when one of the jurors became ill.  There was no effort to start a new trial.

Because Mayor William Hale Thompson did nothing to impede the activities of those citizens or groups who opposed the conscription of troops or protested against the First World War, he was denounced by some as “Kaiser Bill” Thompson.  Thompson’s neutrality in that instance was akin to his anti-British stance, which was calculated to appeal to the heavy Irish and German populations inside Chicago.  At the time, Thompson had the overwhelming support of Black citizens, most of whom still voted Republican.

The next lawsuit was initiated by the Chicago Tribune, which sued Thompson and demanded the mayor and his associates refund $1,732,279 which had been “paid out in real estate expert fees” by the city government.  A judge summarily ruled Thompson and his associates had to refund the staggering amount, but that decision was overturned by a ruling of the Illinois State Supreme Court which found the mayor “was not in a conspiracy to defraud the city.”

The veteran campaigner skipped a term, choosing not to run in the 1923 election and was succeeded by William Emmett Dever, a Democrat.  During his interlude away from the mayor’s office, Thompson was preoccupied following his appointment as chairman of the Illinois Waterways Commission.    It provided Thompson with a public forum, as well as allowing him to use his primary skill, promoting a project and himself.  It also allowed “Big Bill” Thompson to remain politically relevant and viable.

The colorful former mayor sought to come roaring back into office by announcing his candidacy against his successor, Mayor Dever.  Always possessing a fertile mind, especially when it came to self-promotion and attracting publicity, Thompson sponsored a live “debate” between himself and two live rats, which were supposed to represent his opponents.  Ironically, Thompson’s campaign was aided by a brutally violent gang war among Chicago’s crime lords.  Still, Thompson focused attention away from the blood running in the streets to a more ephemeral foe: King George V, the monarch of Great Britain.  It was during the 1927 campaign the former mayor made a pledge for which he is still remembered today.  Speaking before Irish audiences (who were not especially fond of the English), Thompson promised that were he so unfortunate as to meet King George, he would punch the monarch in “the snoot.”

After a typically colorful campaign, Thompson was elected to a third term as mayor of Chicago over the Democratic candidate, William Emmett Dever.  During his inauguration to his third term as mayor of Chicago, Thompson made a pledge to the people he did not keep.  “Our new Superintendent of Police has my positive instructions to drive the crooks and thieves and lawbreakers out of Chicago in ninety days, so that the people, their homes and their property may again be secure.”

It was during Thompson’s third term one of the most well-remembered instances of the Chicago gang wars occurred, the St. Valentine’s Day Massacre.  On Valentine’s Day of 1929, seven members of the North Side Gang headed by George “Bugs” Moran, who were rivals of the Italian outfit headed by Al Capone, were lined up against a wall and executed.  The murders took place at a garage located at 2122 North Clark Street and, according to witnesses, two of the four gunmen were wearing police uniforms.  All of the victims were dead, save for one, Frank Gusenberg, who had been shot fourteen times.  When police tried to question Gusenberg, he growled, “No one shot me.”  He died hours later.

Mayor Thompson’s third term was also rife with feuding inside his own party.  Thompson not surprisingly loathed Colonel McCormick, the publisher of the Chicago Tribune.  The Colonel’s brother, Medill, had been a congressman and U. S. senator from Illinois.  While unknown outside the family at the time, Medill McCormick had committed suicide following the loss of his seat in the United States Senate.  McCormick’s widow, Ruth, was also the daughter of GOP wealthy industrialist, kingmaker and U. S. Senator Marcus A. Hanna of Ohio.  Ruth Hanna McCormick became active as a candidate in GOP politics in Illinois, defeating incumbent Senator Charles Deneen in the 1930 Republican primary.  Thompson refused to support Ruth Hanna McCormick in the 1930 general election, which she lost badly to Democrat James Hamilton Lewis.

With the beginning of the Great Depression and the bloody reign of Al Capone, voters began to weary of “Big Bill” Thompson.  No longer did they find the mayor’s antics amusing.  Eventually, they decided Thompson was a luxury they could no longer afford.  Still, Thompson stubbornly ran for reelection in 1931 but his administration was utterly crippled by its cooperation with the Capone crime family and it was an open secret the graft had penetrated into the very bone and sinew of the city government.  Thompson’s political weakness was readily apparent and he was challenged in the Republican primary.  Thompson won the nomination of his party, but only managed to scrape by with a plurality against two other candidates who won 53% of the votes combined.

Anton J. Cermak, leader of the Democratic Party in Chicago was the mayoral nominee in 1931 and he defeated “Big Bill” Thompson easily.  Cermak won better than 58% of the vote and defeated Thompson by quite nearly 200,000 ballots.

Colonel McCormick, as usual, had the last word in the Tribune, which stated, “For Chicago Thompson has meant filth, corruption, obscenity, idiocy and bankruptcy . . .  He has given the city an international reputation for moronic buffoonery, barbaric crime, triumphant hoodlumism, unchecked graft, and a dejected citizenship.”  McCormick thundered Thompson had “made Chicago a byword for the collapse of American civilization.”  The Colonel concluded his rant by writing, “In his attempt to continue this he excelled himself as a liar and defamer of character.”

Thompson tried a comeback in 1939, entering the Republican primary for mayor in 1939.  Following his loss of the 1939 GOP primary to Dwight Green, “Big Bill” Thompson lived in a suite of rooms at Chicago’s Blackstone Hotel.  The Blackstone still stands today, an elegant 290-foot, 21-story hotel located on Michigan Avenue and Balbo Drive in Chicago’s Historic District.  News reports began to trickle out of the Blackstone after “Big Bill” Thompson suffered a heart attack.  The former mayor’s physician, T. J. Coogan, told reporters Thompson had been under an oxygen tent and had drifted into unconsciousness.  The three-time mayor died in his suite in the Blackstone Hotel on March 19, 1944, at age seventy-four.  “Big Bill” slipped away with his sister and brother and long-time secretary by his bedside.  His widow was resting.

“Big Bill” Thompson’s death created one last sensation that nobody would have enjoyed more than the late former mayor.  As the safety deposit boxes of the late mayor were opened, an abundance of cash was discovered, causing some to speculate it was stacks of money from bribes and other corruption.  The amount was close to $2 million (over $28 million today).  Thompson’s lawyer, James W. Breen, explained Thompson had sold nearly $2 million worth of Middle West utilities stock and had “stowed the money away.”  Breen also recalled when Thompson first became mayor of Chicago in 1915, “Big Bill” had sold off 10,000 shares of Commonwealth Edison worth $123 per share, for a total of $1,230,000.  Thompson had told friends he did not wish to be noted as a stockholder while he was mayor.  Breen acknowledged while “Big Bill” Thompson liked giving the illusion he was a big spender, the lawyer said the former mayor “watched his personal fortune closely.”  Although the son of a millionaire had carefully invested his money and watched it, the rumors about the former mayor having accumulated an astonishing pile of money persist to this day.

Several newspapers published editorials following “Big Bill” Thompson’s death.  The Chicago Sun acknowledged the late mayor was an ardent booster of the Windy City, but the editorial also recalled the Thompson machine and noted nobody would “contend that the task of reforming Chicago politics has ended.”  The Sun editorial recalled Thompson had played “upon old-country loyalties among some voters, and playing upon isolationist sentiments, he became himself an isolationist symbol.”

Years after Thompson’s mayoral reign ended and “Big Bill” was content to be off the political stage, journalist Sam Tucker happened to be staying at a hotel in Washington, D.C., where Thompson was also a guest.  The former mayor invited Tucker, along with “two or three” old cronies to come to his rooms for a visit.  Thompson had no reason to pose for political purposes and Tucker got a view of the actual man.  Sam Tucker wrote, “Here was young man Thompson, heir to several million dollars, educated in the most expensive schools.  He had no job, but he wanted to be busy.  He didn’t need money, but he liked people and he had a normal appetite for power.  Politics looked like a promising field – – – but how is a millionaire’s son out of Yale going to get the votes of the boys from back of the yards?”  Tucker surmised Thompson became a political showman who skillfully roused “fears and hates among the little people over vague, faked enemies that did not exist.”

Sam Tucker sadly concluded for William Hale Thompson, the ends justified the means.  The journalist wrote he was not trying to “white-wash” the former mayor and admitted, “The evils he set up are reflected to this very day in the silly prejudices that make Chicago still the isolationist capital of the country.”  “He thought it a legitimate way to get the power to do the good things he wanted to do,” Tucker lamented.