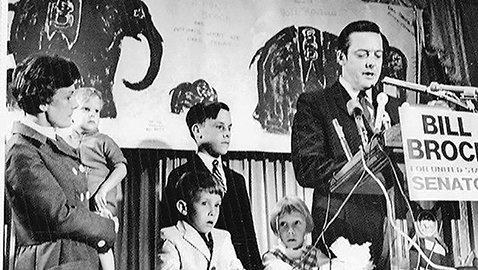 By Ray Hill
Congressman Bill Brock’s decision not to run for governor of Tennessee opened the field to a plethora of candidates and for the first time in Volunteer State history serious candidates populated both the Republican and Democratic primaries. Brock opted to run for the United States Senate to challenge three term incumbent Albert Gore. The Tennessee Senate race had national implications that year and became part of the Nixon White House’s “Southern strategy.” It would be a hard fought and bitter race.

The theme of Bill Brock’s 1970 campaign for the Senate was predicated on the theory Albert Gore was out of touch with Tennessee. Gore was a critic of the Nixon administration, but being a maverick, he had been a persistent critic of Nixon’s predecessor Lyndon Johnson as well. Lastly, the race between Bill Brock and Albert Gore would prove to be a test of whether Tennessee had truly become a two-party state.

Neither Brock nor Gore escaped serious competition inside their own primaries. Gore was challenged by Hudley Crockett, former press secretary to Governor Buford Ellington. Crockett was considerably younger than Gore and having been a former newscaster, had an excellent television presence and spoke well. Crockett was far more conservative than Gore and ran to the senator’s right.

Brock’s own opponent inside the Republican primary had more star power than Hudley Crockett. Tex Ritter had long been a popular recording artist and enjoyed a modest success as an actor in 85 low-budget western movies. One thing Tex Ritter did have was high name recognition.

Brock made a tour of the state to officially announce what had long been anticipated, his challenge to Albert Gore. Brock’s itinerary began with a breakfast at the Read House Hotel in his native Chattanooga followed by a press conference. Brock would leave for stops in Knoxville, Tri-Cities, Nashville, Jackson and Memphis. The tour took fifteen hours by airplane. The Tennessean, no fan of Bill Brock’s, dismissed the primary opponents of both the congressman and Senator Gore, feeling the race would come down to “the young candy millionaire and the wise warrior from Carthage.”

Senator Gore, seemingly unruffled and likely having long known his 1970 reelection bid would be difficult, spoke in Jackson, Tennessee before the local Labor Council and declared three factors would unite voters behind his candidacy for a fourth term. Gore quickly defined the three issues as tax reductions, Social Security and high interest rates.

“High interest rates are driving the working man up the wall,” Gore declared. “They cause an increase in the cost of living and make everything that one buys, builds, or borrows cost more.” Gore pointed out, “While others are fighting to push the interest rates up, I have been fighting to keep them down.” Gore told his audience interest rates “are twice as high as they should be.”

Gore had been introduced to a crowd estimated at 1,500 persons by his former colleague in the United States Senate, Ross Bass. Bass described Gore as “the kind of man who brings honor to our state.” Another reminder of Gore’s long tenure in Washington was the presence of former governor Gordon Browning on the platform. Gore had managed Browning’s first statewide campaign in 1934, a losing bid for the Democratic nomination for the United States Senate. When Browning was elected governor for the first time in 1936, Gore became Tennessee’s Commissioner of Labor before resigning in 1938 to run successfully for Congress. It was never far from Albert Gore’s mind that Tennessee had been carried by Richard Nixon in 1968, but the senator thundered, “Regardless of how Tennessee voted in the presidential election of 1968, these questions will be the uniting factors at the polls this year.”

Despite the Tennessean’s prediction, both candidates had to win their respective primaries before facing off in the November general election. The Tennessean speculate the Brock – Ritter race “looks like a knuckle-buster.” Polls reputedly showed Brock beginning the race with a two-to-one margin over Tex Ritter, but both initially lagged behind Senator Gore. Ritter, now largely remembered as the father of actor John Ritter, scoffed at polls. “I think the polls at this point don’t do much except flatter the people who pay for them,” Ritter said.

Despite a spirited campaign waged by Tex Ritter, Bill Brock chose to largely ignore his primary opponent. When pressed, Brock replied, “We have a common goal. We want to make Howard Baker Tennessee’s senior senator.”

Senator Albert Gore proved to be harder pressed inside his own primary, although the “Old Gray Fox” kept pummeling Brock throughout much of his campaign. Gore loudly proclaimed he was “marked as Target No. 1 for purge” by the Nixon White House. Gore said he did agree with one thing Bill Brock said: “We disagree on almost everything.” Gore told one audience, “Either I have represented Tennessee or a majority of her congressmen has misrepresented Tennessee’s interests on” key issues before the Congress. It was Albert Gore’s opinion, “Brock has consistently voted against the best interests of Tennesseans.”

While Gore spent most of his time attacking Bill Brock throughout the summer of 1970, Tex Ritter added his own criticisms as the primary election approached. Ritter opined he did not believe “any person in pubic service in Tennessee, except possibly Sen. Howard Baker, can defeat Sen. Albert Gore in November.” The country star complained Brock had voted against the Appalachian Regional Commission, grousing, “However, he did start voting for ARC in 1969, the year before the election.”

The primary election was an overwhelming victory for Bill Brock and a crushing defeat for Tex Ritter. Brock won close to 75% of the vote, while Ritter won just over 23% of the ballots cast in the Republican primary. More than 230,000 Tennesseans had voted in the Republican senatorial primary. Conversely, Albert Gore scraped by the win the Democratic nomination, barely winning 51% of the vote. Hudley Crockett won an impressive 45% of the ballots, with two minor candidates accounting for the rest. Gore’s weakness in areas that had been solidly Democratic for decades was a warning for the general election. In Madison County (Jackson, Tennessee), Gore won less than a third of the votes cast inside the Democratic primary. John parish, writing in the Jackson Sun said the biggest story of the primary election “was the resounding rejection of Sen. Albert Gore by Madison County voters.” Evidently, the senator’s personal popularity in Jackson had continued to plummet as he had barely lost Madison County to Dan Kuykendall in 1964. There was reason to believe Bill Brock would do even better and most political observers felt West Tennessee would be the key battleground in the state and would eventually determine the winner of the Senate race. Brock would certainly carry heavily Republican East Tennessee, while Gore was expected to win his own Middle Tennessee. West Tennessee loomed large in the general election contest between Congressman Bill Brock and Senator Albert Gore.

Gore was naturally pleased by winning his primary, but Congressman Brock scoffed at the notion the senator could brag about such a narrow victory. “Sen. Gore has misread this primary just like he misread the state of Tennessee for the past 18 years,” brock declared. “I don’t see how an incumbent who has served in the Senate as long as Sen. Gore can consider himself a winner when he barely received 50% of the vote.”

For his own part, Tex Ritter accepted his defeat gracefully and explained it away by pointing to Hudley Crockett’s campaign against Senator Gore. “Hudley gave them a choice in the Democratic party. They took the votes we had counted on in our race,” Ritter said.

Those folks who had voted for Hudley Crockett, almost 239,000 Tennesseans, clearly held the balance of power in the senatorial election in November. Brock naturally said he “would hope to get all of Hudley’s vote” in the general election. “Issues we have in November go beyond party lines. I intend to get votes from Republicans, Democrats and Independents across the state,” Brock said. The congressman was also careful to offer some words of praise and consolation for Tex Ritter, calling the entertainer a “gracious and fine individual who ran a credible campaign.”

As Bill Brock won the GOP nomination to face Senator Albert Gore in the general election, Winfield Dunn of Memphis surprised nearly everyone by winning the Republican nomination for governor over three other qualified candidates. The victories of Brock and Dunn were viewed by some as a blow to Senator Howard Baker. Many of Baker’s closest allies in Tennessee had been working hard for both Tex Ritter and gubernatorial candidate Claude Robertson.

Gore attempted to put the best face possible on his scare inside his own primary. “The results today will help us in November,” the senator claimed. “I believe the primary battle may have been the best thing that could have happened to us. The people have been aroused and we have a strong head of steam up now for November. I’m going to ride that victory horse all across Tennessee until the snow falls.”

Senator Gore was referencing perhaps the most famous political advertisement of the 1970, which showed him astride a white horse. Son Al, Jr. was featured in that ad, as well as another during the course of the campaign. Young was wearing his military uniform and received some advice from his father, “Son, always love your country.”

Bill Brock opened his fall campaign in Athens, Tennessee, a tradition begun during his first campaign for Congress in 1962. Brock lambasted Gore for the senator’s liberalism, which he believed did not represent the thinking of a majority of Tennesseans. Gore, campaigning in Brock’s home city of Chattanooga, retorted the Congressman’s voting record was so conservative and “so negative that it makes Sen. Goldwater’s appear socialistic.” The senator chided Brock as a “self-proclaimed Mr. No-No”, a title Gore derisively said no other congressman would want “or whose record would justify competition for the title.”

Busing was an issue during the 1970 Senate race and while Senator Gore claimed to be against forced busing, in the eyes of many Tennesseans, his views were suspect. Congressman Brock was the guest of honor at a barbecue in Jackson, Tennessee sponsored by disaffected Democrats. Brock hit the busing issue head on, saying, “The only solution to the disgraceful forced busing of our children is to put the control of our schools back in the hands of parents, teachers and local school boards where it belongs.” Brock had sponsored a Constitutional Amendment to allow freedom of choice in public schools and promised to continue to press for its adoption. Brock pressed his advantage by pointing to Gore’s support for Robert McRae to be appointed to the federal bench. Judge McRae was a particularly controversial figure in West Tennessee due to his decisions pertaining to school desegregation cases, which affected several West Tennessee school districts. Brock said “judges instead of teachers” were running public schools and his own belief was parents and teachers “care more about a single child than all of the bureaucrats in Washington.”

“I can disagree with Senator Gore on almost every issue . . . and I do,” Brock said. The Congressman said he believed the biggest difference between him and Albert Gore is “that he has forgotten what makes this country great.”

“Someone ought to tell Albert Gore that Ted Kennedy doesn’t have a vote in Tennessee,” Brock thundered, “and that white horse can’t vote either.”

The Nashville Tennessean apparently grasped Gore was in trouble and its political columnist, Joe Hatcher, did his part to prop the senator up before the general election. If anyone doubted where Hatcher stood, the columnist published an article in mid-September titled, “Albert Gore Makes Life Better for Tennesseans.” According to Joe Hatcher Senator Gore had “almost single-handedly led the fight to increase Social Security benefits by 15%.” Hatcher detailed Senator Gore’s support for social legislation, much of which Congressman Bill Brock had voted against.

It would remain a theme for the Gore campaign through the general election.