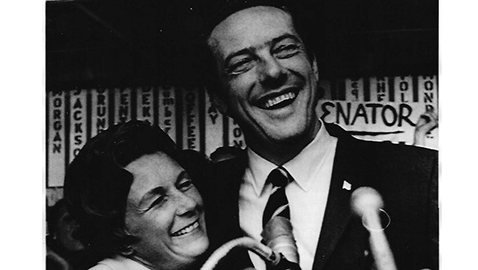 The race for the United States Senate in Tennessee in 1970 was one of the most closely watched races in the country that year.  The race between Congressman Bill Brock, the Republican nominee, and incumbent Senator Albert Gore had national implications.  Gore had managed to defeat Tennessee’s longest-serving U. S. senator, the aging Kenneth D. McKellar, to get to the Senate in 1952.  To remain in the Senate in 1958, Gore had handily defeated former governor Prentice Cooper.  By 1964, Gore had faced a serious Republican challenger in the person of Dan Kuykendall, who had held the senator to 53% of the vote.  Gore, an able campaigner, had relied on a heavy dose of populist economics and a carefully cultivated image as a political maverick.  Certainly, Gore managed to convey the image he was independent and not easily influenced, but many Tennesseans felt Gore was aloof and cared little about his home state.  Those opinions were confirmed when Gore only barely managed to scrape by inside the Democratic primary in 1970 against first-time candidate Hudley Crockett, who won 45% of the vote.  Crockett ran as an old-time conservative Democrat, holding the senator to barely 51% of the vote.  It was Hudley Crockett who had developed the campaign theme that Senator Gore was out of touch with Tennessee and Tennesseans.  It was Crockett who had first insisted Albert Gore was too liberal to represent Tennessee in the United States Senate.

Bill Brock’s campaign for the United States Senate had been carefully crafted to take advantage of Gore’s weaknesses as a public official.  Brock’s campaign slogan was “Bill Brock Believes,” to spread the message the congressman’s own beliefs were in keeping with those of the majority of Tennesseans.  Senator Gore’s allies tried to attach a darker meaning to the slogan, but Tennesseans saw it differently.  Liberals wanted to believe the 1970 Senate race in Tennessee was a fight between good and evil, while the reality was Tennessee was emerging into a truly two-party state for the first time in modern history.  Some Democrats believed they were victims of their own success.  Many folks had achieved greater success through the old New Deal programs and post World War II prosperity and had begun to vote for Republican candidates.

While an able campaigner, Albert Gore was markedly different from his late colleague Estes Kefauver, who may well have been the best campaigner of them all.  Kefauver, noting the political success of K. D. McKellar, copied to old senator’s extensive constituent service and made sure to answer his mail promptly and extend every courtesy possible to the people of Tennessee.  Albert Gore did not follow either example.

Howard Baker had used television during his successful 1966 senatorial campaign, defeating Governor Frank Clement.  Baker excelled in the medium of television while Clement was one of Tennessee’s most effective stump speakers and less comfortable before the TV cameras.  Indeed, it was largely through television that Estes Kefauver had made his reputation and became a national figure when his crime hearings were televised.  Still, candidates were expected to travel the highways and byways of the state, attend barbecues, speak from the courthouse steps, and shake hands in country stores.  The 1970 U. S. Senate race was the first campaign in Tennessee history to utilize mass media marketing.  It would change the nature of political campaigning in the state for all time.

The individual backgrounds of the two candidates could not have been more different; Gore’s hardscrabble existence had only changed through his dogged climb up the political ladder, becoming superintendent of schools in his own Smith County, Commissioner of Labor under Governor Gordon Browning, and being elected to Congress in 1938.  Gore had remained in Congress until 1952 when he had toppled Kenneth McKellar from the Senate.  By 1970, Albert Gore had been in Congress for thirty-two years.

Bill Brock came from a different world.  Brock’s grandfather, William Emerson Brock, had come from very modest means and was an American success story, becoming one of the most successful candy manufacturers in the United States.  The elder Brock had served a brief term in the United States Senate in 1929 following the death of Senator Lawrence D. Tyson.  W. E. Brock won a special election to finish out Tyson’s term, serving from 1929 – 1931.  The first Senator Brock had been, of course, a Democrat.  Bill Brock had grown up as the child of an affluent family, but it was also a family that profoundly believed it had a responsibility to help others, an example set by Brock’s grandmother, Miriam Acree Brock.  It was Miriam Brock who first started a program in 1921 to benefit African-Americans in the basement of a local Methodist church.  Mrs. Brock’s program eventually became the Bethlehem House project, which provided educational assistance to participants.  The Brock family was never one to merely give money to worthy causes; they also gave their personal time and energy.  Bill Brock, originally a Democrat like his grandfather, became a Young Republican and made his first race for Congress in 1962 because he genuinely believed public service was a calling for everyone.  Throughout his entire life, Bill Brock has strongly encouraged young people to become involved in their local communities and run for office as the best means to effectuate change.

The New Dealer and Southern populist Albert Gore and Bill Brock, the sleek individualist clashed on just about every issue before the electorate.  One sign that Albert Gore perceived he was in trouble with Tennessee voters may have been his producing his fiddle.  Gore had played his fiddle for anyone who would listen when he first ran for Congress in 1938.  When running against Senator McKellar in 1952, Gore had dusted off his fiddle and played for appreciative audiences.  After beating the venerable McKellar, Albert Gore seemed to think playing the fiddle was beneath the dignity of a senator of the United States.  By the end of September of 1970, Gore had once again produced his fiddle to delight an audience in Brock’s home city of Chattanooga.  Gore admitted “there was a time in my life when nothing meant so much to me as country music.”  The senator said, “If I had stayed with it, I’d be worth more money than Roy Acuff.”

Congressman Brock received a boost in his campaign to unseat Senator Albert Gore when President Richard Nixon came to Tennessee.  Tens of thousands of Tennesseans sought to catch a glimpse of the President when Nixon visited the campus of East Tennessee State University.  Many of the thousands gathered were young people, who roared “We want Nixon!”  Gubernatorial nominee Winfield Dunn and Congressman Bill Brock were on hand to receive strong endorsements from President Nixon, who remained largely popular in Tennessee.  “Bill Brock is a man of Tennessee, and a man of the 1970s – – – and what he stands for is what Tennessee in the 1970s stands for,” Nixon told the crowd.  “He stands for law enforcement.  He stands for fiscal responsibility.  He stands for progress with dignity and peace with honor.

President Nixon also praised Brock for his determination to end the Vietnam War, not through “weakness”, but a real and “lasting peace.”  Nixon said Brock had shown an independence similar to that of Senator Albert Gore by standing up to “the Big Spenders in Congress” and wasn’t afraid of taking an unpopular stand to support his own convictions.

Brock was well pleased with the President’s visit to Tennessee and told reporters he believed Nixon had helped change the momentum of the senatorial race.  Brock thought Senator Gore’s campaign had hit its peak in the first week of October.  Congressman Brock said, “The bigger the vote, the better chance I have.”

Both Winfield Dunn and Bill Brock continued to pick up support from Democrats across the state.  Governor Buford Ellington had no intention of supporting Democratic gubernatorial nominee John Jay Hooker, who had run a bitter race against Ellington in 1966.  Other Tennessee Democrats complained Governor Ellington barely lent any support to Gore’s reelection campaign.  Ellington was hardly the only Democrat in Tennessee lending little or no support to Albert Gore.  Gubernatorial nominee John Jay Hooker had rejected Gore’s proposal to campaign jointly across the state for fear the senator would be a political liability.  As it turned out, Hooker was quite likely more a political liability to Senator Gore.

The Nashville Tennessean fumed editorially about Nixon’s visit to Tennessee on behalf of the Republican candidates.  The Tennessean was fervently backing both John Jay Hooker and Albert Gore in the general election and published bitter editorials against Brock especially.  Ellis Binkley, the political writer for the Kingsport Times readily acknowledged Nixon’s trip to Tennessee had been “timely.”  Binkley acknowledged the President’s visit had come at a time when Senator Gore seemed to be “riding a growing swell across the state.”  Brock’s campaign certainly recognized the importance of Richard Nixon’s visit.  The Brock campaign took footage from one of Nixon’s two appearances in Tennessee for use as a television commercial.  Nor was it lost on Bill Brock that Nixon had carried Tennessee four times during his long political career.

Brock’s campaign advertisements on television ended with the announcement, “Bill Brock believes in the things we believe in”, which proved to be effective.  Even more effective was the use of average Tennesseans in his campaign commercials who raised complaints about Gore’s senatorial service on an array of issues.  John Seigenthaler, long affiliated with the Nashville Tennessean, attested to the effectiveness of the Brock campaign commercials.  Describing the Tennesseans appearing in the ads, Seigenthaler said, “You’re looking at your next-door neighbor and listening to him or her tell you what a bastard Albert Gore is.”  The novelty of the advertisements at the time was noted by Seigenthaler who recalled they were, “Not like anything anybody in that state (Tennessee) or I daresay in any other state, had seen before . . . And it was well executed.  It was sort of vox populi.  It was extremely well produced.”

Senator Albert Gore was likely unaware of the effectiveness of the Brock campaign commercials.  Jim Sasser, Gore’s campaign manager in 1970, later remembered that Gore had something of a naïve belief about just how powerful negative ads could be in deciding an election.  Still, Gore hit back hard and campaigned relentlessly throughout Tennessee.

As Election Day approached, both candidates predicted victory.  “Tennesseans are bone weary with high taxes, higher prices, crime and violence – – – and with politicians who offer no solutions, but rather more of the same.  They have a chance to express themselves forcibly four days hence, and I don’t think they will miss the chance,” Brock said.

While both Senator Gore and Congressman Brock seemed confident of the result, other observers were more cautious.  The election looked like a dead heat; the Nashville Banner polled reporters covering the Senate race, inquiring as to which candidate the reporters thought would win.  Eleven reporters responded they believed Bill Brock would win, while ten believed Senator Gore would win the general election.  Most major newspapers in Tennessee believed the race was too close to call.

Gore was stunned by his loss, although he made a gracious, yet defiant concession speech.  Winfield Dunn defeated John Jay Hooker and for the first time, Tennessee had two popularly elected Republican U. S. senators and a GOP governor.

Change had come to Tennessee.