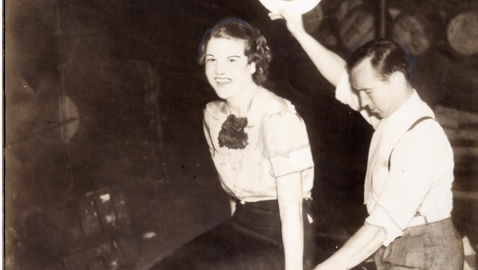 From the author’s personal collection.
Congressman Marion Zioncheck and his wife Rubye frolicking

Polls continue to show few people have much respect for Congress and its members, but when Marion Zioncheck was first elected in 1932, most Americans had both more respect and faith in Members of Congress.  Yet, Marion Zioncheck clearly suffered from some mental issues throughout his tenure in Congress and his antics would prove to be fodder for the press.

Born in Poland when that country was still part of the massive Austrian-Hungarian Empire on December 5, 1901, young Marion arrived in Seattle, Washington with his parents when he was four years old.  Possessing a sharp intellect and a winning personality, Zioncheck made a name for himself at the University of Washington where he was student body president.  Zioncheck earned a law degree, while at the same time participating in local Democratic Party politics.  The future Congressman was considered by some local Democrats to be a radical leftist, although he won a devoted following from many party adherents.

Senator Jones and the entire Republican ticket went down to defeat.  It was an overwhelming defeat and Jones won just under a third of the vote, a humiliating beating for such a long-time incumbent.  Most of the veteran Republican officeholders were defeated by whatever Democrat was on the ballot and Marion Zioncheck was no exception.  The Republicans had dominated the politics of Washington State’s First Congressional District for years and infighting had developed between Congressman John F. Miller and Ralph Horr.  Congressman Miller had lost the GOP primary to Horr in 1930 and Horr had won the general election.  Bitter about his defeat, the former Congressman challenged his successor in the 1932 Republican primary and won.  The fierce intraparty rivalry, along with the Great Depression helped Marion Zioncheck to beat former Congressman John F. Miller in the 1932 election.

Zioncheck had been the leader of the Washington Commonwealth Federation, an organization which hailed “production for use, not profit.”

Zioncheck entered Congress as a zealous advocate of the policies of newly elected President Franklin Delano Roosevelt and the New Deal.  Despite his later reputation, Congressman Zioncheck was apparently quite a hard worker.  Zioncheck was reelected to Congress in 1934, but the next year things changed, as did his behavior.

Evidently Zioncheck needed some recreational time and his exploits became widely known throughout the Capitol.  William “Fishbait” Miller, long-time Doorkeeper of the House, details some of Zioncheck’s wild doings, especially while publicly intoxicated.  A New Year’s party at Congressman Zioncheck’s house was so loud that neighbors complained and the police came to investigate.  They found a drunk Zioncheck having a grand time at the apartment building’s switchboard, where he was making calls and waking up more sedate tenants.  Rather than arrest the drunken Congressman, the police carted Zioncheck off to bed.

The Congressman’s behavior, even when on the floor of the House of Representatives, did little to improve.  Zioncheck did not hold his tongue and assailed James A. Farley, the Postmaster General, Chairman of the National Democratic Party and the chief dispenser of New Deal patronage under FDR, saying, “There has never been a dumber or more inadequate man in office.”  Zioncheck dismissed the members of the United States Supreme Court, sniffing that they were either “old fossils” or “corporation lawyers.”  During a debate, one fellow Congressman retorted Zioncheck himself was the biggest “jackass in Congress.”

Zioncheck continued his odd behavior away from the floor of the House.  He seemed to always be in trouble for speeding and once when he failed to show up for a court appearance, he was arrested by District of Columbia police who snorted at his claim of Congressional immunity.

It was shortly after that Congressman Zioncheck got married.  The thirty-four year old Congressman met a twenty-one year old woman named Rubye Nix, who was employed by the Works Progress Administration, who he claimed had telephoned him one night.  Zioncheck said he left his apartment to “look her over” and concluded she was “OK.”  They were married a week later.

Zioncheck had some time on his hands before departing for his honeymoon and invited reporters to help him celebrate his nuptials.  He wore a magnificent Indian headdress while serving his guests food and drink.

The couple’s honeymoon was rudely interrupted on more than one occasion, as Mrs. Zioncheck evidently shared a penchant for speeding with her new husband.  She was cited for speeding in Virginia, while Congressman Zioncheck had yet another warrant for his arrest issued due to the fact he had missed another court appearance.  The Congressman was arrested in North Carolina after a high speed chase and the local sheriff was all too happy to return Zioncheck to Alexandria, Virginia, but the Alexandria authorities were just as happy to let the matter go and Zioncheck went on his merry way.

The Zionchecks made their way to Puerto Rico and the Congressman was quickly involved in two car crashes, caused an incident that led to a riot, which Zioncheck indignantly insisted required United States Marines to put down.  There were also reports Zioncheck’s behavior caused at least one very angry man to challenge the Congressman to a duel.

Congressman Zioncheck was persuaded to leave Puerto Rico for the Virgin Islands where he was observed lapping soup from his bowl during a dinner party like a dog.  Yet again, Marion Zioncheck was involved in another car crash and apparently lapping soup was not the extent of his dog-like behavior, as it turned out the crash occurred after he had bitten the driver on the neck.

Zioncheck astonished his companions by consuming a cocktail of his own invention, which consisted of rum and hair tonic.

The Congressman’s honeymoon proceeded and he and his bride returned to the United States aboard a ship, which landed in New York City.  Considering his antics while on his honeymoon, it should hardly be surprising that Zioncheck was greeted by numerous reporters when he landed in New York.  The reporters did not have long to wait for further incidents and Zioncheck was in a Harlem nightclub when he threw a glass at another patron.  Despite not having gone to bed much before dawn, Zioncheck again entertained reporters the next morning, serving cocktails composed of rye whisky, honey and a dash of mint.  Later that day, Zioncheck happily removed his shoes and frolicked in the fountain at Rockefeller Center.  It was Zioncheck’s second time to splash about in a public fountain, as he and Rubye had done the same thing in Washington, D.C.

Upon returning to Washington, D.C., Congressman Zioncheck encountered his landlady, Pamela Young, an elderly woman who was a reporter.  The old lady had arrived at her apartment, which she had leased to Marion Zioncheck and was utterly dismayed by the condition of her home and its contents.  The Congressman was cordial enough, but the distraught woman caused Zioncheck to lose his temper and he was apparently photographed dragging Ms. Young from her own apartment into the street.  Ms. Young was immediately taken to the hospital, where it was discovered she was suffering from an injury to her hip.

Mrs. Zioncheck apparently had had enough and disappeared sometime that night, causing a drunk Congressman to become morose and his depression led him to hurl glass bottles and at least one typewriter out of his apartment window.  Once again, the police arrived and this time they came with billy clubs, which they used to beat Zioncheck into submission.

Zioncheck’s behavior, if anything, became even more erratic after he was bailed out of jail.  He made a visit to the Washington Zoo to comment upon the baboons, one of whom he praised for the creature’s somersaults.  The Congressman then decided to visit the White House and in a time before a fence was erected around the presidential palace, Zioncheck arrived with a bag of assorted ping pong balls and empty beer bottles, which he claimed were gifts for President Roosevelt.

It was later that day Zioncheck was again arrested, but this time he was taken not to a jail, but a sanitarium.  There would be a trial to determine whether or not Marion Zioncheck was insane.  Zioncheck actually escaped from the asylum and was capering around the grounds when his wife Rubye arrived.  She had him transferred to a private hospital, but once again he escaped, running across the grounds before melting into the nearby woods.  Zioncheck caught a ride with an unsuspecting motorist and returned to Washington, D. C.

Zioncheck decided he would return to Seattle rather than face charges and yet another arrest.  To be sure the Congressman made no detours, he was accompanied by both a police officer and the House Sergeant At Arms all the way to Chicago.

Congressman Zioncheck was sane enough to realize his political position inside his district was deteriorating.  A host of prospective opponents had filed to run in the 1936 election.  Zioncheck actually gave a speech on the topic “Who’s Crazy” before a large audience and later announced he would not seek reelection.  Shortly thereafter, Zioncheck changed his mind and said he would be a candidate again for Congress.

Marion Zioncheck’s troubled life would end quite suddenly.  While his wife waited downstairs in their automobile, Marion Zioncheck jumped from the fifth story window of his Seattle office in the Arctic Building, his body landing just yards away from where Rubye sat.  The couple was due to attend a banquet later that evening.

Marion Zioncheck left a suicide note, yet years later some of the Congressman’s relatives could not bear to think he had taken his own life.  To this day, there are those who insist Zioncheck was pushed out of his office window.

Despite Zioncheck’s bizarre behavior, his funeral attracted some two thousand mourners, with perhaps another thousand waiting outside.  Zioncheck was buried in Seattle and finally found some peace in his troubled life.