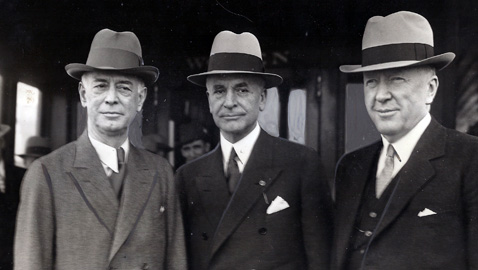 From the author’s personal collection
(From left to right) Senator Key Pittman of Nevada, Secretary of State Cordell Hull and Congressman Sam D. McReynolds of Tennessee.

By Ray Hill
Very few people remember Samuel Davis McReynolds, who was a long-time Congressman representing Tennessee’s Third District, which includes Chattanooga; yet during his time, he was a highly influential member of the House of Representatives. Quite likely, McReynolds’ career has been eclipsed by that of his successor, Estes Kefauver.

McReynolds was born in Pikeville, Tennessee in Bledsoe County on April 16, 1872. McReynolds was raised on a farm and managed to get an education, attending the People’s College in Pikeville. McReynolds later went on to Cumberland University and earned a law degree. McReynolds studied law under the supervision of James B. Frazier, later a governor and U. S. senator from Tennessee.

Returning to Pikeville in 1893 with law degree in hand, the twenty-one year old McReynolds opened a law practice. A year later, Sam McReynolds was employed as an assistant District Attorney for the Sixth Judicial District. McReynolds moved to Chattanooga and his political rise began in earnest. By 1903, he had been appointed as Judge of the Criminal Court. McReynolds, earning a good salary as judge, married in 1905. Yet tragedy struck when his wife, the former Jennie Hutchins, died on McReynolds’ birthday, April 16, 1908.

Sam McReynolds found love again and remarried on March 9, 1910. McReynolds’ marriage to Mary Davenport was by all accounts a happy marriage and their union produced a daughter, Margaret Henrietta McReynolds.

McReynolds thoroughly enjoyed the prestige of serving as a judge, but there were also hard decisions to make and the future Congressman was at the center of an ugly incident following the conviction of one Ed Johnson, who was lynched by a mob.

In 1906, Johnson, a young black man, had been tried for the rape of Nevada Taylor. Johnson was found guilty and sentenced to death. Miss Taylor had taken a streetcar on the way home and while walking toward her home, which she shared with her father, she had been assaulted. Evidently, Miss Taylor fainted during her assault and all she could recall was that her attacker was a black male and her assailant had wrapped a leather strap around her throat. A physician who treated Miss Taylor confirmed that she had indeed been sexually assaulted.

Naturally, the community was horrified and profoundly angry by the circumstances of Nevada Taylor’s assault. The Sheriff of Hamilton County, Joseph Shipp, quickly moved to investigate the crime and initially suspicion fell upon one James Broaden. Broaden fit the description of the black man Miss Taylor had described as her attacker. Yet Sheriff Shipp finally arrested Ed Johnson for the crime when it was reported Johnson had been seen with a leather strap the evening Nevada Taylor had been assaulted.

Shipp was holding both Johnson and Broaden and worrying there would be an attempt to lynch one or both of them, had the prisoners sent to Nashville where they were jailed. The sheriff’s fears were not unfounded as the next night after the prisoners had been transferred to Nashville, a mob gathered and demanded Johnson, Broaden and a couple of other black prisoners be turned over to them. The crowd was only dispersed after appeals by several prominent citizens, as well as learning neither Johnson nor Broaden were housed in the jail. Grumbling malevolently, the mob wandered away, although not before having done significant property damage to the jail.

Judge Samuel D. McReynolds presided over Ed Johnson’s trial, which began in February of 1906. Nevada Taylor testified she recognized Ed Johnson. Miss Taylor said Johnson was the same size as the man who attacked her and she recognized his hat and face. She had previously identified Johnson while he was being held under arrest. Oddly, Miss Taylor steadfastly refused to swear that Ed Johnson was her attacker; instead, she said she believed he was her attacker.

Johnson was convicted of the crime and sentenced to death.

A mob gathered outside the jail on the evening of March 19, the same night the Supreme Court had granted a stay of execution. Using an axe and sledgehammer, the mob broke down the doors to the jail, which apparently took over an hour to accomplish. The mob dragged Johnson to the Walnut Street Bridge and hung him there.

Sheriff Joseph Shipp was later tried by the Supreme Court and found that he had aided and abetted the lynch mob; Shipp, as well as several others, was found in contempt of court and received a sentence of ninety days in prison. Judge Sam McReynolds only narrowly escaped being tried for contempt himself.

That ugly episode behind him and domestically happy, McReynolds was reelected twice following his original appointment to the bench. The only thing certain about politics is its uncertainty; Sam McReynolds’ ascension to Congress came about due to a Republican tide and death. In 1920, Republicans in Tennessee enjoyed a tidal wave of success. Not only did Warren Harding carry the state, the GOP captured five Congressional seats. Several long serving Democrats were taken under by the Republican tidal wave, including Cordell Hull. The Third District was also lost to the GOP.

Moon, shocked by his defeat, resolved to vindicate himself at the polls and was an active candidate to return to Congress in 1922. He very well might have been reelected, but died on June 26, 1921. Moon’s death left Democrats in the Third District without an obvious candidate and Judge Samuel D. McReynolds became a candidate for the Democratic nomination to Congress.

McReynolds faced no opposition in the Democratic primary and Republican Congressman Joe Brown, like his father before him, opted not to run for reelection in 1922. Sam McReynolds defeated his GOP opponent in the general election and remained in Congress for the rest of his life.

McReynolds had been in Congress for a decade when Franklin D. Roosevelt was elected president in 1932. For almost the entirety of his Congressional career, McReynolds had been a member of the minority, with the Republicans in control of Congress. With the death of several incumbents in 1931, control of the House of Representatives fell into the hands of the Democrats. That same year, Sam McReynolds became Chairman of the House Foreign Affairs Committee. The 1932 elections brought a large Democratic majority as well as a Democratic president into office. Sam McReynolds became one of the more powerful members of Congress.

In fact, the Tennessee Congressional delegation wielded considerable influence in the national administration. Senator Cordell Hull was tapped by FDR to become Secretary of State; Tennessee’s senior United States senator, Kenneth D. McKellar, was one of the most senior members of the Senate and Chairman of the Post Office and Post Roads Committee and the ranking member of the Senate Appropriations Committee. Congressman Joseph W. Byrns of Nashville was a member of the House leadership and would later become Speaker of the House. Congressman E. H. Crump of Memphis was the undisputed leader of the Shelby County political machine and Democratic National Committeeman.

That same year, Congressman McReynolds joined Senator McKellar when President Franklin Delano Roosevelt signed the Norris – Hill Bill for the development of Muscle Shoals. A beaming McReynolds applauded as a grinning FDR signed his name with a flourish.

Throughout the decade of the 1930s, Congressman McReynolds would have his hands full as foreign policy became increasingly more complicated for the United States. As FDR came to power in America, Adolf Hitler came to power in Germany. With the death of German President Paul von Hindenberg, Hitler seized complete power in Germany and became a dictator. Hitler’s territorial ambitions and plan to rebuild Germany threatened peace in Europe and made many nervous, including Franklin Roosevelt. There was considerable isolationist sentiment in the United States and many of the most powerful members of Congress were themselves isolationists. Millions of Americans vividly remembered the First World War and wanted no part of another European conflict.

President Roosevelt and his allies in Congress had to carefully navigate the isolationist feeling in Congress, oftentimes leading Congressman McReynolds as one of the key members of Congress to craft compromises on behalf of the administration.

Despite the prestige of serving as Chairman of the House Foreign Affairs Committee, McReynolds remained highly politically ambitious. When Senator Cordell Hull was named Secretary of State, Sam McReynolds wanted to be appointed to the vacancy in the United States Senate. Governor Hill McAlister, a political ally of Senator K. D. McKellar and Memphis Boss E. H. Crump, appointed former Tennessee State Supreme Court Justice Nathan L. Bachman instead. Bachman, like McReynolds, was from Chattanooga, and was married to a member of the fabulously wealthy Duke family of North Carolina. Bachman’s appointment foreclosed any opportunity for McReynolds to advance to the Senate, but he did not entirely give up his senatorial aspirations.

When Senator Bachman died suddenly in April of 1937, Sam McReynolds again wanted to be appointed to the Senate. Governor Gordon Browning, who had the power to appoint a replacement for the dead Senator Bachman, spent an uncomfortable train ride to Washington, D. C. with Congressman McReynolds. Governor Browning did not appoint McReynolds, but rather chose labor leader George L. Berry instead. It was an odd choice; Berry had never been elected to anything in Tennessee and McReynolds would have had a much easier time in defending the seat in the 1938 special election. McReynolds toyed with the idea of running for the Senate in the 1938 election, but finally opted to run for reelection to the House. That same year he encountered opposition from Judge L. D. Miller, but easily won renomination and reelection.

McReynolds may well have decided not to run for the United States Senate because his health was beginning to fail. He was suffering from heart disease and following his primary campaign in 1938, McReynolds was ailing that fall. McReynolds was not getting any better and died of a heart attack on July 11, 1939. President Roosevelt wrote a public letter praising the Chattanooga Congressman for his fine personal qualities and public service. Mrs. McReynolds would outlive her husband by decades and their daughter would live to a ripe old age and become a fixture of Washington, D. C. society.

Laid to rest in Forest Hill Cemetery in Chattanooga, Sam McReynolds lies largely forgotten, a testament to power and prestige being a fleeting thing indeed.