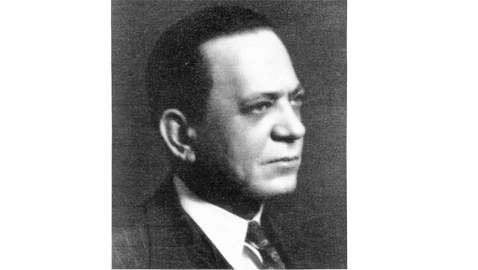 By Ray Hill
William Wirt Courtney is barely remembered today and is likely an unfamiliar name to many residents of Tennessee, but for a decade, Courtney served in Congress, serving parts of Middle Tennessee.

The future congressman was named for his father, who was in turn named for the famous lawyer, William Wirt, who was a contemporary of Thomas Jefferson and James Monroe.  Wirt was personally asked by President Thomas Jefferson to serve as the prosecutor in Aaron Burr’s treason trial.  William Wirt was appointed Attorney General of the United States by President James Monroe.  Wirt became the longest-serving attorney general in the nation’s history, serving not only Monroe, but President John Quincy Adams as well.

Wirt Courtney was born September 7, 1889 in Franklin, Tennessee.  Even as a youngster, Wirth Courtney demonstrated leadership and was elected president of his class in high school.  Courtney went on to Vanderbilt University and later to Paris, France, where he studied the law.  By the time he was twenty-two, Wirt Courtney was living in Franklin and had passed the Bar exam and was practicing law.

Courtney affiliated himself with another local lawyer and was enjoying a reasonably successful practice and was named the city judge for Franklin when only twenty-six.  His partner in his law practice, Thomas Henderson, volunteered to raise a regiment to fight in World War I.  Wirt Courtney also volunteered for service and saw action with the 117th infantry division.  After the war, Courtney came home, resumed his law practice and began raising a family.

In 1933, Wirt Courtney was elected judge of the Circuit Court of the Seventeenth District, which included his native Williamson County.  Courtney would carry the title of “judge” with him for the rest of his life.

According to historian Hudson Alexander, one of the more interesting cases heard by Judge Courtney was that of the notorious “Torture Bandit Gang”.

The advent of the Great Depression made millions of law-abiding citizens desperate and so too did it drive lawless folks to greater acts of desperation and evil brutality.  The gang was comprised of seven thieves who were led by one Buddy Bush, who had served time in prison for robbing homes in Nashville.  Bush and his gang began a crime spree that covered three Tennessee counties: Williamson, Maury, and Davidson.  Preferring remote farmhouses, the gang would target those owners whom they believed hoarded sums of money.  Once inside the home, after usually being admitted on some other pretext, the gang would beat the helpless victims, demanding to know where they kept their money.  If that didn’t work, they resorted to torturing their victims for the information.

One victim was a 78-year-old widow who was robbed of her pocketbook and $60 in front of her daughter and grandchildren.  Before leaving Josephine Ellis’ home, the thugs pistol whipped Mrs. Ellis’ thirteen year old grandson.  Mrs. Ellis was less hysterical than mighty mad after the gang had departed and she telephoned her nephew, George Redmond, who also happened to be a detective for the Nashville Police Department.  Detective Redmond began a relentless pursuit of the bandits and a witness was discovered who revealed he had seen Buddy Bush’s car parked at Mrs. Ellis’s home.  Bush was arrested and actually convicted of robbing Mrs. Ellis, as well as assaulting her grandson.

Unfortunately, Buddy Bush remained a free man pending his appeal of his conviction.  The worst was yet to come.  On September 14, 1934, Buddy Bush and his thugs arrived at the home of Sam McCall.  The gang believed Sam McCall had withdrawn $3,000 from the bank, with which he intended to purchase a farm.  Bush and his cohorts intended to steal the money, but McCall was no coward.  McCall refused to admit them into his home and a gun battle ensued.

The gang finally forced their way into the McCall home, but Mrs. McCall flung her purse out the window, which contained $250.  Both of the McCalls were quickly overpowered and the gang proceeded to torture Mr. McCall by burning his bare legs with rolled up newspapers, which they had set on fire.  As it turned out, McCall had already purchased the new farm and all the money was gone save for the $250 tossed out the window with Mrs. McCall’s purse.  Enraged, Buddy Bush and his gang beat Sam McCall so badly, they finally left, thinking him dead, but not before they had retrieved Mrs. McCall’s purse.

Buddy Bush owned a disreputable place called the Dew Drop Inn and when one of his confederates was arrested by the police after a routine traffic-stop violation, the thug offered up his accomplices, implicating Bush.  Buddy Bush knew he was caught and in turn offered to confess all his crimes to Detective George Redmond.  Rightly suspicious, Redmond showed up at the Dew Drop Inn accompanied by a passel of policemen.  As Redmond had feared, Buddy Bush had no intention of returning to prison and opened fire.

The remaining members of the Torture Bandit Gang were rapidly captured and arrested and put on trial in the courtroom of Judge Wirt Courtney.  All were found guilty and the least of them received a fifteen year prison term.

Judge Courtney was considered stern in meting out justice.  Wirt Courtney was one of the first judges in Tennessee to take drunk driving seriously and he gave harsh sentences to those appearing in his court charged with driving under the influence.  The judge himself enjoyed more than a drink or two, but had little tolerance for those who drank and drove.

One case heard in Judge Courtney’s courtroom stunned the strict jurist.  A jury trial was held for five white men accused of murdering a black man.  Courtney was presiding at the trial in Cheatham County and the jury acquitted the defendants, causing Judge Courtney to look at the jurors and say, “I am astounded at your verdict.”

The judge then promptly had warrants drawn charging conspiracy to inflict corporal punishment against the five men.  The men had admitted to killing Baxter Bell, but claimed they had done so in self-defense.  They did not explain how Bell had been seized from Dickson County officers – – – by five white men.  Judge Courtney’s issuing warrants, meant the five were not freed after having been acquitted, but rather returned to jail.

Courtney had long been active in Democratic politics in Tennessee and had been the state campaign manager for Treasurer Hill McAlister’s gubernatorial bid in 1928 against incumbent Henry Horton.  Courtney was allied with the faction tied to Tennessee’s senior United States Senator, Kenneth D. McKellar.

When Congressman Clarence W. Turner died of a heart attack on March 23, 1939, Wirt Courtney became a candidate to succeed him in a special election.  Courtney faced the late Congressman’s widow in the election and narrowly won the Democratic primary.

Wirt Courtney made his “maiden” speech in Congress, urging the House to repeal the arms embargo that had restricted American foreign policy for much of the decade.  Several of Courtney’s Tennessee colleagues “ran up” to the freshman congressman to congratulate him.  Even Republican Congressman J. Will Taylor termed it “a splendid talk.”

Congressman Courtney served on the House Foreign Affairs Committee and in the spring of 1942, spoke in Bristol, Tennessee, where he predicted there would be another “League of Nations” following World War II.  Courtney’s prediction was accurate as the United Nations came into being in 1945.

Courtney got himself in a bit of hot water with K. D. McKellar in 1947 when he told newsmen the senator had said he could not support junior senator Tom Stewart for reelection the next year.  An indignant McKellar denied he had made any such statement, saying he had not committed himself to anyone, but would announce whom he would be for at the appropriate time.

By 1948, most of the veterans had returned from World War II and more than a few ran for Congress.  Courtney drew an eloquent and charismatic opponent in James “Pat” Sutton.

Sutton was from Lawrenceburg and had a sterling war record, which impressed the voters.  The thirty-three year old veteran of the Navy had won not only a Distinguished Service Cross, but the Purple Heart.  Pat Sutton came home to a hero’s welcome and faced off with the incumbent, who was nearing sixty.  Sutton was an able campaigner and much more conservative than Congressman Wirt Courtney, who was an old-time New Deal liberal.

The finish of the election was close; Congressman Courtney carried seven of the thirteen counties inside the Seventh District, but lost by exactly fifty-eight votes out of more than forty thousand ballots cast.

Wirt Courtney came home to Franklin, opened a law office and continued to practice law and enjoyed his status as one of the community’s elder statesmen.  He would live long enough to see Pat Sutton attempt to topple Senator Estes Kefauver in 1954.  After running a well-funded campaign, Sutton lost badly to Senator Kefauver.  Having left his seat in Congress to run for the United States Senate, Sutton came back to Tennessee and was elected Sheriff of Lawrence County.  Sheriff Sutton remained highly popular in his home county but ran into some serious legal difficulties when he and his brother were indicted by a federal grand jury for counterfeiting in 1963.  Eventually, Pat Sutton pleaded guilty and according to one obituary, he served ten months of a year-long prison sentence after having violated the terms of his probation.

Sutton had tried to reclaim his seat in Congress in 1956, facing his successor, Ross Bass, in the Democratic primary.  Bass beat Sutton decisively and the former congressman opted to run for Sheriff in his home county.  The two would clash one last time, a last hurrah for the both of them.  Bass and Sutton both announced for Congress in 1976 to face Republican incumbent Robin Beard.  Sutton was not a viable candidate after his colorful past and Bass beat him badly, but lost to Congressman Beard.  It was the last campaign for both of the old political warriors.

Wirt Courtney never attempted to make any kind of political comeback.  He contented himself with a successful law practice, but his health began to deteriorate.  He died in a hospital April 6, 1961 after a “long illness.”

The former congressman’s death was little more than a footnote outside his own community of Franklin.  Power, like all earthly things, is fleeting and fame even more elusive.