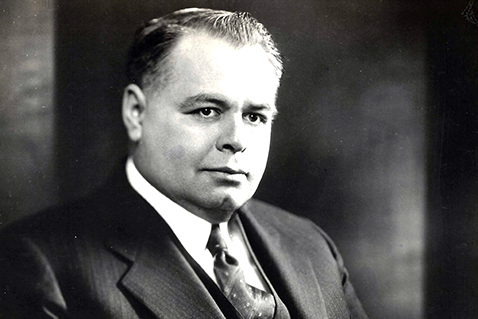 Short, chunky, and bespectacled, Jesse Wolcott looked more like a small town lawyer or accountant than the ideal of a congressman. Yet the framers of the Constitution meant for the House of Representatives to be the people’s House and one can frequently glance through a pictorial directory of Congress and see the membership really does reflect the diverse communities that comprise the United States of America. To look at Jesse Wolcott during his congressional years, one would never have suspected he had fought in the First World War or that he had earned his way through college by playing the drums.

Wolcott always chuckled when remembering his constant playing with various bands and orchestras in Michigan had paid his college tuition and room and board to go to law school. A month after having graduated from law school, Jess Wolcott had the opportunity to visit Russia to attend a concert at the Russian Cultural Institute in Moscow. Wolcott became “fidgety” and finally offered to join in and play the drums. At first, the Russian hosts were politely skeptical and merely smiled. Yet once he banged out and had “wowed” the Russians with “Twelfth Street Rag”, they enthusiastically applauded their approval.

It was during the First World War Jesse Wolcott met his wife, Grace. Wolcott had just won a commission in Officers’ Training Camp. His first assignment was to get some men to Camp Lee, Virginia, which he did, but upon his arrival discovered he was out of money. Jess Wolcott borrowed $2 from “a pretty clerk” in an office in 1917. Ten years later, they were married.

When Jess Wolcott first arrived in Congress, Herbert Hoover was the President of the United States, and the Republicans still maintained the most slender of majorities. That majority slipped away with the death of several incumbents as Democrats won previously held Republican seats in Congress. Franklin D. Roosevelt routed Hoover in the 1932 election when the issue was the Great Depression. Roosevelt and the Democrats swept both Houses of Congress and the loss of many Republican seats gave Congressman Jesse Wolcott early seniority in the House of Representatives.

“I was called a radical when I first went to Congress,” Wolcott recalled years later. “Some of my GOP colleagues would hardly speak to me.”

Yet, Harry Truman had once snapped that Congressman Wolcott was a “mossback” Republican.

Wolcott eventually wielded considerable influence, especially on his side of the aisle of the House. It was Jesse Wolcott who, according to TIME magazine, had “corralled an unexpected 61 GOP votes” for a post Second World War loan to a faltering Great Britain. That was after a plea from House Speaker Sam Rayburn who had left the Speaker’s dais to stand on the floor of the House and cry, “It’s in my heart and I am going to say it. I do not want Western Europe – – – England and all the rest – – – pushed further into an ideology that I despise.” Rayburn was referencing Communism.

Jesse Wolcott was well able to argue his point of view and had been one of the leaders of the opposition when the United States Senate proposed to give Jesse Jones, administrator of the New Deal’s Reconstruction Finance Corporation an additional $1.5 billion to loan out. Wolcott had gotten to his feet on the floor of the House and roared, “This bill would . . . make it possible to establish a fascist state in the U. S. It would give the President and the Federal Loan Administrator the power to do anything they saw fit to do so long as it was incidental to the defense program.”

Jones, a millionaire businessman from Texas whom FDR privately referred to as “Jesus H. Jones”, was popular with a great many members of Congress, who generally trusted the Texan to expend money wisely. That argument had occurred in June of 1941 when war clouds increasingly gathered over American skies on both sides of the world. The Japanese Empire was well on its way to its conquest of China and other spots in Asia, while the European powers were struggling to fend off the Nazi legions of Germany’s Adolf Hitler.

Wolcott was also a member of a special House Committee, chaired by Tennessee Congressman Carroll Reece, which investigated tax-exempt institutions. That service brought about a conflict with Dean Rusk, a future Secretary of State, who was the president of the Rockefeller Foundation. Congressman Wolcott had signed a committee report which charged the Rockefeller Foundation and others with “having directly supported ‘subversion’.” Rusk cried the Republicans on the special committee had acted “without support of trustworthy evidence.”

Jesse P. Wolcott was an orthodox Republican, a man who prized honesty and kept his word when he gave it. Yet, Wolcott was a thoughtful man who maintained an independent streak and was never deterred from what he considered to be right for the people he represented. Wolcott, a resident of Port Huron, represented a more rural district in his home state of Michigan and was a member of the Farm Bloc in Congress. Wolcott was also a high-ranking member of the House Banking Committee and had a head for figures. Jesse Wolcott proved to be a valuable ally to have in a fight and was also to be respected and feared as an opponent. Congressman Wolcott was a determined opponent of New Deal price controls.

When the Republicans won control of the House of Representatives following the 1946 election, Jesse Wolcott became the Chairman of the Banking Committee. The next couple of years brought about a housing crisis in the country as veterans returned from the war, married and produced children. President Harry Truman announced, “Our housing shortage is almost a fatal one.” Truman told a story involving a man and his wife, their infant child and their dog who couldn’t find a place to live in Washington and weren’t even allowed to remain in their car in a parking lot. “Children and dogs are as necessary to the welfare of this country as is Wall Street and the railroads, or any one of them.”

Congressman Wolcott worked hard to push a measure intended to deflate inflation in 1948 when Republicans held the majority in Congress. President Truman sneered it was nothing less than a “feeble response.” Truman famously campaigned against the “do-nothing 80th Congress.” The 80th Congress actually accomplished quite a few important things, but it didn’t stop Harry Truman from flinging the accusation, which stuck in the minds of many voters.

Critics of Jesse Wolcott accused the congressman of having strong ties to the real estate industry. Certainly, Wolcott was a foe of public housing. Whatever his critics might say, Jesse Wolcott remained popular with the only folks who mattered: the people of his congressional district.

Wolcott had been the prosecuting attorney of St. Clair County when he challenged Congressman Louis Cramton for the Republican nomination in the 1930 GOP primary. The outcome of the primary turned out to be a nail-biter; Wolcott won the Republican nomination by only twenty-five votes. Wolcott’s issue during the Republican primary was urging a referendum on the Eighteenth Amendment to the Constitution, which had to do with the prohibition of spirits and alcoholic beverages.

Cramton ran again in the 1932 primary and Wolcott won again, by a bigger majority. Jesse Wolcott remained in Congress until his voluntary retirement in 1956. When he announced he would not seek reelection in 1956, Congressman Wolcott said that “any conscientious member of Congress” should always obey his oath of office but if one served the people faithfully it would indeed “take its psychologic and physical toll.”

During his time in Congress, Jesse Wolcott’s independence caused some of his Republican colleagues to complain he was too liberal while Democrats raged he was a hidebound conservative. Although a bitter critic of price controls, Congressman Wolcott was against the immediate removal of the measures following the end of the Second World War. Wolcott knew that to do so would likely have grave economic consequences. Wolcott’s position was contrary to that of many inside his own party, but the congressman insisted upon a gradual relaxation of the price and rent control policies. As a result, Jesse Wolcott received the Collier Award for Distinguished Congressional Service. That particular prize carried a cash award of $10,000, a very substantial sum at the time. The congressman donated money to Michigan State University for scholarships for students.

Jesse Wolcott only won 52% of the votes cast in the 1954 election, the closest general election of his twenty-six years in Congress. It is entirely possible Wolcott sensed the political demographics were changing, or he may have simply grown tired while in Congress.

Wolcott retired in 1956 and young Robert J. McIntosh, a thirty-one-year-old Republican, was elected in his stead. McIntosh, a protégé of Wolcott, served only one term and the seat fell into the hands of a Democrat, James O’Hara and stayed there for years. Wolcott had intended to enjoy his retirement but was appointed to head the Federal Deposit Insurance Corporation by President Dwight D. Eisenhower. Wolcott had worked hard to pass the legislation creating the FDIC, as prior to the New Deal, bank deposits had not been federally secured, or secured at all. When thousands of banks failed during the Great Depression, many depositors lost every cent they had in the world. “I like to think of FDIC as probably the greatest institution ever conceived by man for his own safety and protection, and the protection of bank depositors,” Wolcott once said.

“I do not think there is any organization in the world which has done so much to establish and perpetuate and maintain an economy such as that which makes America the greatest nation in the world,” the former congressman added.

During Jesse Wolcott’s time as a director of the FDIC, the insurance premiums collected from banks were more than enough to cover “the very few failures occurring among the banks.”

Wolcott retired a second time in 1964. The former congressman and his wife kept their home in Chevy Chase, Maryland but also bought a summer home in Port Huron. The couple was anxious to spend more time with their four grandchildren. Wolcott’s time in public office was forty-two years, an astonishing period of time. Unfortunately, Wolcott did not get to relax and fish as much as he would have liked. Mrs. Wolcott reported the seventy-two-year-old former congressman was ailing a year after his retirement. Mrs. Wolcott acknowledged her husband had been ill since the beginning of 1965 and in November he had been in bed for about 10 days. Evidently, the former congressman had suffered a stroke and was bedridden.

In January of 1967, St. Clair County Republicans gathered together and one of the resolutions they passed was an appreciation of the service rendered by the ailing former congressman. It was a small effort to remind Jesse Wolcott he had not been forgotten by the local folks a decade after he had retired from the House of Representatives.

It was a kind gesture made by friends for Jess Wolcott. Apparently, Wolcott never recovered from the stroke he suffered in 1966. He died on January 28, 1969. Stanley H. Church, who had known Wolcott well and described the former congressman as “a very personal friend” lamented the loss. Church said he had known Wolcott for forty years and attributed Wolcott’s success to “his own personality and efforts.” Evidently, Wolcott wrote letters “of cheer and encouragement” frequently to those friends who needed them. In a letter to the editor of a local newspaper, Stanley Upchurch remembered Wolcott:

“Jess was a man who excelled in everything he tackled. Always extremely modest, and always a smile for his multitude of friends and in fact everyone he met. He is going to be missed.”

Church added, “What this country needs is a few more Jesse Wolcotts.”