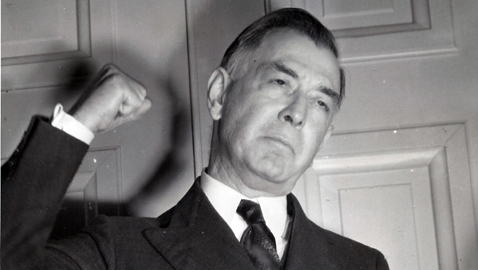 From the author’s personal collection.
Senator Key Pittman of Nevada

Colorful characters are as much a part of the old West as tumbleweeds.  Key Pittman was certainly a colorful character.  Pittman caused a stir by using his silver handled revolver to shoot out streetlights while on a drinking spree.  In fact, Key Pittman’s death would spawn a rumor, which persists to this day.  Supposedly, Pittman died days before the 1940 election when he was seeking a sixth term to the United States Senate.  According to legend, Pittman’s body was carefully concealed and kept on ice in a bathtub until the election results were tallied and voters would never realize they had elected a dead man to office.

A colorful story, but untrue.

Pittman rose to the heights of prominence, eventually becoming President Pro Tempore of the United States Senate and serving as Chairman of the prestigious Foreign Relations Committee during the first and second administrations of Franklin D. Roosevelt.  Yet over time, Pittman’s alcoholism would mar his career and end his life prematurely.

Born in Vicksburg, Mississippi on September 19, 1872, Pittman retained the drawl and bearing of a Southern gentleman.  Tall and lean, Key Pittman looked every inch the statesman, especially before alcohol took its toll.  The child of well-to-do parents, Key Pittman was educated by private tutors before attending Southwestern Presbyterian University in Clarksville, Tennessee.

Although he had earned a law degree, Pittman embarked for the wilds of Alaska to make a fortune, as did many others, during the “gold rush”.  Rather than studying law books, Pittman lived in primitive conditions, performed backbreaking manual labor and lived the life of a miner, all in the hope of striking it rich.

In 1901, Key Pittman and his bride left Alaska and settled in Tonopah, Nevada.  Tonopah was a mining town and while Pittman speculated in mining ventures, he also practiced law.

Pittman was well known enough to be the Democratic candidate for the United States Senate from Nevada in 1910.  Key Pittman had been pressed to run and Nevadans voted in a nonbinding election, which George Nixon won.  Despite a Democratic majority in the legislature, Pittman insisted that Nixon be elected to the Senate, as he had been the popular choice of the people of Nevada.

It was the only election he lost in his long career.

When Senator George S. Nixon died in Washington, D. C. hospital of spinal meningitis on June 6, 1912, Governor Tasker Oddie had to appoint a successor.  Governor Oddie appointed William A. Massey to fill the vacancy.  Massey was a former Justice of the Nevada Supreme Court and while the legislature still elected United States senators, the newly appointed legislator readily agreed to abide by the results of a popular election.   Key Pittman ran and defeated Massey by 89 votes and was elected to the United States Senate by the legislature.

Pittman was reelected to a full six-year term in 1916 and would remain in the United States Senate until his death.

Nevada’s politics was complicated and until the advent of the Great Depression, most elections centered around candidates supported by the “bipartisan machine”, which was comprised of a select group of wealthy and powerful Republicans and Democrats, most notably financier George Wingfield.  Key Pittman was highly respected by the bipartisan machine and although a Democrat, usually had the support of the Republican Wingfield.

Coming to the Senate with the election of Woodrow Wilson, Key Pittman was a strong supporter of the Wilson administration and got along quite well with the president.  Pittman’s fondness for President Wilson was hardly diminished by his control of federal patronage in Nevada.  Controlling patronage in a sparsely populated state like Nevada was a powerful tool and gave Pittman enormous power and leverage in his home state.

Pittman loyally supported Wilson’s League of Nations and with increasing seniority, was highly regarded by his colleagues and the media of the time.  Key Pittman was considered to be a highly skillful politician and U. S. News & World Report concluded the Nevada senator was “One of the three best strategists among Democratic congressmen.”

The profile of Senator Key Pittman in U. S. News & World Report was highly complimentary, noting the Nevadan was the sort of man “who never did a bad job of anything.”  While admitting Senator Pittman was “not a creative genius or a hard worker,” he was nonetheless a “good legislator.”

The assessment of Pittman as a shrewd political observer and strategist was evident when the senator was asked by an inquiring reporter why he had never sought to be nominated for the vice presidency.

Senator Pittman dispassionately replied, “No man from the intermountain states who loyally fights to protect the peculiar interests of those states can expect to be nominated for vice president.

“The chief industries of those states are mining, stock raising and reclamation.  There are only nine states in this group.  The rest of the states purchase our western products and they desire to purchase them as cheaply as possible.”

Pittman went on to tell the reporter, “Anyone who supports silver in a large portion of the rest of the country is considered a crack pot.  Without regard to friendship or respect, no man from the intermountain country can receive the nomination of his party even for vice president.”

It was a cool, clear, and accurate assessment.

Pittman’s drinking may well have had much to do with his problematic relationship with his wife, Mimosa.  Clearly deeply in love with his wife, Pittman was tortured by the intricate Mimosa who could be extraordinarily cold.  The Pittmans had no children and when in high disfavor with Mimosa, the senator tended to drink.  When he drank, Pittman tended to go on a bender.

Despite his problem with alcohol, Pittman remained quite popular with the folks back home.  He was reelected in 1922 and 1928, which was a very good year for most Republican candidates.  Pittman managed to increase his margin of victory with every passing election.

The election of 1932 would bring Key Pittman to the peak of his influence, but his downward spiral would quickly follow.  Pittman’s Republican colleague, Tasker Oddie, was expected to be reelected, despite the enormous unpopularity of President Herbert Hoover.  Oddie was facing Pat McCarran, something of a perennial candidate who had lost one campaign after the other.  Senator Oddie had the support of the bipartisan machine and Pittman focused virtually all of his energy behind the candidacy of Franklin Roosevelt.  If the Democrats took control of Congress, Pittman would become Chairman of the Senate Foreign Relations Committee and he expected to a great deal to do with Roosevelt’s foreign policy.

To the surprise of almost everyone, Tasker Oddie lost to Patrick McCarran and Pittman was to find the fiery little Irishman difficult to deal with.  McCarran was stubborn to a fault and a political brawler.  Pittman, delighted by FDR’s election, soon found himself embroiled in numerous patronage squabbles with his junior colleague.  Senator Pittman found it easier to give in than fight and McCarran was soon building the most formidable political machine in Nevada’s history.  The McCarran machine would eclipse and surpass the old bipartisan machine.

With increased responsibility and woes forced upon him by his obstreperous colleague, Pittman’s drinking increased.  Sailing across the Atlantic to attend the London Economic Conference in 1933, Pittman was evidently drunk much of the time.  Still, Pittman managed to promote the cause of silver, which was a cornerstone of the Nevada mining industry.  Pittman’s proposal at the London conference was an agreement with eight other nations that helped to stabilize the world silver market.  It also committed the government of the United States to purchase a huge amount of silver well above the market price.  While it may have been a poor economic policy for taxpayers, it boosted Pittman’s popularity in Nevada even higher.  Pittman won a smashing victory in 1934 for a fifth term, defeating George W. Malone, who would finally reach the U. S. Senate in 1946.

Still, FDR was chagrined and dismayed when Senator Pittman informed the president he was postponing consideration of the Foreign Relation Committee’s revising the Neutrality Act after Adolf Hitler had seized the entirety of Czechoslovakia.

Pittman, to the astonishment of many, calmly announced, “the situation in Europe does not seem to merit any urgent action.”

Pittman also profoundly embarrassed the Roosevelt administration when he abruptly issued a foreign policy statement declaring American did not like the Japanese government well before the attack on Pearl Harbor.  Senator Pittman also noted Americans did not like fascist governments.

Key Pittman’s heavy drinking was no secret either in Washington or Nevada.  When an announcement was made the senator was under the weather, many presumed Pittman had been drinking too much.

By the time Key Pittman sought reelection in 1940, he had gone from a functioning alcoholic to the depths of alcoholism.  Pittman’s drinking had steadily increased and he had wet himself in front of an audience while speaking.  His campaign was well funded and largely run by others.  Pittman’s campaign ran ads that modestly proclaimed “Key Pittman the greatest in a long line of national eminent United States Senators to represent Nevada in Washington…”

As the campaign came to a close, his strength was failing and his managers thought it better he remain in seclusion.  Just before the election, Senator Pittman, following excessively heavy drinking, was found unconscious and was hurried to Washoe General Hospital in Reno, Nevada.  Pittman had suffered a serious heart attack and doctors told those closest to the senator there was little hope for recovery.  The Pittman campaign immediately issued a statement that the senator had exhausted himself from overwork and campaigning.

Mimosa Pittman flew to Reno and noted in her diary that she found her husband conscious and “happy.”  A heart specialist, Dr. A. J. “Bart” Hood, was summoned from San Francisco and promptly somberly pronounced Senator Pittman would never live to return to Washington, D. C.  Five days after winning a sixth term in the U. S. Senate, Key Pittman continued to grow weaker and finally his heart gave out and he died.

By the time he died, only two senators had served longer than Key Pittman.

The usual tributes poured in from Pittman’s colleagues and even Senator McCarran, who was himself confined to a hospital, declared he was “shocked” by the senior senator’s death and murmured some appropriate words of sympathy.

For all his faults, Key Pittman was well liked and respected by the people he served.  Governor Edward P. Carville declared Pittman’s funeral service a state occasion; the services were held in the Reno Civic Coliseum.   Mrs. Pittman placed her husband’s body in a simple casket, but some grateful Nevadans wanted to affix silver handles to the coffin along with a plaque reading, “Silver Key Pittman – – – the man who raised the price of silver.”

Key Pittman worked assiduously on behalf of the interests of the state and people he represented, yet he likely achieved far less than he could have had he not been victimized by alcohol.  Intelligent, able, articulate and shrewd, Key Pittman was also all too human.