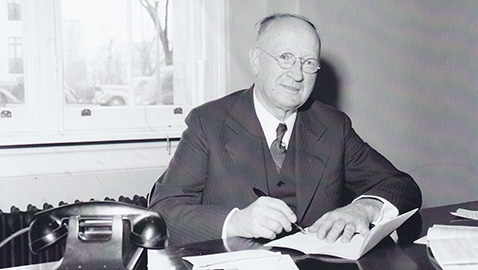 By Ray Hill
“I’m guilty,” were the only words spoken by William “Billy” Strickland, a fresh-faced twenty-eight year old when he revisited the Knox County Court House.  Strickland had been engaged in a bitter battle for custody of his four year-old son with his pretty twenty-three year-old wife, June.  Six months after the case, which involved a former congressman, three of the four principals in the trial would be dead.

June Strickland had hired “Judge” John Jennings, Jr. as her attorney to fight for custody of her son.  Jennings had represented Tennessee’s Second Congressional district in the U. S. House of Representatives from 1939 until 1950 when he had been defeated by Howard H. Baker.  Jennings had been superintendent of the Campbell County schools and a judge of the Criminal Court and retained the title for the rest of his life.  John Jennings, Jr. was an excellent speaker, a raconteur of some ability, and a good lawyer.  When the case began in 1955, Jennings was seventy-four years-old and successful.  The former congressman owned a very nice home on Kingston Pike and operated two “farms”, although he would be the first to confess he rarely went over the accounts as he didn’t want to know how much money he was losing.

The loss of his seat in Congress had been a bitter blow, but Jennings gamely came home to Knoxville and resumed his law practice.  The Strickland case would be the last case he tried as a lawyer.  Jennings had been successful in representing Mrs. Strickland and she had been awarded custody of her son, but her husband would have the last word.  As June Strickland walked to the entrance of a parking lot on South Gay Street near Main Avenue, she should have been perfectly safe.  There were “hundreds” of men who were delegates to a convention of the Fraternal Order of Police which were pouring out of the Bijou Theater.

Like many young couples, Billy and June Strickland had their problems, which had been aggravated by Billy’s jealousy of his wife.  Billy Strickland was convinced his wife was seeing another man.  There was an altercation between them on July 20, 1955 and June filed an assault warrant against her husband and left the home they shared together.  During the custody hearing, June Strickland said she left their home in Wilmington, North Carolina after her husband beat her on July 20.  Billy seemed contrite and asked to take their son, David, to the coast for a fishing trip.  June Strickland agreed, not knowing Billy brought the boy to the home of his sister in Knoxville.

David Strickland was described by Mrs. Nellie E. Johnson, superintendent of the Knoxville Children’s Home as a “sensitive” boy with “brown curly hair, large brown eyes and dimples” and concluded the child was “cute as a button.”

That was the beginning to the custody battle which ended so terribly for all concerned.  Ten minutes after winning custody of her child, June Strickland lay dead in a parking lot in a pool of her own blood.  Billy claimed he had waited for his wife near her parked car because he “wanted to talk to her.”  June was with her parents, Mr. and Mrs. Jonas A. Pugh and her sister, Betty Lou, when they noticed Billy Strickland.  June and Betty Lou turned to walk away when Strickland pulled out a 38-caliber gun and fired a single shot, which struck Mrs. Strickland in the head, killing her instantly.

A tearful Betty Lou Pugh said, “June didn’t say a word.  She slumped to the ground as soon as the shot was fired.”

When Mr. and Mrs. Jonas Pugh followed the ambulance carrying June the few blocks to Baptist Hospital, Coroner Roy Hickam was there awaiting them.  The Coroner sadly informed the Pugh family June’s body had already been taken to Berry Funeral Home.  Mrs. Pugh screamed once and began to tumble to the floor before she was caught by her husband and surviving daughter.

Several of the Fraternal Order of Police delegates, horrified, ran after Billy Strickland, who was apprehended by an Ohio detective and officers from the Knoxville Police Department.  Strickland had been nonchalantly walking away from the scene of his crime and offered not the slightest resistance.  Pearl R. Hollis, a forty-two year-old detective visiting from Reading, Ohio saw Billy Strickland walking away as a woman screamed, “He shot her!”  Billy Strickland never altered his pace as Hollis barreled after him.  Billy still held the gun in his hand.

“I called to him to stop, but he continued on, still walking,” Hollis recalled.  “I followed and overtook him and told him to give me the gun.”

“I shot her,” Billy Strickland told Pearl Hollis.  “I’m not trying to run away.”

Hollis admitted he worried the young man might turn and shoot him, but Billy Strickland merely handed over the gun without a word.  Hollis and two Knoxville detectives escorted Billy to the Monroe Hotel, which was next door to the Bijou Theater to wait for a police cruiser to arrive.  Detective R. C. Crawley asked Billy why he had killed his wife and Strickland replied because “she took my boy away from me and was running around with other men and telling lies about me.”

Murder had most certainly been on Billy Strickland’s mind.  Strickland said he had planned to kill June as early as August 2 when he and David had flown to Knoxville.  Yet, he claimed he had hoped for a reconciliation with his wife.  “I started toward her to talk to her,” Strickland told a reporter from his jail cell.  “She turned and started walking away.  I lost my head.”

“I feel bad about it,” Billy Strickland added.  “I wish it hadn’t happened.”

Strickland explained the trouble between he and June had erupted over a letter she had written while visiting Knoxville in June.  Billy claimed he asked his wife about the letter to another man and she had insisted there was nothing “wrong” about the letter.  Billy disagreed.  “It was a love letter,” he said.

Once home in North Carolina, Billy said he “started checking” and discovered “they had been going together for six months.”  Strickland said the other man “had even been to my house while I was in the hospital to have a tumor removed from my shoulder.”

“I found out they had been together when I had been out fishing.  I went fishing several times at night,” Billy explained.

Strickland told the reporter from the Knoxville News-Sentinel he had talked to the other man who had initially denied any relationship with June, but admitted the affair after Billy and his wife had separated.

Billy Strickland had thought his home had been a happy one before he found out about the alleged affair.  June and Billy Strickland apparently were living a life that was common for most Americans during the 1950s.  They had their own home, had recently bought a new car and unusual for a woman at the time, both Billy and June worked.  Once separated, Billy quit his job in Wilmington and came to Knoxville where “wrote, wired or phoned” June every day.  Billy tried to convince June to move to Knoxville and on August 5, she telephoned to say she was headed to Knoxville and told him to wait for her to arrive.  Strickland said the “next thing I knew she had filed a habeas corpus (writ) for our son.”

Strickland claimed he had been desperate to talk to his wife, but couldn’t discover where she was staying in Knoxville and she refused to speak to him once they were inside the courtroom.

In the courtroom as Billy Strickland admitted his guilt and the details of his murder of June were recounted, the Pughs looked sadly at the empty chair that had been occupied by their daughter during the nine days of the custody trial.

Judge Kelly had announced his decision awarding June Strickland custody of David and before he had finished his remarks, Billy Strickland bolted from his counsel’s table and was seen going down the courthouse steps.  It was 10 or 15 minutes later before June Strickland left the Court House with her family.  Among the remarks made by Judge John Kelly in his courtroom was the observation June had been the “victim of a progressive violent rage and unrestrained, uncontrolled, and seething and violent jealousy.”  Kelly mentioned testimony taken during the trial that Mrs. Strickland had been forced by her husband at gunpoint to pen no less than three suicide notes and confess to adultery.  That same day Billy beat June “unmercifully and broke her ear drum.”  Judge Kelly said William Strickland was a fugitive from justice as he had fled to Knoxville before facing a charge in Wilmington for having beaten his wife.

Neither of the Stricklands looked especially happy that last day of the court case and, as it turned out, of June’s life.  Billy contented himself with glaring at Judge John Kelly while June “looked as if the whole matter was distasteful to her.”

“There is not a court in the land that wouldn’t rather hear 100 damage suits than try one custody case,” Judge Kelly growled.  “You have to tear the heart strings from somebody when you are in no way responsible for it.”

Kelly opined Billy Strickland wanted his son solely to deny his wife custody to punish her for her infidelities.  Mrs. Strickland, Kelly reasoned, wanted the boy because of Billy’s brutality and temper.

Captain Carl Bunch of the Homicide division said, “Strickland made up his mind to kill his wife on Aug. 6, when she came here to get the child back.”  Bunch said Billy Strickland had been carrying the gun “every day since the custody hearing had started.”  In fact, Billy had the pistol in his pocket while sitting in the courtroom.  Captain Bunch added the murder of June Strickland was the first killing on Gay Street since a man had stabbed his wife to death in front of the Woolworth’s store fifteen years earlier in broad daylight.

Little David Strickland had been taken to the Children’s Home on Cecil Avenue where he remained during the custody fight between his parents.  David remained unaware of his mother’s murder when Judge John Kelly granted custody to his maternal grandparents.  The little fellow had been “overjoyed” to see his grandparents and Aunt Betty Lou.  David hugged his grandmother and began to cry softly.  “Now don’t cry, honey,” Mrs. Pugh soothed, “grandmother is here.”  Apparently, Mrs. Pugh was a strong woman, as she never once lost her composure.  Before leaving for his grandparents’ home in Wilmington, David Strickland turned to the other children at the home, smiled “broadly and waved goodbye to his little friends and the attendants at the home.”

Jonas Pugh when asked by a reporter, said he and Mrs. Pugh would be honest with David and tell the boy his mother was dead.

Sadly, within six months of the trial, the two attorneys representing the Stricklands would be dead.  John Jennings would never recover from gall bladder surgery and died from complications on February 27, 1956.  Andrew J. Hartman, the attorney for Billy Strickland, had been a chairman of the Knox County Republican Party and an assistant attorney general, died in a bizarre accident in his downtown law office.  Hartman had been cleaning a pistol when it had discharged, struck him in the head and he died 25 hours later.  William Strickland went to prison for having murdered his wife.

One can only hope David Strickland grew up to have a happier life than his parents.