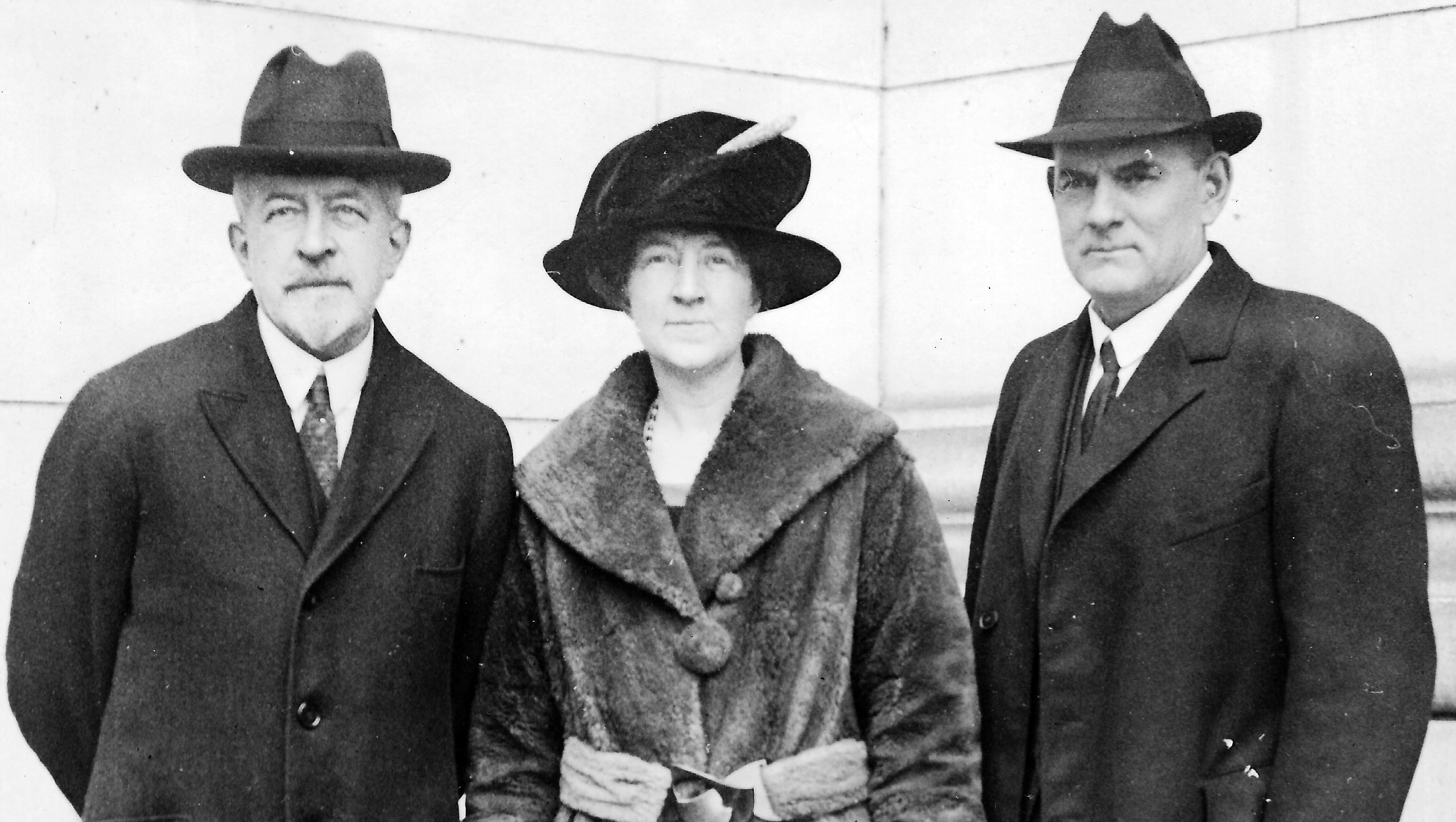 A Tennessean on the U.S. Supreme Court

I daresay few of my readers recall a Knoxvillian once sat on the Supreme Court of the United States.  Judge Edward Terry Sanford served as an Associate Justice of the Supreme Court from 1923 until his unexpected death in 1930.  Sanford had been the judge of the Eastern District of Tennessee, by virtue of appointment by President Theodore Roosevelt.

The story of Sanford’s nomination to the high court is an interesting one and deserves to be retold in these pages.  The Republicans held a comfortable majority in the government in 1923, although the GOP had seen losses during the 1922 midterm elections.  There were fifty-three Republicans occupying seats in the United States Senate in 1923, following a loss of six Senate seats in the 1922 elections.  The President of the United States was Warren G. Harding of Ohio, a kindly and affable man who would forever be associated with his supposed affair with a mistress and other scandals that came to light after his death.  Yet it was a Democrat who quite likely did more to help along Edward T. Sanford’s nomination to the Supreme Court than any other single individual.

Tennessee’s senators were Democrats; John Knight Shields was a crusty, oftentimes quarrelsome sixty-five year old native of East Tennessee.  Shields was a small man with hooded eyes and a drooping moustache.  Shields was a former Chief Justice of the Tennessee Supreme Court who hankered for an appointment to the U. S. Supreme Court himself.  Shields was the last man to be elected to the United States Senate from Tennessee by the General Assembly.  John Knight Shields had been the beneficiary when Tennessee’s Democratic Party tore itself asunder over prohibition.  Shields was elected to the Senate in 1913 as part of the “fusionist” movement, which was a combine of “Independent” Democrats and Republicans.  John Knight Shields was reelected to another six-year term in 1918 in a hotly contested race when he had been challenged for the Democratic nomination by Governor Tom C. Rye.  Shields managed to carry East and West Tennessee with some effort.  Once reelected, Shields had incensed many Tennessee Democrats for his refusal to support President Woodrow Wilson and the League of Nations.  The senator’s personality was such that even many of his friends and appointees were frequently offended by his behavior.

Tennessee’s junior United States senator was Kenneth D. McKellar, the first person ever to be popularly elected by the people of the Volunteer State to the Senate.  McKellar had defeated an incumbent senator and two former governors to reach the Senate.  K. D. McKellar’s successor as congressman from the area surrounding Shelby County was Hubert Fisher, who had previously served as the U. S. Attorney for West Tennessee.  Fisher’s brother-in-law was Edward T. Sanford.  When Fisher first informed McKellar a Tennessean was being considered for the Supreme Court, the senator replied it was none of his business and the Republicans would decide the nominee for themselves.  Undeterred, the persistent Fisher visited McKellar’s office, bringing along two of the judge’s brothers with him.  Fisher and the Sanford brothers begged McKellar for a “suggestion” as to how they could get Judge Sanford nominated for the high court.  The exasperated McKellar replied he had none; he would have no influence, reiterating the Republicans would settle it amongst themselves.  Hubert Fisher and the Sanford brothers were so dejected that McKellar sighed and said he would give the matter some thought and see what he could do.

As it turned out, there was quite a lot the wily McKellar could do.  The first thing he did was to pay a call upon the Republican leader of the U. S. Senate, Henry Cabot Lodge of Massachusetts.  McKellar asked if the ordinarily icy Brahmin knew Judge Sanford.  “No,” Lodge replied, “and I’m not going to let you get me mixed up in your Tennessee politics, either.”  In his book Tennessee Senators, McKellar wryly recalled Lodge frequently complained the Tennessean wielded undue influence with the GOP Leader.  Knowing of Lodge’s veneration of his alma mater, Harvard University, Senator McKellar casually wondered, “Did you know Judge Sanford had graduated at Harvard, cum laude?”

McKellar’s question had its intended effect, as he recalled Lodge’s reaction was akin to an “electric shock.”

Lodge then asked McKellar how he could help Judge Sanford and offered to do whatever he could on the judge’s behalf.  Never one to let a good opportunity go to waste, McKellar quickly replied he wished Senator Lodge would see President Harding as soon as possible.  Lodge made an appointment at the White House, saw the president and told Senator McKellar that Harding appeared to be friendly to Judge Sanford.  Lodge suggested McKellar get as many Republican senators as possible to urge Sanford’s appointment.  Lodge added, he thought it a good idea for McKellar to see the president as well.

The energetic Tennessean soon had rounded up “some twenty or thirty” Senate Republicans to urge the appointment of Judge Edward T. Sanford to the Supreme Court of the United States.  Things looked quite good for Judge Sanford until Senator James E. Watson of Indiana, a GOP stalwart, telephoned McKellar and asked to see him right away.  Upon arriving in Watson’s office, McKellar received the news President Harding was sending the Senate a nomination to the high court and it was not going to be Judge Sanford of Tennessee.  Evidently, McKellar’s irascible colleague, John Knight Shields, had told the White House he would fight the nomination of Judge Sanford.  Wishing to avoid a fight in the Senate, Harding simply decided he was going to nominate someone else.  Senator McKellar instantly objected, telling Watson it could not possibly be true as he had spoken to Shields about Sanford being nominated to the Supreme Court.  According to McKellar, while the cantankerous Shields admitted he did not like Sanford, he had grudgingly agreed to vote to confirm Sanford’s nomination should the president nominate the judge.  McKellar hurried to the office of his senior colleague and repeated his conversation with “Sunny Jim” Watson.  Senator McKellar asked Shields if he could tell both President Harding and Senator Watson that the senior senator from Tennessee would indeed vote for Judge Sanford’s confirmation.  Senator Shields grunted that he could.

Senator McKellar then made his way to the offices of Virginia senators Claude Swanson and Carter Glass.  The leading aspirant for the Supreme Court, aside from Edward T. Sanford, was one Colonel Anderson and the ever-resourceful McKellar recalled both of Anderson’s home state senators were opposed to his nomination and confirmation.  McKellar asked if senators Swanson and Glass remained opposed to the Colonel?  When assured neither had changed his attitude, McKellar wondered if he could convey that information to President Harding?  Both Swanson and Glass replied they would not mind in the least.  Armed with this information, Senator McKellar returned to Jim Watson’s office and told him the Virginians would oppose Colonel Anderson’s nomination.  Senator Watson promptly telephoned President Harding while McKellar was in his office and related the information given him by the Tennessean.  Harding replied he would nominate Judge Sanford that very day and send his name to the Senate for confirmation.

When the news came over the wire and reached the chambers of Judge Edward T. Sanford that President Harding had sent his name to the Senate for confirmation as an associate justice of the Supreme Court, he was quite nearly overcome.  “It is wonderful,” the judge managed to murmur as his legs went out from under him and he sat down with a thud.

Kenneth D. McKellar remains Tennessee’s longest-serving U.S. senator and his relentless approach to doggedly pursuing anything (or anyone, for that matter) he believed to be important to the people of the Volunteer State made him a force to be reckoned with inside the Senate.  One wonders if Edward T. Sanford would have been nominated to the Supreme Court otherwise?

Edward T. Sanford died on March 8, 1930; as to the cause of his death, it could have been from uremic poisoning, the cause of which was due to having a tooth pulled.  It may well have been from a stroke.  What is known is the Justice left his home around 9 a.m. in apparent good health.  Edward T. Sanford was returned home by ambulance and died fifteen minutes later.  Sanford did have some kind episode in the dentist’s office, saying he felt dizzy.  The alarmed dentist summoned a medical doctor whose office was in the same building to attend the stricken justice.

According to contemporary press reports, Sanford asked to remain in the dentist’s chair for a bit and then was moved to a sofa and “hypodermics administered.”  Two hours later, Justice Sanford “failed to respond to treatment and appeared to be sinking.”  An ambulance was called and for some reason, Justice Sanford was returned to his apartment rather than a hospital.  Almost unconscious, Sanford died following “convulsions.” He was sixty-four years old.

Sanford and former president and Chief Justice of the Supreme Court William Howard Taft died on the same day within hours of one another.  Ironically, during Taft’s final illness, Justice Sanford routinely called at the former Chief Justice’s home daily to inquire after his friend.

At the time of Sanford’s death, Tennessee’s U. S. senators were K. D. McKellar and William E. Brock of Chattanooga, the candy king and grandfather of future GOP congressman and senator William E. Brock, III.  Like everybody else, Senator Brock was shocked by the sudden passing of Justice Edward T. Sanford.  Brock had only recently taken a visitor to the Supreme Court chamber where the justices sat and pointed with profound pride to Sanford’s seat.  Brock expressed the thoughts of many when he lauded Sanford, saying, “A kinder and more noble character never lived; a man who was loved and admired and respected by all who came in contact with, and to know him as we knew him back home was to love him as we loved him.”

Congressman J. Will Taylor, like everybody else, was shocked by the Justice’s passing.  Taylor recalled his earlier experiences as a young member of the Bar with Edward T. Sanford.  “His untimely death, at almost the threshold of a brilliant career on the greatest tribunal in the world, is a distinct national calamity,” Congressman Taylor said.

Congressman Cordell Hull remembered Sanford as “one of the real lawyers of the country.”  Hull said, “No Tennessean was more admired or idolized by all who knew him more than Justice Sanford.”

Senator K. D. McKellar, the man who almost certainly had more to do with the appointment of Edward T. Sanford to the U.S. Supreme Court, was conspicuously absent from the memorials being collected by the news media of the time.  The reason for McKellar’s silence was tragedy inside his own family.  Senator McKellar’s grief at the passing of his friend Justice Sanford was overshadowed by the death of his seventy year-old sister, Mary.  Mary McKellar was nine years older than the senator and had been ailing for the last couple of months.  Mary had been heavily involved in “charity and religious work” in Memphis.  Despite her family being Presbyterians, Mary was herself a Baptist.  Like most of the McKellar clan, young Mary clearly had a mind of her own and had picked her own denomination in early girlhood.

Mary’s quick decline was unexpected and came as a surprise to the senator who was notified in Washington his sister was gravely ill.  The senator had hurriedly left Washington.  McKellar’s hasty trip home allowed the senator to arrive less than one hour before his sister died.  The bachelor senator maintained a home in Memphis where he lived with his mother and two of his sisters until they were all gone.  McKellar sat quietly by Mary’s bedside and quietly held her hand as her life flickered out.